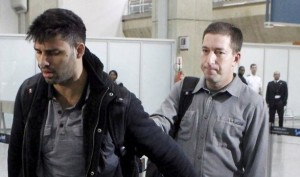 The UK government is aggressively defending its decision to detain David Miranda (above, left), the partner of Glenn Greenwald, for nearly nine hours at Heathrow Airport, seizing his laptop, camera, cell phone and other personal items. Miranda was detained under a UK terrorism law while traveling from Berlin to his home in Rio de Janeiro.

The detention of Miranda was a blatant act of political intimidation directed at all those who seek to reveal crimes and conspiracies against democratic rights carried out by the British and US governments, including former NSA contractor Edward Snowden.

Snowden, who has worked closely with Greenwald, is currently exiled in Russia. He has been the subject of an international campaign of vilification, led by the Obama administration.

According to a report by the Reuters news agency, “One US security official told Reuters that one of the main purposes of the British government’s detention and questioning of Miranda was to send a message to recipients of Snowden’s materials, including the Guardian, that the British government was serious about trying to shut down the leaks.”

In other words, the detention had nothing to do with “terrorism” or “national security,” but was, rather, a political decision. This decision clearly involved the highest levels of the US and British governments. On Monday, a White House spokesman acknowledged that the Obama administration had been given a “heads up” about the planned detention.

British Prime Minister David Cameron also had advance notice of the plans to detain Miranda, Downing Street confirmed yesterday. The Guardian quoted a source within the government as saying, “We were kept abreast in the usual way. We do not direct police investigations.”

The suggestion from the UK government that somehow the final decision was made by local police agencies is a fraud. The approval of Miranda’s detention clearly came from No 10 and the White House.

A UK government spokesperson issued a statement yesterday defending the action, saying that, “the government and the police have a duty to protect the public and our national security. If the police believe that an individual is in possession of highly sensitive stolen information that would help terrorism, then they should act and the law provides them with a framework to do that.”

The statement went on to threaten: “Those who oppose this sort of action need to think about what they are condoning.”

UK Home Secretary Theresa May also acknowledged that she was briefed on the plans to detain Miranda. “If the police believe somebody has in their possession highly sensitive stolen information then it is right that the police act,” she said. These documents could help terrorists and “lead to a loss of lives.”

That is, the exposure of massive and illegal spying programs run by the US, UK and other governments is equated with aiding terrorists. With such arguments, the government is preparing the ground for even more direct action targeting those who have revealed these criminal programs.

London’s Metropolitan Police also defended the detention of Miranda, calling it “legally and procedurally sound.” Scotland Yard issued a statement declaring, “The examination of a 28-year-old man under Schedule 7 of the Terrorism Act 2000 at Heathrow Airport on Sunday 18 August was subject to a detailed decision making process.”

There was nothing “legal” about the seizure of Miranda. A private citizen was held, threatened and had his belongings seized entirely because of his association with a journalist who has worked to reveal government secrets. These are the methods of a police state.

Miranda said of his nine-hour detention, “They were threatening me all the time and saying I would be put in jail if I didn’t co-operate. They treated me like I was a criminal or someone about to attack the UK.” Miranda was refused any explanation for his detention during the nine-hour period, was not allowed an interpreter (his primary language is Portuguese), and was not even allowed a pen.

Miranda is arguing that the seizure of his equipment and data by the police was illegal. A letter from Miranda’s legal counsel asserts that Miranda’s detention was an illegal “deprivation of liberty,” violating article 5 of the European Convention on Human Rights.

Comcast, Time Warner Cable, Verizon and Other Telecoms Fighting to Cash In… on You

The Syrian (Government) Use of Chemical Weapons—the Story that Won’t Go Away—Why?