Home AMERICAN EXCEPTIONALISM The Dreamer With a Kill List 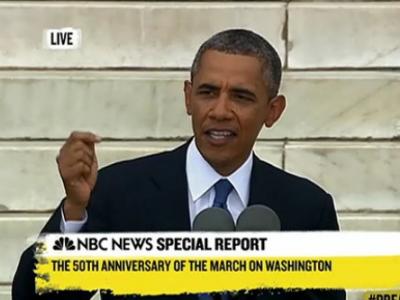 The most powerful – and violent – man in the world was made the star of the commemoration of the March on Washington and Dr. Martin Luther King. “The grave-markers of the martyrs of the Black Freedom Movement – in their thousands – have been reduced to cobblestones on the road to the Obama presidency.”

“This week’s events sent a message to the world that the historical Black struggle for social justice and peace was nothing more than a ploy to achieve proximity to Power.”

Just before launching yet another unprovoked war to preserve the empire, Barack Obama stopped by the Lincoln Memorial to star in the commemoration of the 1963 March on Washington. He was joined by former presidents Jimmy Carter and Bill Clinton, the men most responsible for pulling the Democratic Party deep enough into the corporate camp to afford the billion dollar elections that brought Obama to power. The pretense was that the presidents were there to show solemn respect for the Movement that defeated official American apartheid. The truth is, they came to take possession of the occasion – a gift from their minions in the Black Misleadership Class, who believe nothing has value until it is blessed and possessed by Power.

Literally no one will remember what Al Sharpton was barking about at last Saturday’s mass gathering on the Mall; he said not a word that was not slavishly consistent with White House talking points. Nor, in his role as the administration’s chief pit bull and overseer, did Sharpton allow any of the vetted mic-seekers to utter a syllable that might discomfort his masters (although oblique digs at the Republican side of the corporate duopoly were permissible).

If the commemoration were simply another pep rally for Democrats, like the “One Nation” rally staged at the Mall by the same actors just before mid-term congressional elections in 2010, it would rank among the Black Misleadership Class’s many petty corruptions. However, this week’s events sent a message to the world that the historical Black struggle for social justice and peace was nothing more than a ploy to achieve proximity to Power.

“No social transformation, just a change of coloration.”

The grave-markers of the martyrs of the Black Freedom Movement – in their thousands – have been reduced to cobblestones on the road to the Obama presidency. In Sharpton’s grasping, narrow vision, the great mass struggles of half a century ago amounted to nothing more than Blacks bum-rushing the velvet ropes so they could party with the elite. No social transformation, just a change of coloration. No world peace, just a piece of the imperial pie.

The problem, of course, is not Sharpton’s personal vulgarity and corruption, but the worldview that he shares with the whole cabal of Black misleaders. To put it simply, they never agreed with Dr. Martin Luther King on the need for a “revolution” that is “international in scope” and would force the United States to “repent of her modern economic imperialism,” as historian Paul Street notes in this issue. They do not share Dr. King’s socially transformational “dream.” Indeed, they have no core vision at all, other than that Black American individuals be widely represented within structures of power in the United States: Black titans of Wall Street, Black generals and – the ultimate prize – a Black president.

“No world peace, just a piece of the imperial pie.”

In that sense, the Black Misleadership Class’s “dream” arrived in 2008. Baraka Obama is the great prize, the racial victory that must be defended at any and all costs. The collapse of the Black economy, the evisceration of the Constitution, mass Black incarceration, multiple and constant U.S. wars against weaker peoples – none of this can be allowed to tarnish or undermine the embodiment of Black progress, Barack Obama. Which is why it is perfectly logical to Sharpton and Ben Jealous and their ilk that Obama star in the March on Washington commemoration, as both the symbol and the personification of “The Dream.” It is the dream of those who want nothing more than to become full-fledged partners in U.S. imperialism.

It is inconceivable that Dr. King would share the stage with a president who was at that moment preparing a savage and illegal attack on a sovereign country. Dr. King’s voice has been censored and his dream vandalized, repackaged and presented as a gift to a corporate agent with a Kill List.

BAR executive editor Glen Ford can be contacted at Glen.Ford@BlackAgendaReport.com [8].

OpEds: Never Mind Whether Obama’s Red Line Has Been Crossed—Is It Even Legitimate?

Dr. King Was A Man, “The Dreamer” Is A Zombie