Home ANTI-CORPORATISM The week ahead: A propaganda barrage to prepare for war in Syria

The week ahead: A propaganda barrage to prepare for war in Syria

The Obama administration is determined to carry out its war—a war for oil, plunder and geo-strategic advantage—regardless of the facts, public opinion, international and domestic law, or the consequences in the squandering of human life and treasure. 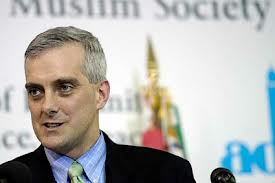 Denis McDonough: Whoring for the empire. This is the type of man who’s bringing the world to its ruin.

As the US Congress convenes to vote on war in Syria this week, and UN investigators prepare their report on the alleged August 21 poison gas attack in Ghouta, the US government and media are preparing a massive propaganda blitz to push for war. Its aim is to intimidate public opinion, which is overwhelmingly hostile to an attack on Syria, and stampede the population into a far-reaching Middle East conflict.

White House Chief of Staff Denis McDonough laid out the Obama administration’s plans over the weekend, saying: “We set a goal this week of making sure people understood the facts of the case. No one with whom I’ve spoken doubts the intelligence. We’re not really debating the veracity of the central charge.”

[pullquote] In public relationese, the coded language that Washington insiders use, making people “understand the facts of the case” means to intensify the propaganda until the public’s will to resist the proposed crimes is overcome. [/pullquote]

They cannot debate the “central charge”—that the regime of Syrian President Bashar al-Assad carried out a chemical attack on August 21 that killed hundreds of people—because it is a fabrication for which they have no credible evidence.

Almost no one outside of a small cabal of White House and intelligence operatives believes the pack of lies and unproven charges that McDonough calls “the facts of the case.” Ten years after the world was dragged into a war based on lies about weapons of mass destruction in Iraq, overwhelming majorities of the populations of both America and Europe oppose another war of aggression in the Middle East.

Even the British Parliament felt compelled to vote on August 29 against war, as it became clear that the brief for war of Prime Minister David Cameron—who was forced to admit that there was “no 100 percent certainty” that Assad carried out the Ghouta attack—had no factual basis.

But the Obama administration is determined to carry out its war—a war for oil, plunder and geo-strategic advantage—regardless of the facts, public opinion, international and domestic law, or the consequences in the squandering of human life and treasure.

That is why in the days ahead, no lie will be too great, no claim too illogical, no contradiction too flagrant for the Obama administration’s top officials to proclaim, and for the media to echo.

Pressure will be exerted to obtain a sufficient number of votes in the Senate and the House of Representatives to pass bills authorizing an open-ended use of military violence—not only against Syria, but potentially against its allies such as Iran, Hezbollah and Russia. This will be described to the American people as a “limited,” “proportional” and “targeted” campaign.

“Wavering” lawmakers will declare that they have been won over by the government’s iron-clad case. At the same time, the administration and the media will try to condition the public for war, even if Congress should fail to authorize military action.

Behind the scenes, UN inspectors and officials will be subjected to threats and financial blackmail to ensure that their report lends a fig leaf of legitimacy to US war propaganda.

On Sunday, White House Chief of Staff McDonough told NBC’s “Meet the Press” that “the common-sense test” proves that Assad is responsible for the Ghouta attack. That is, the government’s case does not rely on facts and evidence, but bald assertions backed up by threats and bullying.

In fact, “common sense” argues that the CIA-backed opposition, not Assad, gassed Ghouta. Assad’s forces, who were winning on the battlefield, had nothing to gain from a gas attack that would provide the pretext for US military intervention against them. It was the opposition, dominated by Islamist sectarian killers linked to Al Qaeda, who benefited from the attack.

The opposition has already used poison gas. Washington suppressed the UN report on the last major chemical weapons attack in Syria, the gassing of Khan al-Assal in May. UN official Carla Del Ponte confirmed at the time that UN investigators concluded the opposition was responsible.

The New York Times, as it did in Iraq and Libya, is doing its part to inundate the public with pro-war propaganda and provide credibility for a criminal war. On Sunday, it carried a front-page lead article luridly describing Syria’s chemical weapons arsenal, just as a decade ago it served as a conduit for CIA lies about Iraqi weapons of mass destruction.

It wrote of the coming war propaganda blitz: “The advocates will carry a simple message… Syria is a proxy for Iran, and the failure to enforce Mr. Obama’s ‘red line’ against the use of chemical weapons by Mr. Assad will be interpreted in Tehran as a sign that he will not enforce a red line against the production of nuclear weapons by the Iranian government.”

This is a new version of the nuclear bogeyman that was used to justify war against Iraq, presented at the time as the only way to prevent a nuclear “mushroom cloud.”

Nicholas Kristof—the New York Times ’ resident “humanitarian” columnist who, from Tibet to Darfur, is always finding someone for the CIA to liberate—published a column on Sunday slandering opponents of the war as indifferent to the murder of children. Pushing for war with Syria as the “least bad option,” he declared: “When the textbooks count the dead children, and the international norms broken with impunity, will our descendants puzzle that we took pride in retreating into passivity during this slaughter?”

No, Mr. Kristof, they will conclude that leading figures of the American corporate press such as yourself propagandized for a criminal US war in Syria and beyond, based on lies, in alliance with Al Qaeda death squads, costing the lives of hundreds of thousands of people. They will conclude that it was up to the Syrian working class, not US imperialism and far-right Islamist terrorists, to topple the Assad regime.

Kristof’s colleague, the unspeakable Thomas Friedman, even praised a US onslaught against Syria as part of a struggle for Middle East democracy, calling it the road “from Saddam to Jefferson.” He enthused that Syria and Iraq will “devolve into self-governing, largely homogeneous ethnic and religious units … And if we are lucky, these units will find a modus vivendi, as happened in Lebanon after 14 years of civil war.”

Such praise by a leading columnist of sectarian civil war in Syria as part of a struggle for “democracy”—after it cost over one million lives during the US occupation of Iraq—testifies to the degeneration of the entire American ruling elite.

It is necessary to mobilize, organize and unify the broad popular opposition to war. Meetings, demonstrations, teach-ins should be held at workplaces and schools and in communities around the country. The center of opposition to war is in the working class. This is the social force that can and must be brought forward to stop the war drive, linking this fight with opposition to the assault on social conditions and democratic rights.

This movement must be armed with a clear political program. All attempts to channel opposition to war behind protests to Congress and pressure on the Democrats must be rejected. The fight against imperialist war is inseparable from the fight against capitalism—the source of war, poverty and repression. The working class and youth must be mobilized independently on the basis of a socialist and revolutionary program.

Alex Lantier is a senior analyst with the wsws.org, an information arm of the Social Equality Party.

THE AUSTRALIAN CHEWING-GUM IS NOW ON THE RUSSIAN...

Will Trump Really Start Two Wars Instead of...

THE SOVIET VICTORY OVER NAZISM 75 YEARS AGO,...