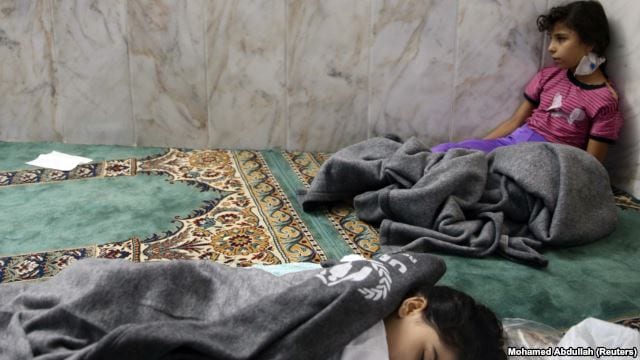 Survivors of sarin attack. The “who” question remains very much in doubt but data manipulation seems evident.

The United Nations report on the alleged use of chemical weapons in the Ghouta area of Damascus on August 21 does not, as newspaper headlines have indicated, “point to Assad’s use of gas” [1]; confirm that rockets were loaded with sarin [2]; or “come closer to linking Assad to sarin attack” [3]. Nor, as US officials and some journalists have declared, does it “reinforce the case that Mr. Assad’s forces were responsible” [4]; “confirm Damascus’s responsibility” [5]; or “undercut arguments by President Bashar al-Assad of Syria that rebel forces … had been responsible.” [6]

This isn’t to say that Syrian forces didn’t use chemical weapons, only that the evidence adduced in the UN report doesn’t show, or even suggest, that they did. On the contrary, the report offers stronger evidence that attempts were made to manipulate evidence to attribute blame to the Syrian government.

The report concludes that “chemical weapons have been used in the ongoing conflict between parties in the Syrian Arab Republic, also against civilians, including children, on a relatively large scale.” [7]

The UN inspectors adduced five findings in support of their conclusion.

• “Impacted and exploded surface-to-surface rockets, capable to carry a chemical payload, were found to contain sarin.
• “Close to the rocket impact sites, in the area where patients were affected, the environment was found to be contaminated by sarin.
• “Over fifty interviews given by survivors and health care workers provided ample corroboration of the medical and scientific results.
• “A number of patients/survivors were clearly diagnosed as intoxicated by an organophosophorous compound.
• “Blood and urine samples from the same patients were found positive for sarin and sarin signatures.” [8]

• Present evidence that the symptoms experienced by people in Ghouta on August 21 were due to sarin exposure.
• Suggest—but do not confirm—a possible route through which the contamination occurred (delivery of the agent by surface-to-surface rockets.)
• Says nothing about who was responsible.

US officials and their allies have cited the discovery by the UN inspectors of rocket fragments containing sarin to attribute blame to Syrian forces. But to make the leap from ‘sarin-contaminated rocket fragments were found’ to ‘Syrian forces carried out a sarin attack’ requires evidence to support two intermediary conclusions:

• The contaminated rocket fragments weren’t planted or manipulated.
• Only Syrian forces could have carried out a chemical weapons attack using rockets.

The report can’t confirm the first conclusion, and indeed, challenges it.

Pages 18 and 22 of the report contain key paragraphs headed by the title “Limitations”.

The time necessary to conduct a detailed survey … as well as take samples was very limited. The sites [had] been well travelled by other individuals both before and during the investigation. Fragments and other possible evidence [had] clearly been handled/moved prior to the arrival of the investigation team. [9]

As with other sites, the locations [had] been well travelled by other individuals prior to the arrival of the Mission. Time spent on the site was … limited. During the time spent at these locations, individuals arrived carrying other suspected munitions indicating that such potential evidence [was] moved and possibly manipulated. [10]

In other words, the inspectors had little time to carefully gather evidence and inspect it in situ; there was plenty of opportunity for the evidence to be manipulated; and the evidence had clearly been handled and moved.

Far from indicting Syrian forces as the culprits, these findings point more strongly to evidence being manipulated, possibly to falsely implicate the Syrian government.

Indeed, as the Associated Press’s Kimberly Dozier and Matt Apuzzo reported on August 29,

U.S. intelligence officials are not so certain that the suspected chemical attack was carried out on Assad’s orders. Some have even talked about the possibility that rebels could have carried out the attack in a callous and calculated attempt to draw the West into the war. [11, 12]

In summary, here’s what the UN report says: On August 21, people in Ghouta were exposed to sarin. We don’t know how they were exposed and who was responsible. But we do know that evidence in connection with rocket fragments was possibly manipulated.

Concluding that the UN report adds to the evidence linking Syrian forces to the August 21 incident, as US officials and some US mass media have indicated, is misleading. First, there was no hard evidence of Syrian culpability to which the UN report could be added. An earlier assessment by the US intelligence community was “thick with caveats.” [13] Second, the UN report, like the US intelligence community assessment, offers no evidence linking the Ghouta incident to Syrian forces.

US officials are reading far more into the evidence than the evidence allows, and US mass media are docilely following the officials’ lead. Anti-Syrian forces have adopted a ridiculously lax evidentiary standard to allow themselves to find the target of their hostility guilty of gassing non-combatants on, at best, flimsy evidence. One can only conclude that they’re motivated to discredit the Syrian government to facilitate the project of bringing about regime change in Damascus—a project these parties are overtly committed to.

• The United States and its allies have a motive to blame the Syrian government for using chemical weapons in order to establish a pretext to step up their intervention in Syria’s internal war. In light of this, it would be expected that they would be inclined to favor very liberal, over-reaching, interpretations of evidence to create a casus belli.

• Once Washington declared that the use of chemical weapons by Syrian forces would trigger an overt intervention by US forces, the rebels had a motive to stage a chemical attack in order to blame it on Syrian forces.

• Syrian forces had a motive to refrain from using chemical weapons to avoid crossing the United States’ red line.

In light of these motives, the most probable scenario is that a sarin attack was carried out by rebel forces to draw the United States more fully into the war and that Washington and its allies have set their evidentiary bar deliberately low to read Syrian culpability into the flimsiest of evidence. The objective is to achieve what US foreign policy has long set as its principal goal: to topple governments that stand in the way of the expansion of economic space for private ownership, market regulation and profit accumulation.

What makes Syria’s government an object of hostility for the big business-dominated US state is its denial of complete freedom for foreign capital to exploit Syrian markets, land, resources and labour. [14] Added to this is Damascus’s refusal to fully cooperate in supporting US geopolitical goals (which are themselves linked ultimately to US profit-making interests.) “Syria,” says the country’s president “is an independent state working for the interests of its people, rather than making the Syrian people work for the interests of the West.” [15]

Syria’s insistence on maintaining its independence, the US government’s long-standing hostility to foreign governments that demand to be allowed to chart their own course, the rebels’ interest in staging a gas attack to blame on Damascus, Washington’s reading far more into the evidence than the evidence allows, and the absence of any hard evidence linking Syrian forces to the Ghouta incident, suggest that the Syrian government is being set up.

The UN report does nothing to challenge this view. If anything, its noting that evidence was moved and possibly manipulated, supports it.

Stephen Gowans is founding editor of What’s Left. He is also one of Canada’s leading social justice and political activists and analysts.

A Secular Humanist Jew’s Thoughts on Yom Kippur: On Atheism and Theism, and on Religion and Organized Religion