Even Hong Kong Has Started to Ban Shark Fins 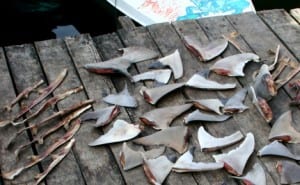 Hong Kong, the world’s biggest trade hub for shark fin, has announced that the traditional Chinese delicacy will no longer be served at official banquets. Given that about 80 percent of shark fin products pass through Hong Kong from 100 different countries, the government’s decision could have far-reaching ramifications.

74 species of sharks are currently listed as vulnerable, endangered or critically endangered, says the International Union for Conservation of Nature. An estimated 100 million sharks are killed each year according to scientists. In most cases, after their fins are cruelly hacked off, the finless sharks are thrown overboard to die.

While lauding Hong Kong authorities, the WWF also called on them to keep statistics on the shark fin trade, so that consumers have a better idea as to whether they might be purchasing, and potentially eating, an endangered species.

Pressure from environmentalists for the government to better account for how much shark fin is purchased and from what sort of sharks played a part in Hong Kong issuing the ban. In March, member nations of the Convention on International Trade in Endangered Species of Wild Fauna and Flora (Cites) had called for extensive tracking of five shark species (oceanic whitetips, scalloped hammerheads, two other types of hammerheads, and porbeagles), to ensure that any harvesting of them was done legally. This requirement has “put shark fin consumers in Hong Kong, on mainland China and elsewhere in an awkward spotlight,” comments the New York Times.

When I was growing up in Oakland in the 1970s, my Chinese American relatives made it very clear that shark fin soup was a rare, expensive delicacy, only to be served at the most special of occasions. I was admonished to savor every last drop. But over the years, shark fin soup started to make an appearance on the menus of more and more family gatherings and not only at “really big ones” like weddings.

In May of 2011, California banned the sale and distribution of shark fin, a long-overdue change. To many second- and third-generation Chinese Americans like myself, tradition is great, but there are plenty of other things to eat and the suffering and killing of endangered sharks is simply senseless.

Overseas, the rise of the middle class in China and throughout Asia has led to an increased demand for shark fin. As environmental awareness increases, more Chinese have reported declining interest in eating shark fin. The Chinese government banned the serving of shark fin soup at official banquets last year, but have allotted three years for the measure to go into effect.

“Determined to take the lead and set a good example on this front,” the Hong Kong government is not only banning shark fin at official functions but also bluefin tuna (whose numbers have fallen by half over the past forty years) and another delicacy, black moss. The latter is called fat choy in Cantonese, a phrase that sounds like “struck it rich.” But farming of this cyanobacterium has led to desertification in Mongolia and parts of northern China.

The Hong Kong government says that it will “keep in mind local and international trends on green living in line with a sustainability-conscious lifestyle and update the list of items from time to time.” Sharks are not the only endangered species that have been known to appear on menus in Hong Kong and China. If Hong Kong wants to live up to its claims of being “sustainability-conscious,” banning shark fin at official functions is just the start. The next step must be to ban the purchasing and distribution of shark fin, period.

Italy’s Health Care System Is Much Better than Ours!