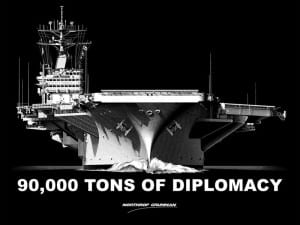 It is a common misconception that the power and might of the US is waning because of such ‘set-backs’ as the agreement forced upon it by the Russians on Syria’s chemical weaponry. On the contrary, the US fully employs the constant threat of the might of its military and does not even need to go to actual wars to press its demands. It will get what it wants with the destruction of Syria’s threat to Israel as demonstrated by the fact that Kerry went directly to Israel after the agreement was signed to assure Israel’s government about his achievement of a much diminished pressure from Syria on Israel.

Israel is after all the heavily fortified outpost of US power controlling the sea lane of the Suez Canal much like the Rock of Gibraltar fulfills a function for the British government for control of the narrows of the sea lane entrance into the Mediterranean. Yemen may well be the next project to be tackled because it is at the narrow entrance to the Red sea (as the US is already proving by its drone actions on that country). Securing the tactically important access into the Mediterranean has been a project for a long time and Turkey has to be controlled carefully not to evoke too much pressure from Russia about its own access though the Dardanelles.

America’s strength grows exponentially with its financial banking power which rests on the fact that the dollar remains the world’s reserve currency used for all transactions in basic energy resources. Threats to its financial hegemony by such as Saddam Hussein and Muammar Gaddafi to transfer payments for their raw energy products into the European Euro have been effectively and quickly resolved by their overthrow and elimination. Neither Russia nor China forms much of a threat to the US commercial and military enterprise because both large nations have huge problems with their own building up of prosperity for their populations. We live in a uni-polar world entirely regulated by US demands and requirements.

In fact it is highly probable that the 2008 financial crash was very carefully engineered to considerably weaken the world economy in order for the US to strengthen its control which was cemented by heavily investing its public funds into the Wall street banks that in fact form the core of its power. There is therefore no separation of government and the financial institutions as there was no difference between the government and industry in the years between 1940 and 1970. The common purpose is and has been to form a strong block of undivided totalitarian-like interests to control the Western hemisphere. That this is no longer very easy does not detract from the fact that the power of the US is not at all diminishing but is remaining vital, despite heavy competition from the increased world production of goods. The US acts and the world reacts.

Every political executive is carefully vetted before installation so that every president represents the US power block whether he/she was elected from either branch of the ruling Democrat / Republican Party. The debate about the vote and its restrictions has only propagandistic value, as in the end it does not matter who is elected because the power block is being served in whatever shape or flavor the president and congress come. In the mean time of course the nation is entertained by the jockeying for position of the basically identical candidates on television and in the newspapers. Indeed the engineering of the public mind is so strong that the myth of such as the belief in ephemeral American values is still pressed as a fine promise of happiness that the whole world should follow. Individual freedom is praised despite the fact that opinion is carefully being shaped from kindergarten onward and great care is being taken that homogeneity of support is never broken for what are still called the democratic principles of the Republic.

The clearest example of public opinion engineering is the recent Kerry/Lavrov agreement on Syria’s chemical weapons. The US may never even have intended to attack Syria and Kerry’s ‘mistake’ of uttering the word “inspection” really meant “dismantling”, after his absurd war-like performances before the senate and representatives committees. Real strength lies in hypocritical meekness and the sanctimonious expressions of relief by the president. Which fall neatly in line with the foreign policies that allow an even stronger US after the 2008 events, and to exert pressure without military force (the threat alone will do ). In fact Andrew Cockburn recently outlined that old but very effective cruel foreign policy to isolate resistant nations by economic blockade in his article “A Perfect Instrument”. War is redundant in this policy; we can starve nations into submission. And should that create some extremist movements, then quick military action will take care of the problem.

The circle of containment is complete. The US has determined what the parameters are for its sphere of influence. Interest in South America has waned and it is considered more or less a lost cause after its populist movements of the last years. The Pacific remains a vital area for restricting Chinese influence, but a compliant Japan is in the way and the distances are such that a direct threat remains remote. But Africa and the Middle East appear to fascinate by the abundance of available raw materials and strategic importance. There is where one sees the constant signs of US involvement and its competition with Russia and China. And because direct conquest is geared towards full destruction of the countries attacked, it is clear that pacification for business purposes is not sought. Rather it appears that control over the supplies of oil and raw materials is secondary, but that it is clearly a struggle for the control of access to those materials by competitors like Russia and China.
[pullquote] Every political executive is carefully vetted before installation so that every president represents the US power block whether he/she was elected from either branch of the ruling Democrat / Republican Party. The debate about the vote and its restrictions has only propagandistic value, as in the end it does not matter who is elected because the power block is being served in whatever shape or flavor the president and congress come. [/pullquote]

The US sees itself as self sufficient to a large degree and able to regulate the supplies of materials that it needs from other parts of the globe. The financial primacy and power of its banking system guarantees and protects the base of its power. The stasis of this system is remarkable but because of its financial greed, it will over time hollow out the power of the US from within. It is a self devouring system which excludes too large a part of the US population. Exhortations of exceptionalism and free enterprise will not sustain very long the obvious status differences that emerge to the surface of a gleaming and steely propaganda class structure that gets shriller every day. The more the public is faced by poverty and disorder in the large cities and their own nearness to it in essence and reality in full contrast to the opulence of the favored classes, the more justifiably resentment will grow. Power breeds contempt and with it blindness to the effects of its own misuse. That is where empires fail and though the days of its decline still seem to be far off, the day will surely come that the public will rise up and put paid to the betrayals of government. The increasing gun violence and the lateral hostility in the poorer districts are already a clear telltale of intense frustration with the status quo.

Though nature may well intervene beforehand and create a fitting end to all human endeavor.

Gui Rochat is an art dealer and consultant, specializing in in seventeenth and eighteenth century French paintings and drawings. He lives in New York.