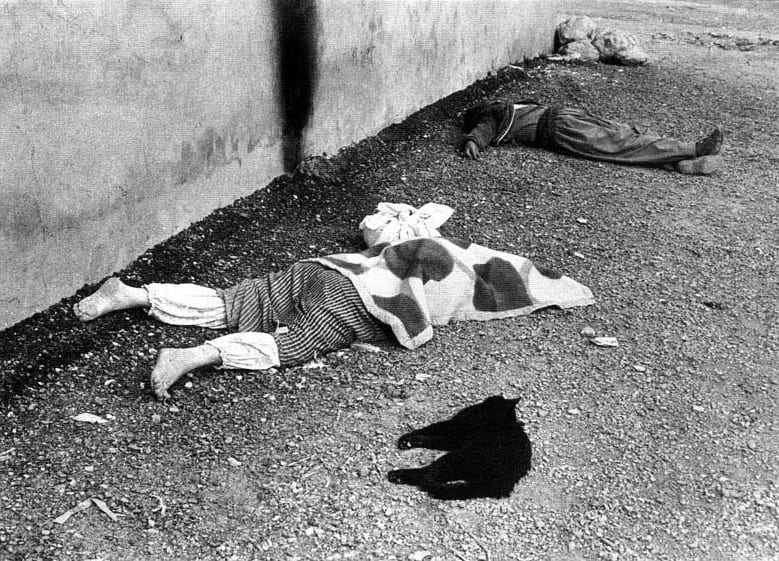 1. Which of the following is the most accurate statement?

1. chemical weapons were first used during the First World War

2. chemical weapons were invented and first used in the 19th century

3. chemical weapons have been around since prehistoric people first put poisons on arrowheads

4. the first real chemical weapon was “Greek Fire” invented by the Byzantines in the 7th century

5. chemical weapons were first produced in the 18th century, based on formulae found in Leonardo da Vinci’s rediscovered writings

2. An international conference in 1899 produced the Hague Treaty, which bans the use of projectiles containing poison gas in warfare. Only one country’s representative dissented. What country was this?

3. In the First World War, what percentage of fatalities were due to chemical weapons?

4. In April 1917, British forces used poison gas against German and Ottoman forces in

5. Who made the following comment in May 1919, regarding the use of mustard gas against Mesopotamian Arabs?

“I do not understand this squeamishness about the use of gas…I am strongly in favor of using poisoned gas against uncivilized tribes… It is not  necessary to use only the most deadly gasses: gasses can be used which cause great inconvenience and would spread a lively terror and yet would leave no serious permanent effects on most of those affected.”

7. During the First World War, Germany was the largest producer of chemical weapons. What country was number two?

9. At the Washington Arms Conference of 1922 which country opposed inclusion in a treaty of an article banning chemical weapons?

10. Over 60 U.S. merchant seamen were killed by mustard gas in an Italian port in December 1943. Why did this happen?

1. The ship was accidently attacked by a British submarine, with torpedoes armed with mustard gas

4. The gas was aboard their ship and released when German forces bombed it

5. None of the above

11. How many tons of chemical weapons material did the U.S. at peak inventory?

1. The U.S. never built or stockpiled such weapons

1. by the ancient Greeks

3. by scientists at Harvard University in 1943

4. by Dow Chemical Corp. during the Vietnam War

5. by the Japanese military during World War II

13. Which president announced that the U.S. would not be the first to use chemical weapons?

1. A mix of petroleum plus a gelling agent that sticks to skin and causes severe burns when ignited

2. A gas that causes asphyxiation

3. A type of explosive bullet

4. An invisible gas released at low altitude by helicopters

16. Up to March 1992, according to a Senate study, the U.S. licensed export of anthrax and VX nerve gas to which country among the following?

17. In March 1988 Iraqi forces attacked Kurds in northern Iraq with chemical weapons, killing over 3000. How did the U.S. react?

1. The State Department stated its belief that Iran was behind the attacks

2. Pres. Reagan declared Iraq in violation of international law and asked Congress for permission to punish it

3. U.S. officials openly argued that since Saddam Hussein was a firm ally against Iran the U.S. had to overlook his war crimes

4. The U.S. placed Iraq back on its list of terror-sponsoring nations

5. The U.S. halted military cooperation with Iraq in its war with Iran

18. Which of the following countries are believed to possess stockpiles of chemical weapons?

19. The U.S. claims that Syria possesses about 1000 tons of chemical weapons. How many tons does the U.S. still possess?

20.  What countries continue to refuse to ban chemical weapons?

The Chemical Weapons Convention approved by the UN General Assembly that bans use of chemical weapons was first signed by participating nations in what year?

1. 3 (Salon of Athens poisoned the Spartan water supply. Henry III used quicklime against the French. In 1675 the French and Germans agreed to stop using poisoned bullets. Chemical warfare is not only modern.)

2. 2 (The U.S. representative wanted no curbs on U.S. inventiveness.)

4. 5 (Mostly British versus Germans, with the latter winning.)

9.1 (Not surprising, since France was then the world’s leading manufacturer of chemical weapons.)

17. 1 (At the same time anonymous government officials opined that there was no law preventing someone from using weapons of mass destruction on his own people.)

18. 2 (Israel argues that its chemical weapons serve as a deterrent to Syrian attack.)

20. 2 (Now that Syria has signed the treaty, just four countries remain outside it.)

GARY LEUPP is Professor of History at Tufts University, and holds a secondary appointment in the Department of Religion. He is the author of Servants, Shophands and Laborers in in the Cities of Tokugawa Japan; Male Colors: The Construction of Homosexuality in Tokugawa Japan; and Interracial Intimacy in Japan: Western Men and Japanese Women, 1543-1900. He is a contributor to Hopeless: Barack Obama and the Politics of Illusion, (AK Press). He can be reached at: gleupp@granite.tufts.edu