Kirdasa: The Egyptian Hama
by MOHAMED MALIK and MOHAMAD OMAR
Giza.
This article first appeared on Counterpunch, to which we are indebted

Various reports have been floated in the media about the events at Kirdasa yesterday, such as 15 police officers were killed, which led to a full army assault with tanks and helicopters, many dead and hundreds injured. The town was surrounded as Hama, Syria, had been, during the fateful massacre of 1982 when Hafez al-Assad, Bashar’s father, decided to bludgeon the Muslim Brotherhood in Syria to death. The similarity is not superficial, for Kirdasa is indeed one of the towns that strongly supports the Muslim Brotherhood and had been the subject of a similar attack by Gamal Abdel-Nasser’s military in 1954.

Except that all the talk of 15 police officers being killed there was just Egyptian media propaganda, automatically trotted out by everybody else. Local residents talk about 1 police officer being shot by the army for not obeying orders, and the fact that the Muslim Brotherhood in Kirdasa has been virtually wiped out by constant and recurring arrests in view of the fact that Kirdasa has had a strong showing in the continuing national demonstrations against the coup. The army assault was in fact unprovoked and merely part of a plan to attack those towns that seemed to supply the most participants to the national demonstrations. Another such town which was subjected to a vicious assault was Delga, recently in the news.

Of our original group demonstrating at Nahda square in Giza, we reported the death of Mohamed Osman after the military assault on our protest camp, after we left to join a demonstration at Mohamed Mahmoud square in Mohandseen on 14th August. At the same time we reported that Muhannad Ramadan survived a shot to the head, but lost sight in both eyes. Muhannad unfortunately had just died from his wounds. Hosam al-Zomoor who had been arrested on the 16th August ‘Day of Rage’, and who endured the travails of Egyptian police cells ever since, was finally released two days ago with serious injuries suffered during his captivity into hospital care.

Egypt, a normally vibrant country, despite its poverty is sinking into despair and oblivion. Demonstrations continue every day despite the continuing arrests. Civil disobedience in the form of refusing to pay bills and withdrawing money from the banks has put pressure on the banks and the utilities, with widespread blackouts now beginning to affect commercial activity. The 22nd September is now announced as a day of inducing major disruptions to road and rail traffic.

But the military is unrepentant and appears to want to continually up the ante. Just as the demonstrations will not stop, Sissi, the leader of Egypt’s junta, who has recently been compared with Pinochet of Chile, will never give in of his own volition. More and more news keeps on emerging about the bad faith in which the army dealt with all the new political parties ever since the 25th revolution. While demonstrators have kept their demonstrations and their acts of civil disobedience entirely peaceful, Sissi’s policy is to continuously goad them into violent responses. Having begun to stage such violent acts in the name of the opposition, but having failed to convince the public that they are genuine, as in the case of the bombing that was announced before it happened, the stakes seem to be rising all the time. This headlong rush towards the total destruction of the country has added a new rumour mill about what the military will do next that makes it impossible to resume any kind of normal life.

[pullquote] It would seem that the mainstream media generally is buying the story spun by Egyptian state media and the satellite stations owned by the Egyptian oligarchs, whilst the blocking of pro-democracy TV coverage, and the regular arrest of reporters, goes on completely unreported and uncommented. (Such conditions of blatant media manipulation are fairly familiar to discerning Americans.)[/pullquote]

Lamis Hadidi, the Islamophobic talk show hostess of al-Misri al-Yawm on billionaire Mohamed al-Amin’s CBC Channel, once a spokeswoman for Mubarak’s 2005 re-election campaign, who since the days of Mubarak has been calling for the strengthening of the siege against Gaza, and has continued to do so ever since, is now calling for a major assault on Muslim populations in general. For this reason, few people are sending their children back to school for fear of thugs being sent to attack the schools, in order to once again to lay the blame at the door of the ‘Muslim Brotherhood’, and set the stage for yet more assaults.

The BBC in Cairo is also astonishingly joining the ‘reds under the beds’ campaign of the Egyptian media over the Muslim Brotherhood, with a broadcaster accusing the Nobel Prize winning Yemeni activist Tawakkol Kirman of being a member of the Muslim Brotherhood for supporting the recent demonstrations, and she, outraged at the accusations, defending the support as being the normal reaction of someone who wants democracy.

It would seem that the mainstream media generally is buying the story spun by Egyptian state media and the satellite stations owned by the Egyptian oligarchs, whilst the blocking of pro-democracy TV coverage, and the regular arrest of reporters, goes on completely unreported and uncommented. Those TV stations still covering the demonstrations (al-Hiwar, al-Quds, and al-Jazeera Mubashir) are reduced to airing footage uploaded from mobile phones, but although those stations are extremely busy and active in their phone-ins and discussions, from the perspective of the BBC, and even newspapers such as the Guardian and the Independent in London which are noted for their more open-minded approach, they might as well be on a different planet.

Does this mean that if the rumour mills are true and schools are going to be attacked, that once again the ‘Muslim Brotherhood’ are going to be automatically blamed by the Egyptian media, and local communities then be ravaged by the unrelenting Egyptian military, without even the slightest doubts gracing the lines of subsequent reports in the international media? 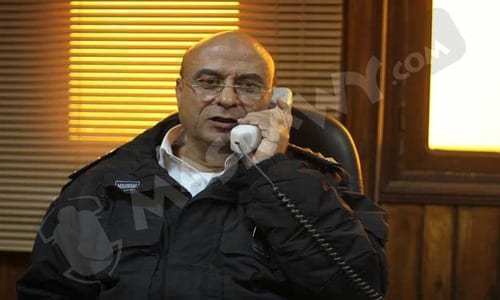 Egyptian activists are circulating a video that shows 11 officers and conscripts who were killed during their work in Kirdasa police station (see video above), allegedly by Muslim Brotherhood supporters.
An eyewitness police assistant said the Brotherhood raided and occupied the police station, and assaulted the officers present at the time, dragging and slaughtering them. They left Kirdasa station in rubble, according to the eyewitness.

Victims were taken to Al Agouza hospital on Wednesday night and Thursday morning.

A Facebook statement on the page “We are sorry, President” (launched in 2011 in support of ex-President Mubarak) published a photo of one of the officers, Brigadier Mohammed Gaber (pictured above) before and after his death in Kirdasa Station.

Egypt was gripped by violence yesterday as police brutally cleared the Rabaa and Nahda sit-ins, while Morsi supporters responded in kind.

The casualty figures are widely disputed. The Ministry of Health mentions at least 525 killed and 3717 wounded in the clashes that took place in the clear on Wednesday. The Muslim Brotherhood say that the death toll reached 2000, with many more injured.

Minister of Interior Mohammed Ibrahim announced in a press conference last night that 43 policemen were killed in clearing the Rabaa and Nahda sit-ins.

A month-long curfew has been imposed between 7:00pm and 6:00am in Cairo and 13 other governorates, as part of the general state of emergency.

Lamees El Sharqawy is a member of Hoqook News Network.  The Hoqook News Network is an Egyptian independent media organisation with a social aim, including a special focus on issues related to human rights, dialogue, democratisation and responsible media practices. It was established in 2010.