Home ABOMINATIONS The Democratic Enemies of Medicare for All

The Democratic Enemies of Medicare for All

Even before negotiations had started with the Republicans, Obama and his crew had already tossed aside single payer. Abject corruption? Cowardice? Take your pick. 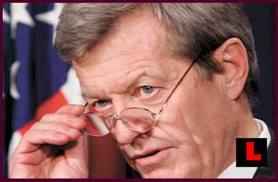 Democratic scum like Max Baucus gladly served as point man to stitch the Frankenstein Obamacare, while cheerfully drowning any possibility of single payer. This with the full support of the DLC and Obama, of course.

When Barack Obama decided to take ownership of a right-wing idea pushing market exchanges for private insurance, with mandates and subsides to make sure everyone bought the product, as a fix for our embarrassing health care system- it was clear we were in trouble. Now, as Obamacare is finally up and running, we see the most tech savvy Presidential Administration in history fail to build a functioning website. (Ironically, given the NSA revelations, when people actually want to give the government their personal information they seem incapable of taking it.) I remember heated conversations with liberals who assured me this was the best we could get, as conservatives would do anything to stop a plan that didn’t involve private insurance and marketplaces. Anything? Like shutdown the government even?

Quietly, while this mess was going on, some people continued to receive affordable treatment. Unlike Obamacare, this is actually a government program. Even the people who support Ted Cruz’s McCarthyite ramblings tend to support it. It is called Medicare. It is popular. It works. And it could truly bring down costs. Compare and contrast “Obamacare” with “Medicare for all.” One is convoluted and divisive, the other self-explanatory and familiar.

An honest critique of Obamacare is a critique of health insurance as a whole. A company that sells insurance, no matter what for, does it for one reason and one reason only- to make money. This makes our healthcare more expensive. We have a third party that needs to extract profit from the relationship between a doctor and his or her patient.

Having health insurance is also not the same as having access to healthcare. On top of the expensive monthly premiums, there are co-pays and deductibles that are huge barriers to getting treatments. We have in-network providers, out-of-network providers, and a book full of policies and percentages that gets changed every year. Obamacare further entrenches this mess into our lives.

Medicare for all would give us the collective power of buying in bulk. It would keep costs low, essentially using a strategy Walmart loves to exploit. If the government purchases the vast majority of the health care services and products across the country, that gives them huge leverage to bargain down costs.

While this is all well known, there is little political will to even bring the issue up. But the problem is not simply with the tea party. They are more concerned with attacking Barack Obama, for whatever reason, than providing any sort of comprehensive healthcare reform. The problem lies with the Democrats. Obama, the supposed great orator, certainly could have explained the need for Medicare’s expansion, at least as a starting point. The idea could have been taken up by any number of leading Democrats. There certainly would be pushback from the insurance industry, but this is inevitable for any reform to healthcare (it even was for Obamacare, which guarantees them customers).

The truth is the Democratic Party as a whole is ideologically against a national healthcare system. This seems obvious to anyone who has followed the issue somewhat closely, but many liberals have somehow convinced themselves that if only the nasty Republicans would be more reasonable we could finally get the healthcare the rest of the industrialized world enjoys. Until then, Obamacare is the best we will get so we should support it. That is nonsense. Those of us fighting for Medicare for all during the implementation of Obamacare need to both keep the conversation going and realize the Democrats are more adversary than ally.

The Language of Neoliberalism

The Shady Ties Between de Blasio and the Clintons