The Hypocrisies of Susan Rice

Print this post.
Human Rights for Some, Cruise Missiles for Others…
by JUSTIN DOOLITTLE 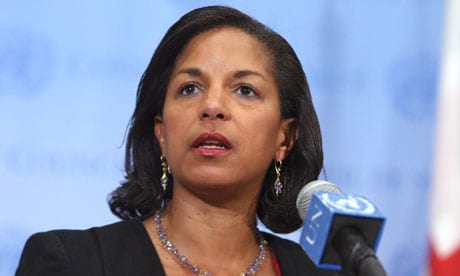 Rice: A corporate whore by any standard.

Back in August, New York Times journalist Mark Landler wrote a gushing profile of Susan Rice, exploring the national security adviser’s alleged “idealism” when it comes to foreign policy and her increasingly influential role in the Obama administration. Landler documented how Rice, an “outspoken defender of human rights,” had managed to rein in her fervent humanitarian impulses and accept the need for “pragmatism” – after all, the United States cannot save everyone, everywhere. Sadly, our beneficence is constrained by practical realities.

Now we find Landler once again writing about Ms. Rice’s new realist approach to the Middle East and how it has impacted the president’s policy priorities in the region. In a piece published over the weekend, for which Rice provided an interview, Landler doesn’t even attempt to conceal his admiration for the brilliant strategist:

For Ms. Rice, 48, who previously served as ambassador to the United Nations, it is an uncharacteristic imprint. A self-confident foreign policy thinker and expert on Africa, she is known as a fierce defender of human rights, advocating military intervention, when necessary. She was among those who persuaded Mr. Obama to back a NATO air campaign in Libya to avert a slaughter of the rebels by Col. Muammar el-Qaddafi.

First, this paragraph does not belong in the news section of the Times. Landler is clearly editorializing about a government official he likes and respects very much. This is not “reporting” as that term is defined by outlets like the New York Times.

Furthermore, consider the substance of this commentary about Rice, who, we are told, is “known as a fierce defender of human rights.” This raises some obvious questions. Where, exactly, is she “known” for her advocacy in this regard? Who are the people that purportedly view Rice as a champion of human rights? Not the people of Africa, one may assume, given that Rice, over the course of her career, has “shown an unsettling sympathy” for some of the continent’s most brutal tyrants.

In perhaps the most glaring example, Rice was able to suspend her “fierce” support for human rights long enough to strongly support Meles Zenawi of Ethiopia, a violent and repressive ruler who died in 2012. Rice called him ”brilliant” and considered him a “true friend,” although she admitted to having some differences of opinion with the great man, over such trivial issues as democracy and human rights. But why let petty stuff like that come between friends?

Rice’s “self-confident foreign policy thinking” has never included any discernible consideration of the plight of the Palestinians, perhaps the most oppressed people on Earth. Her views have never strayed even an inch from the standard line that all “serious” U.S. officials must take when it comes to Israel.

Even a cursory view of Susan Rice’s career shows that her idea of “fiercely defending human rights” is essentially indistinguishable from that of virtually every other official in Washington: victims of human rights abuses are accorded dramatically different degrees of sympathy depending on the abusers’ standing with the U.S. Government. Imprisoned, suffering Gazans might as well not exist. Ditto for political prisoners in Ethiopia, or victims of terrorism in Colombia, or the countless families who have had loved ones killed by U.S. military interventions over the past few decades (all of which Rice has supported).

Mark Landler and the New York Times may genuinely do not know about Rice’s flagrant hypocrisy, or they may simply be propagandizing for a particularly favored official. The latter is certainly more likely. Either way, calling a consistent advocate of military violence and repression a “fierce defender of human rights” is a clear – though unsurprising – failure of journalistic honesty. That label should only be applied to those who believe human rights are universal and are not dependent on the victims’ worthiness in the geopolitical perspective of the United States.

Justin Doolittle writes a political blog called Crimethink. He has an M.A. in public policy from Stony Brook University and a B.A. in political science from Coastal Carolina University.

A Plague on Both Parties!