The Retreat from Obligation 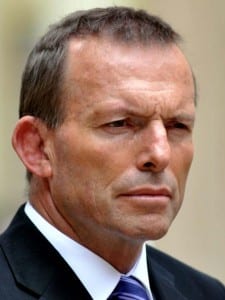 Tony Abbott: Australia’s new PM. A ruthless corporate henchman and political thug, like the rest. Time may come when the mere label of “corporate politician” should kill the career of any of these creatures. That time is long overdue. Wake up, people!

by BINOY KAMPMARK
The climate change saboteurs are mucking in with their bits of devastating advice. Australia, as it promised to do with its new conservative government, has taken the lead against carbon pricing as a mechanism of curbing pollution. Its newly elected Prime Minister, Tony Abbott, is a minted climate change denialist. Even as continents burn, and typhoons rage, expediency is too sacred a calf to sacrifice. In the Australian context, mining corporations touch the status of the divine.

“Canada applauds the decision by the prime minister Abbott to introduce legislation to repeal Australia’s carbon tax. The Australian prime minister’s decision will be noticed around the world and sends an important message.” The statement was certainly right on the second point.

The decision by the Abbott government to repeal the carbon tax on the country’s 300 biggest polluters has been considered an act of environmental lunacy. The mining lobby is chortling. In the case of Canada, it already started chortling in 2011, when Canada withdrew from the Kyoto protocol on climate change. Its report card on the subject of reductions is bleak, having failed to meet its own international emission targets. The culprit there has been mining in the Alberta tar sands.

Harper’s government is certainly pulling no punches about its polluting credentials. It is the bully in the ring, treating the science of climate change with a disdain similar to Abbot’s denialist posture. On Wednesday, it decided to describe the European Union’s decision to class carbon-heavy Alberta crude dirty fuel as “unscientific” (Guardian, Nov 14). It should know – this is a government with a rather lax approach to scientific protocols.

Even as Calandra’s statement of congratulation claimed that green house gas emissions were, in fact, being reduced under Harper’s wise management, Environment Canada was claiming the opposite. By current calculations, Canada’s emissions are projected at 734 mega tonnes, 122 mega tonnes higher than the target of 612 set by the international accord of 2009. The accord placed Canada in line with the US goal of reducing greenhouse gas emissions by 17 percent from 2005 levels by 2020. The current pace of reduction, however, will amount to a mere 3 percent drop.

Japan has similarly announced that it will modify its pledge to reduce its emission cuts from 25 percent to 3.8 percent by 2020. The Japanese case is complicated by the fact that 50 of the country’s working nuclear reactors remain offline after the March 2011 Fukushima nuclear plant disaster. Heavy reliance is placed on gas and coal-fired power. The wealthy, in short, are reneging and repudiating. The sleepwalkers of history are in the ascendancy.

The gulf between an accepted policy of approaching climate change by targeting carbon, and those against any pricing mechanism to deal has become a yawning one. The UN Framework Convention on Climate Change, or the Conference of the Parties (COP) 19 session in Warsaw has drawn it out starkly, and it is striking that Australia does not even have a delegate at the talks. Enraged, impassioned, and upset, Yeb Sano of the Philippines claimed at the Warsaw climate change conference that the devastation wrought by Typhoon Haiyan demanded his own sacrifice: a hunger strike. As thousands are feared dead, Sano claimed that he would fast for the duration of the conference till a “meaningful outcome is in sight.”

The Filipino advocate, in an impassioned speech, reminded delegates about the pressing problems of climate change. “We can fix this. We can stop this madness. Right now, right here.” While it is true that environmental catastrophes do provide invaluable propaganda fodder that sometimes excludes science at the behest of political motives, there is little doubt that the statement of change is unmistakable. Scientists continue to ponder the links between hurricane activity and anthropogenic links to climate change. Countries more sympathetic to commodities and hostile to renewable energy sources are grabbing any chance to deny any links.

But when the future of the planet is entrusted to an unqualified caretaking approach to miners, the plundering advocates who make stripping resources, rather than replacing them, a priority, we are in a sorry state indeed. When developing countries are being burdened with efforts to reduce emissions, while wealthy states increase their polluting credentials, the tables have been given their perverse turn.

This is not to suggest that efforts, some of time arguably more productive, are being undertaken outside the multilateral efforts of the UNFCCC. Bi-lateral agreements, notably those between China and the US, have been made to reduce emissions. But the UNFCCC remains the only forum of its type, despite lingering questions about long-term finance for developing economies and the wording of a draft treaty.

The fury of the developing world will not abate. According to Munjurul Hannan Khan, representing the 47 least affluent countries at COP 19, “They are behaving irrationally and unacceptably. The way they are talking to the most vulnerable countries is not acceptable.” Australia, Canada and Japan are doing their level best to claim otherwise.

Binoy Kampmark was a Commonwealth Scholar at Selwyn College, Cambridge.  He lectures at RMIT University, Melbourne.  He ran for the Australian Senate with Julian Assange for the WikiLeaks Party.  Email: bkampmark@gmail.com

The Terrifying Future Envisioned By Libertarians