Home AMERICAN STUDIES MAKE IT A LAW: Big Cats Are Not Pets

MAKE IT A LAW: Big Cats Are Not Pets

Ira Fischer is an attorney, now retired, who devotes his retirement to the cause of animal welfare through advocacy. His Web site is irafischer.com

• This article is annotated and commented (see Appendix)

The Big Cats and Public Safety Protection Act (S. 1381) was introduced into the U.S. Senate this past month by Senator Richard Blumenthal (D-CT). The Bill is aimed at prohibiting private ownership and breeding of exotic cats such as lions, tigers and other dangerous wildcats. 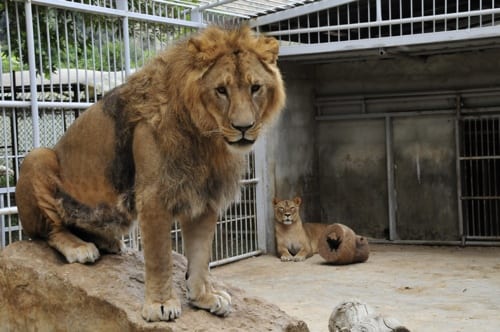 The Bill is in large measure a response to repeated tragedies between humans and captive big cats, such as the episode in Zanesville, Ohio two years ago when the owner of a menagerie of exotic animals released his “pets” from their cages, leaving first responders with little choice but to shoot and kill 49 lions, tigers, bears and other exotics to protect public safety.

Fortunately, no people were killed or injured in this incident. However, since 1990, numerous dangerous incidents involving big cats have occurred in the U.S., including 21 human deaths, 246 maulings and 143 wildcat deaths. These tragedies underscore that these apex predators are simply not suitable as pets.

These tragic events are not limited to the harboring big cats as pets by individuals. Traveling zoos, petting farms and other commercial entities that keep wildcats captive also demonstrate that tragedies inevitably occur when unqualified people possess these animals. Last year, the Humane Society of the United States released the results of an investigation into GW Exotic Animal Park, where multiple dangerous incidents, resulting from allowing patrons to interact with wild predators, were recorded.

Apart from the threat to public safety, the Big Cats and Public Safety Protection Act is also a response to the welfare issue of the wildcats that are held captive – the victim of their exotic beauty. It has been estimated that upwards of 10,000 big cats like lions, tigers and cougars are held captive in private hands in the U.S. These animals oftentimes suffer from severe physiological and psychological health defects due to their captivity.

These magnificent creatures are trapped in a cycle of misery that begins with captive breeding by dealers, who strip the infant cubs from their mothers. The all too common scenario is that the owners discard these wildcats when they become too big, aggressive, or expensive to keep, or when the novelty wears-off. The cycle often ends with these animals living in pseudo-sanctuaries, such as unaccredited petting farms, since overburdened accredited sanctuaries (Accredited sanctuaries, such as Big Cat Rescue, do not permit commercial trade, propagation or direct contact between the public and the wildlife) seldom have the financial means to provide lifetime care. Many are shipped off to hunting ranches to be shot for trophies, while others are killed for their remains (primarily fur, food or Asian medicine). Such is the fate of many privately owned exotic cats that in some ancient cultures were revered as though they were gods.

Currently, there is a myriad of state and local laws that govern the harboring of exotic cats, which makes it difficult to enforce public safety and to protect the welfare of these animals. Reason suggests that a comprehensive federal ban is needed to address this nationwide problem, which too often spells disaster for humans and almost always results in a lifetime of misery for the innocent victims of the bizarre American subculture that callously disregards the laws of nature for their own self-aggrandizement.

According to Senator Blumenthal, “The Big Cats and Public Safety Protection Act is a common-sense solution to a situation that has spiraled out of control. Thousands of dangerous big cats are kept in deplorable conditions as backyard pets and in roadside zoos across the nation. This bill would alleviate the threat these animals pose to the general public.”

The Bill would ensure that these endangered creatures do not threaten public safety or end up living in small cages, or chained, in someone’s backyard, basement or garage. Passage of this legislation would also help to prevent the undermining of wildlife conservation, resulting from private ownership of big cats, which contributes to illegal international wildlife trade.

The Bill, if penned into law, would close the sad chapter on the dual threats to public safety and the welfare of captive big cats that are victimized by being held captive as pets or commodities. The time is long past due to ensure public safety and to put an end to the suffering and abuse endured by these majestic animals and to respect their birthright to be wild and free.

I just read your article on the Greanville Post, and was dismayed by lack of awareness when you stated:

“The Bill is in large measure a response to repeated tragedies between humans and captive big cats, such as the episode in Zanesville, Ohio two years ago when the owner of a menagerie of exotic animals released his “pets” from their cages, leaving first responders with little choice but to shoot and kill 49 lions, tigers, bears and other exotics to protect public safety.”

Of course they had a choice, but given the view of animals in a judeo.christian nation, the first, easiest and often only option is always to kill the animals…. This is not the case in India, where a more humane view has influenced the public consciousness.

Please refer to the following article for to better understand the harm done by the judeo.christian concept of dominion, as laid down in genesis:

You may be aware that there has been a media brouhaha over the killing of a lion. While this is a hot topic the media generally sides with the forces of dominion. Until we stop pretending that Judaism, Christianity or Islam have the potential to inspire compassion, we will pass laws here and there which in general uphold the tenets of dominion and do little to help animals. The following was my response to the frenzied response to the killing of a lion by Melissa Bachman… It attempts to detail the role of religion as a major contributing factor to animal abuse.

‘Now therefore take, I pray thee, thy weapons, thy quiver and bow, and go out to the field and take me some venison.’

On learning to kill:
“I’m a small town girl from Paynesville, Minnesota, who has been hunting and fishing for nearly 18 years. Yes I’m only 25, but I started at an early age thanks to my parents who brought my brother and I out to the duck blind and whitetail woods. I’m sure it would have been easier to leave us home, but it’s their dedication that sparked my love for the outdoors” Melissa Bachman

“It is the essential characteristic of a wise person that he/she does not kill any living being. One should know that non-killing and equality of all living beings are the main principles of a [true moral] religion” Jain sutra

Obamacare is Doomed by Its Internal Logic

Dear Ruth … I am empathic with your noble view expressed in the Counterpoint to Big Cats Are Not Pets posted in The Greanville Post. I am deeply saddened that it does not prevail in our society. Hopefully, there will be a time when “mankind” will heed the call to stop disregarding the laws of nature and to respect the birthrights of the non-human animals that share our planet.

“The greatness of a nation and its moral progress can be judged by how its animals are treated.” Gandhi