Pope Francis and Change in the Roman Catholic Church 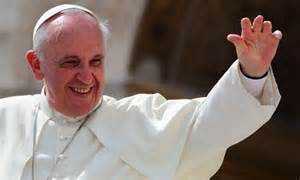 Pope Francis has been taking some pretty remarkable positions, for a Pope at any rate, during his first year in office.   Indeed, in the context of the Roman Catholic Church they could be considered radical.

For example, he has opened the door to gay Catholics, he has acknowledged that there is a sort of “gay lobby” within the Vatican itself, he has said that atheists might well be welcomed into heaven.  He has also been engaging in some fairly substantive house-cleaning and reorganizing, like bouncing more than one reactionary Cardinal from places of influence on policy making and politics within the Church hierarchy.  Finally, and most remarkably, he has ripped into contemporary capitalism, to the extent that Rush Limbaugh (not a Catholic) felt it necessary to engage him in an extensive bout of red-baiting.  Funnily enough, several recent Popes, even including Benedict XVI (no radical, for sure) have criticized modern capitalism, but this Pope has done it in a context of possibly making changes in Vatican policy, as, for example, towards Liberation Theology.   So what is going on here?  Is this just a Cardinal who happened to get elected Pope striking out on his own?  I don’t think so.

It must be assumed (although we have no way of knowing) that votes are not taken blindly in the College of Cardinals. We must assume that Cardinals do not vote for their candidate for the next Pope simply because they like him personally, or he comes from a Hemisphere that has never had a Pope before, or speaks Spanish as his first language. The Pope is one of the most powerful political figures in the world. Therefore it is only logical that those voting know of the several candidates’ politics (and of course their economics as well). If these suppositions are correct, that could very well mean that this Pope was chosen by a majority of the College to bring real reform to the Church (which happens to have undergone real reform a number of times in its history). If that is true, that would mean that Pope Francis has a powerful bloc within the Church behind him and will continue to push forward with his reform agenda.

Indeed, in order to deal with changing realities over time, the Church has changed policies numerous occasions over its long history, from the time of the Council of Nicaea in 325, which following the conversion to Christianity of the Roman Emperor Constantine, a) brought the Church fully out into the open, beyond persecution, and b) made it a political partner with the Roman Empire.  Over time came, for example: St. Augustine, who among other things codified the doctrine that the “Jews killed Christ,” so that anti-Semitism became a driving force for the Church and Church policy over so many centuries; St. Thomas Aquinas who, of course with colleagues, introduced an element of rationality into church doctrine; the Crusades, which made the Church into a major military power for a time; the focus on the use of torture on so-called heretics for centuries, starting well before the Reformation, which “anti-heretical” process then led to Church-sponsored massive civil wars in Europe for 150 years.

For many centuries the Church was a major geographic/political power in Europe, through the Holy Roman Empire, which came to an end only during the Napoleonic Wars.  It continued to be a major political player in Italy, down to the time of Unification in 1860, which deprived the Church of virtually all of the Italian landscape that it had once controlled.  In the 20th century, the Church openly sided with fascism, from Mussolini through Hitler and Franco to the Dirty War in Argentina (of which, unfortunately, this Pope knows much from the inside, some of it admirable, some of it not so — which experiences could, incidentally have played a very important part in the development of his thinking).

So indeed, the Church has played many political, military, and economic roles over time, to be sure almost invariably on the side of the varying ruling classes.  But, capitalism is reeling towards its predicted self-destruction, possibly taking our species and many others with it.  At the same time an increasing number of people, including numbers of Catholics, are seeing the Church as becoming increasingly irrelevant in terms of these challenges.   Following, then, its two-millennia tradition of changing for self-preservation, could the Church make a turn to the Left?  Could it side with some form of anti-capitalist-as-it-has-come-to-be social democracy in the future? Who knows? Remember, Francis is not the only recent Pope to criticize the system.

But what about religio-social policy?  Could any significant changes be coming there as well?  Let’s take abortion, the prime example in the social policy arena.  The modern position of the Church on abortion was established by Pope Pius IX in 1869. He reversed the long-time Church position, established from the time of St. Augustine and reinforced by St. Thomas Aquinas, that abortion was OK up to the time of “quickening” (16-20 weeks). It was Pius IX who also established the Doctrine of Papal Infallibility.

Since abortion-rights is the number one social issue on which so many people oppose the Roman Catholic Church while they might approve of it on so many others, it will be fascinating to watch what the Pope might do on this one.

If his support among the Cardinals is strong enough, he might actually make a totally remarkable move here, striking down the arbitrary position on abortion established by Pius IX by taking advantage of the other arbitrary position (Papal infallibility) established by the same Pope. For example, without going back to the pre-Pius IX doctrine, he could say something like: “For Catholics, life begins at the moment of conception; for Catholics it is sacred, and thus for Catholics it may not be interrupted in utero at any time.  However, it is not incumbent upon the Mother Church to attempt to legally enforce our doctrine on non-Catholics.  Thus from this time forward, the Church is to cease to attempt to enforce our position on others through the use of either the criminal or the civil law.”  A similar formulation could be developed to deal with the issue of gay marriage.  Oh boy, the reactionary Catholic leadership, especially in the United States would go absolutely nuts.  But just imagine how so many non-Catholics would react.

Some authorities for whom I have a great deal of respect have said that the Pope’s social and economic initiatives could simply be an attempt to take the heat off the child molestation scandals, the alleged gay-prostitutes-in-the-Vatican scandal, the Vatican bank financial/possible corruption scandal, and the other who-knows-what that occurred, especially under Benedict XVI. But would Francis really need to go to attacking the essence of capitalism, which is making profit to the exclusion of everything else, in order to do that? I do not want to jump the gun with a definite prediction. I am just talking about “possibles” in the historical context of an institution that has made many major changes in doctrine and organization over time since the Council of Nicaea in 325. The Catholic Church is the longest-lasting religious and political institution in the Western World.  It has not achieved this state-of-grace by standing still.

ABOUT THE AUTHOR
Steven Jonas, a physician by profession, and professor of preventive medicine, is a senior editor with The Greanville Post and columnist with several other leading political blogs, including Buzzflash/Truthout. One of the most astute political observers writing today, he has authored many books and countless essays on many topics, from politics to culture and history.  His latest book, a revision of his classic, The 15% Solution, How The Republican Right Took Control of the US-1981/2022, was reissued in late 2013 by Punto Press Publishing.

Why Berlin is active on behalf of the Russian oligarch Khodorkovsky

The Life Force of Jainism: When Kindness Takes on Revolutionary Dimensions