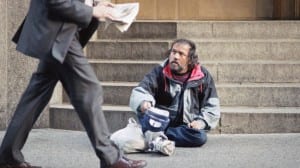 The gap between the rich and poor in America is growing wider and is now almost unbridgeable. We need to act to avoid the many negative consequences.

America is believed by the rest of the world to be the land of opportunity and unimpeded upward mobility. It is where people from all walks of life, backgrounds, races and color can make the best of their opportunities and talents. America attracted people from all over the world to achieve, discover, innovate and improve their lives, and this helped create the greatest society ever built by man.

It used to be that in America you could make a future for yourself no matter who your parents were, what your religion or race is. Can you imagine a black president with a Moslem father becoming the elected leader in France, England or Germany?

Unfortunately this is becoming less and less so. Life in America is slowly falling into a type of a new caste system, where your origins, and particularly your family’s fortunes can in large part determine your future. If you were born rich you are likely to remain that way. But, if you were born poor, you and your progeny are likely to remain that way as well. The opportunity to change your caste is becoming less available nowadays. We are slowly turning into a system similar to the landed gentry feudal system in England or to the more structured caste system in India. In a caste system, you are born in a pre-defined caste with no way out. In America the newly developing caste system appears to encompass more than just income inequality, it encompasses inequality in opportunity, in health, in life expectancy, in happiness and in all other aspects of life itself. Robert Reich related the Caste system to the decreasing social mobility in the United States.

Wealth inequality is dividing our one United States into two Americas: one that is rich and in control and one that is poor and helpless. The two Americas exist in increasingly separate spheres and barely know each other. The rich don’t use the same schools, don’t frequent the same restaurants, don’t attend the same social functions, don’t support similar causes, and don’t use the same modes of transportation or shop at the same stores. They live on a higher plane and have an easier and more enjoyable life, different in many ways from the more demanding and stressful lives of most Americans. The rich populate the Congress and other government hierarchies. They write the laws and establish the rules for the rest of us to follow while largely unfamiliar with our lives and the challenges we face. Now, the wealth gap in the United States is the forth highest in the world; only Russia, the Ukraine and Lebanon are worse.

The new American Caste System is self-perpetuating. The children of the rich grow up in better environments. They live, for the most part, in two-parent homes, get better nutrition, and receive better health care and better elementary education. They grow up healthier both physically and psychologically and are, in many ways, better suited for life in today’s society. In addition, the rich can afford to send their children to the better universities, which are now beyond the reach of most high school graduates. Children of the rich will form the bulk of our political and economic leadership. That reality reflects the common dictum: “he who has the gold makes the rules”.

The children of the poor, on the other hand, are usually born to single mothers and end up either uneducated or undereducated. Relatively few of them graduate from the better schools and universities; most end up in the lower echelons of society and repeat the lives of their parents’ steeped in poverty and hopelessness. The chasm between the two groups continues to grow and is now almost unbridgeable.

Many reasons underlie this developing new Caste System in America. The primary reason is the growing wealth inequality, which is being made worse by globalization. During the times of Henry Ford, for example, the rich intended to help the poor economically to stimulate the general economy (and consequently their own their profits). Henry Ford wanted to enable his employees to buy Ford cars. Nowadays, the workers live mainly in China or India or Bangladesh with little or no connection to the owners of the companies where they are enslaved. That underlies the reason why the rich these days appear to have even less empathy towards the poor; they don’t know them and have little, if any, interaction with them. The rich in America don’t want to expand social security, help the poor with health insurance or medical care, support unemployment compensation or increase the minimum wage. Present-day leaders of industry and commerce are more internationalists with no real allegiance to any particular country or to its citizens. They own multiple homes perhaps in New York, Paris or London and own factories in China, India or the Philippines. They couldn’t care less about the workers in those factories. All they care about is making more money for themselves and their heirs.

While the British caste system is based on heritage and the Indian caste system is based more on occupation, history and race, the new American Cast System, is based primarily on wealth. In the future, it will most likely to become more ingrained and be based on heritage as well. In India an untouchable, a member of the lowest caste in India, cannot do anything that raises himself or herself above his or her appointed station in life. The caste system is stamped on an individual as untouchable from birth. His social status is fixed, and his economic condition is permanently set.

Caste systems infuse a sense of inferiority into lower-castes. This traumatizes them and also inhibits the inter-caste discourse and thus prevents the sharing of knowledge. It destroys the ability to create and enjoy the fruits of freedom and degrades the feelings of unity, citizenship and patriotism. In time such a caste system in the United States will inhibit our overall economic viability, entrepreneurial activity, life expectancy, and institutionalize discrimination on basis of wealth. We must act to stop our moving in that direction.

Our politicians are aware of the seriously negative effects of wealth inequality on the health of the United States both economically and socially. In a recent speech, President Obama acknowledged that much. We are waiting to see if he, as always, is just great at giving speeches or is he going to follow-up with some actions. Judging by our past experiences, and in view of his major opposition in Congress, I must say that I am not very hopeful.
ABOUT THE AUTHOR
Retired Pharmacologist with two masters and a Ph.D.

How Google Became One of America’s Biggest Tax Dodgers