The Poor Are Dying to Make the Rich Richer 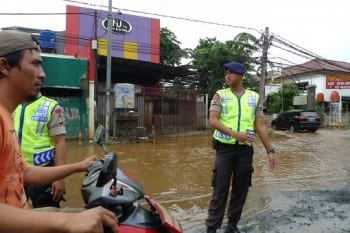 Trying to direct traffic in the flood.

And here we go again! It is January 2014, but somehow it all feels like last year, or the year before last… or ten years ago. Jakarta is under water; people are trying to save all they can, but their houses are being ruined… some men, women and children are dying… Tens of thousands are sick, suffering from typhoid, and diarrhea.

As I plunged into flooded areas, my friend, a medical expert from Yogyakarta, sent me a text message: “Please be careful in Jakarta… Leptospirosis, typhoid and other infectious diseases…”

Dozens had already died in the capital city alone, or at least this is what was reported in the local media. As always, we will never know the real numbers. As always, they are much higher.

This year they erected many more posko’s in Jakarta than in 2013. A posko is basically a post, often put together during natural disasters, in theory in order to provide help, to distribute water and food, or to give shelter. In the neighborhood of Kampung Melayu, there are dozens of posko’s: even the notoriously brutal Special Forces – Koppasus – are managing one, and the police have another just next to it. The Muslim NGO has one, too. Each post has a self-promoting logo. But inside, it is all empty; the police and soldiers playing games, eating or sleeping. Inside the shelter, there are only a few women and a couple of kids. Rubber boats are having a dry run; they are being inflated and deflated, while other rescue vessels are resting against the wall. Cranes, ambulances, boats; many of them are totally idle.

“This year’s floods are worse than those from the last year”, explains a police officer, called Nurasid. Inside the shelter, the daughter of a neighborhood chief says she had been here for six days already: “This time the water was two meters high, as I measured it inside our house. I have no idea why.” Good question, as this administration was actually elected mainly because it promised to ease the almost total traffic gridlock, and to prevent devastating floods in the capital.

A few minutes’ drive, and under a flyover, dozens of people are living in the open, surrounded by bundles of belongings, by their children, and even by several domestic animals. One of displaced people, Mr. Ilyas, recalls: “We went to ‘At Tahiriyah Mosque’, but they were overstretched. We couldn’t enter other mosques – they just refused to let us in. They said that if we entered, it would be considered najis and kotor, meaning unclean, filthy. We had no idea why they felt that way… There are two hundred of us now, under this bridge. There is a police kitchen nearby, but they are cooking for themselves, not for us.”

The river is running wild and the houses along its banks are clearly cut off from the rest of the world. The locals, those who are dry, are having a day out, together with their children, looking at those who are not as fortunate.

Boredom in Indonesian cities is legendary, and every misfortune or disaster draws large crowds. There is not even the slightest attempt to provide some relief, by the government or by the neighbors. Not now, not while I am there. It was the same last year… I know people get some help. But it is sporadic, uncoordinated, and insufficient.

The water rises and subsides. People die. Thousands lose their shelters, hundreds of thousands, sometimes millions, have their dwellings damaged. Arch capitalist Indonesia does close to nothing to help. The system despises everything that is public. Only profitable undertakings are taken seriously and implemented. Meaning: only those activities that can enrich individuals, who are already wealthy, are seriously considered.

As Jakarta is under water, the rest of Indonesia is living through many equally unnecessary horrors: the flood inundated at least twenty-two villages in Central Java, and landslides killed people in Malang, East Java. Nineteen people died from flooding and landslides in and around Manado, on the island of Sulawesi. Several years ago, the UN nominated Indonesia as “the most disaster prone nation on earth”.

It is true that the country sits on the so called ‘ring of fire’. It is true that it is periodically shaken by earthquakes, battered by tsunamis and even by ash flying from restless volcanoes. Some calamities cannot be predicted or prevented. But most of the lives lost are due to absolutely ‘unnatural disasters’ triggered by a totally unnatural element – bizarre market fundamentalism. Indonesia is run by thugs, by a heartless, cold-blooded clique of thieves, who have survived as species ever since the US-sponsored coup of 1965 in which most of leading Indonesian citizens were slaughtered, imprisoned or exiled.

The country is kept static by a violent blend of late feudalism/early capitalism, fundamentalist religiousness (definitely not only Islam, but also Christianity, even Hinduism), and disinformation/ awful level of education.

The infrastructure of the country is almost finished – collapsed. Corrupt priests, factory owners, business lobbies: all of them have no time for things they see as frivolous or even insane: like public works, the building of public transportation, better schools and hospitals, or simple things like tsunami prevention, a drainage system, waste management or the distribution of drinking water.

The country’s system is essentially based on maximizing profits, on looting all there still is under and above the earth, and then on throwing some meager and voluntary charity into the faces of the poor, that is the majority. As a member of the Academy of Science of Indonesia told me few years ago, Jakarta and all major Indonesian cities have the worst access to clean water than the cities of India and even Bangladesh. Waste management is seen as an unnecessary expenditure. And so the rivers and channels of all major cities are clogged by garbage.

The drainage system is inadequate and old, dating often to the Dutch era, when Jakarta, then Batavia, was a small city of few hundred thousands, not the monster of twelve million that it is now. There are hardly any green areas in the city, as developers ate almost all the parks. And in the mountains, soil erosion, excessive logging, mining and ‘development’ again, caused such environmental destruction that in the rainy season, water flows from higher ground in an unpredictable and uncontrollable way.

Of course nature fights back; it punishes those who break its patterns, destroying it. Unfortunately, in this country, those that are really responsible for this disastrous national project – Indonesia – are hiding behind high walls in comfortable and relatively safe neighborhoods. The poor, robbed of everything and unprotected, are battered by landslides, inundated and ruined. It is all very brutal and very simple.

“In Jakarta”, as a leading Indonesian businessman who presently lives abroad told me: “they will never build any decent public transportation system, because of the car lobby. And business cares nothing that all major cities are experiencing near-total gridlock and terrible pollution”. The same can be said about the construction industry. As I was explained to by Ms. Sofya, a victim of this year’s floods, who literally lost her house in North Jakarta: “Why should businesses care about state projects. Once they are finished, state projects do not return. If no drainage is built and floods keep coming back every year, hundreds of thousands of houses will keep getting destroyed … It is great, isn’t it? It is great for business. It means tremendous profits for those who repair and rebuild houses and buildings.”

Professor Muslim Muin from the prestigious Bandung Institute of Technology (ITB) has no doubts where the problem lies: “Don’t blame the ocean. The sea level this year is normal. The problem is that the rivers and channels in Jakarta, cannot not cope with the amount of water. Before the rainy season, the government should perform a hydrodynamic simulation, and then it would know what kinds of pumps are needed and what type of drainage system should be used.”

But the government doesn’t perform almost any such tests. And every year, the floods come as a ‘surprise’. And people lose their homes. And those in power make huge profits. And the religions somehow make sense of all this, so that the rich remain rich. And nothing changes. And so next year, the nation will be once again be ‘surprised’ by new occurrence of devastating floods.

Andre Vltchek is a novelist, filmmaker and investigative journalist. He has covered wars and conflicts in dozens of countries. His discussion with Noam Chomsky On Western Terrorism is now going to print. His critically acclaimed political novel Point of No Return is now re-edited and available. Oceania is his book on Western imperialism in the South Pacific. His provocative book about post-Suharto Indonesia and the market-fundamentalist model is called “Indonesia – The Archipelago of Fear”. He has just completed the feature documentary, “Rwanda Gambit” about Rwandan history and the plunder of DR Congo. After living for many years in Latin America and Oceania, Vltchek presently resides and works in East Asia and Africa. He can be reached through his website or his Twitter.

FOR THE WEST THERE IS NO PRICE TOO...

Jon Stewart and the Pentagon honor...

FOR THE WEST THERE IS NO...