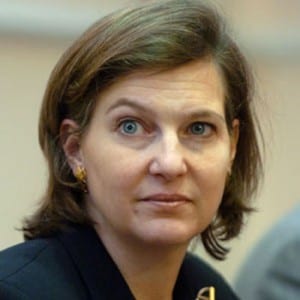 Imperial shill Nuland: caught with her corporate breeches down. Shameless.

The latest round of revelations about Victoria Nuland’s shameless interference in the affairs of Ukraine, and, as Putin has said, helping what is in effect a slo-mo coup against the current government, prove that the US, along with the EU, is deeply involved in the convulsions of that victimized nation. Rest assured the US and its accomplices, pious protestations aside, do not have the interests of the Ukrainian people at heart. It’s a sham.

As usual, the American media were quick to cover up the damage by making it seem like Nuland was only involved in helping people fight for their human rights, freedom and the rest of that old claptrap (when on the lips of US officials.)
The audacity of the US ruling class to proceed practically in the open is breathtaking, and it stems, once again, from the almost total brainwash they maintain on the American mind. Continually abetted US chauvinism and media disinformation are powerful barriers to Americans finally “getting it,” and that is a cross the rest of the world, and many Americans themselves have to bear.  How would we feel if Russian officials were caught openly maneuvering to help a separatist, pro-Russian mob dislodge California from the Union? And what do you think of those howls of mock indignation at the notion the Russkies actually listened in on Nuland’s phone and other communications? My, we’d never do that, would we?

CBS does its job: offensive to demonize Ukraine’s government continues