By Patrick O’Connor, wsws.org
For Marxists who understand the sociopathic, cynical nature of imperialism, this hardly comes as a revelation. Still, it’s good material to shove down the throats of liberals, right-wingers and everyone else who pretend to live in a morally exemplary nation.—Eds 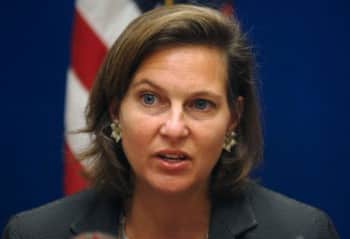 Nuland’s malarkey: “There should be no doubt about where the United States stands on this. We stand with the people of Ukraine who see their future in Europe and want to bring their country back to economic health and unity.”  Yada, yada, yada. Apparently a coup is not too high a price to pay.

A leaked phone conversation between Victoria Nuland, assistant secretary of state for European and Eurasian affairs, and Geoffrey Pyatt, the US ambassador to Ukraine, has exposed the anti-democratic and colonialist character of the Obama administration’s intervention in the former Soviet republic.

The discussion between the two officials includes a detailed review of which right-wing opposition figures Washington is working to install in office, and how it is using the United Nations to rubber-stamp the operation. While Germany and other European powers have worked closely with the Obama administration in promoting the violent protests against President Viktor Yanukovych, the leaked phone call reveals tensions between the imperialist powers. At one point Nuland tells Pyatt, “F–k the EU.”

The discussion, posted anonymously on YouTube (see above, also), underscores the thoroughly cynical character of Washington’s public diplomacy. The Obama administration’s rhetoric about “democracy” and the Ukrainian people’s right to determine their own future is a charade, concocted for public consumption. Behind the scenes, government officials speak frankly with one another about the real agenda—advancing Washington’s geo-strategic and economic interests in Eastern Europe by installing pro-US and anti-Russian puppet figures in the Ukrainian capital.

Referring to Klitschko, head of the UDAR (Strike) party, which has close financial ties with Germany’s ruling conservative party, Nuland tells the ambassador: “I don’t think Klitsch should go into the government. I don’t think it’s necessary, I don’t think it’s a good idea.” Pyatt agrees, saying, “let him stay out and do his political homework.”

Nuland continues: “Yats [Yatsenyuk] is the guy that who’s got the economic experience, the governing experience.” Pyatt later warns Nuland that “Klitschko has been the top dog” within the opposition, and that she will need to “move fast on all this stuff” and speak with the UDAR leader as part of their “personality management” of the opposition leadership.

The utter criminality of Washington’s drive to install a pliant regime in Kiev sharply emerges in Nuland and Pyatt’s discussion of Oleh Tyahnybok, the leader of the neo-fascist All-Ukrainian Union (Svoboda) party. Nuland describes Tyahnybok as one of the “big three” within the opposition leadership. The State Department operative goes on to tell Pyatt that “what [Yatsenyuk] needs [after he is installed in office] is Klitsch and Tyahnybok on the outside—he needs to be talking to them four times a week.”

These remarks confirm that there is no confusion whatsoever within the Obama administration that it is working in partnership with fascist movements in Ukraine.

Tyahnybok is the leader of the Svoboda party, which was initially called the Social-National Party of Ukraine and featured a neo-Nazi logo. In 2004, Tyahnybok praised right-wing Ukrainian partisans in World War II, who, he declared, “did not fear, but took up their automatic rifles, going into the woods to fight Muscovites, Germans, Jewry and other filth.”

He added that Ukraine still had to be liberated from a “Moscow-Jewish mafia.” In 2005, Tyahnybok signed an open letter to Ukrainian leaders demanding a halt to the “criminal activities” of “organised Jewry,” which, he declared, was attempting to commit “genocide” against the Ukrainian people.

This is one of the “big three” figures with whom the Obama administration is working to install a client regime in Ukraine. Yesterday, Nuland met with several opposition figures, among them Oleh Tyahnybok. No details of the discussion have been made public, but Ambassador Pyatt released via Twitter a photo of a smiling Nuland posing next to the pro-Nazi leader and his colleagues.

Yesterday’s meeting between Nuland and Tyahnybok was not the first. The two also held a closed-doors discussion when she was previously in Ukraine, last December. After that meeting, Nuland staged a photo opportunity in the Kiev central square that has served as the headquarters for the anti-government protests organised by the right-wing opposition, handing out bread to the demonstrators in a show of US support.

In her telephone conversation with Pyatt, Nuland praises UN Secretary General Ban Ki-moon for deploying a special envoy, Robert Serry, to Ukraine. This, she explains, will “be great, I think, to help glue this thing [i.e., a new government].” These remarks underscore the role played by the UN as an instrument of imperialism, working with the US and its allies to cover up or endorse their predatory operations around the world.

Immediately after praising the UN, Nuland declares, “F–k the EU,” in apparent frustration that the European powers were not doing more to back the regime-change operation. According to the Kyiv Post, another leaked phone conversation, in German, between EU official Helga Schmid and EU Ambassador to Ukraine Jan Tombinski includes a discussion between the two figures over how the US regards the EU as being “soft” on Ukraine.

In the Nuland-Pyatt discussion, the US ambassador expresses his agreement on the need for the UN to be involved, saying, “we’ve got to do something to make it stick together, because you can be pretty sure that if it does start to gain altitude that the Russians will be working behind the scenes to try to torpedo it.” He adds that “we want to try to get somebody with an international personality to come out here and help to midwife this thing.”

Washington is engaged in a ruthless struggle to undermine any obstacle posed by Moscow to its drive to dominate the geo-strategically crucial Eurasia region, the vast land mass stretching from Eastern Europe, extending over the oil-rich Middle East and Central Asia, and reaching to China’s western borders. US imperialism is promoting fascist movements in Ukraine and fuelling the flames of a nascent civil war as a means of advancing its interests and ratcheting up the pressure on the Russian government.

Nuland’s nomination as assistant secretary of state for European and Eurasian affairs in May last year clearly formed part of the Obama administration’s aggressive strategy. She previously served as a deputy national security adviser to Vice President Dick Cheney and is married to the prominent “neoconservative” commentator and historian Robert Kagan.

Yesterday, Sergei Glazyev, a senior aide to Russian President Vladimir Putin, claimed that the US was spending $20 million a week sponsoring Ukrainian opposition groups, including supplying them with arms.

Responding to questions about the leaked phone conversation, state department spokesperson Jen Psaki admitted that it was genuine and said that Nuland had apologised to EU figures, before absurdly declaring the incident marked “a new low in Russian tradecraft.”

Psaki said that while the Obama administration had no evidence that the Russian government was responsible for intercepting and leaking the phone conversation, “this is something they have been actively promoting, posting on, tweeting about, and certainly we feel that represents a new low.”

The Obama administration was revealed by National Security Agency whistleblower Edward Snowden to have erected a vast surveillance network to eavesdrop on the telephone and Internet communications of the world’s population, including heads of state and government. It is no position to lecture anybody about “new lows.” Its hypocritical protests nevertheless point to concerns that the leaked conversation could prove damaging to its ongoing campaign against Moscow and the Yanukovych government.

The writer is a senior political commentator on European affairs for wsws.org, information arm of the Social Equality Party.