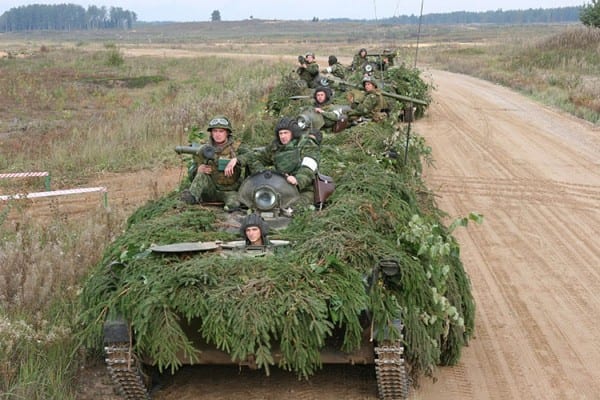 The Kremlin carried out large-scale military exercises along its border with Ukraine yesterday, amid rising tensions with the Western-backed Ukrainian regime that seized power in Saturday’s fascist-led putsch in Kiev.

Announcing the exercises, Russian Defense Minister Sergei Shoigu said: “In accordance with an order by the president of the Russian Federation, the forces of the western military district were put on alert at 2pm today.”

The military alert was billed as a “surprise comprehensive interoperability test” of armed forces in Russia’s western and central military districts and its air force command. Some 150,000 soldiers, 90 warplanes, 120 attack helicopters, 880 tanks, and 90 ships reportedly participated.

Though Shoigu claimed the mobilization was “largely unrelated” to events in Kiev, he pointedly noted that the exercises took place “on the border with several countries, including Ukraine.” The alert was widely reported as the first public reaction to the Ukrainian crisis by Russian President Vladimir Putin, who until now was at the Sochi Olympics and did not comment on it.

Shoigu added that Moscow was “carefully watching” the situation in the Crimean Peninsula, a Russian-majority region of Ukraine that includes a major Russian naval base at Sevastopol.

Thousands protested for and against the new Ukrainian regime in the Crimean regional capital of Simferopol yesterday. One person was killed and many wounded amid clashes between Russian opponents of the Kiev regime, many of them Cossacks, and ethnic Tatars supporting the Western-backed regime. Russian protesters demanded the organization of a referendum on secession from Ukraine, which was bitterly opposed by Tatar protesters.

These clashes highlight how the reckless support given to right-wing and fascist opposition groups in Kiev by Washington and the European Union (EU) have driven Ukraine to the brink of a civil war, threatening to escalate into a direct clash between Russia and NATO.

Tensions have exploded since the Saturday putsch toppled Russian-backed Ukrainian President Viktor Yanukovych. The Kiev regime declared Russian to no longer be an official language in Ukraine, while officials in the Crimea and several southern and eastern provinces of Ukraine have said they do not recognize the new regime’s authority.

Conflicts are escalating in particular over Crimea. On Tuesday, the Western-backed interim president in Kiev, Oleksander Turchynov, called an emergency meeting to discuss “not allowing any signs of separatism and threats to Ukraine’s territorial integrity [meaning the events which have taken place in Crimea] and punishing people guilty of this.”

Far-right groups backing the new regime in Kiev threatened to send so-called “trains of friendship,” which are in fact gangs of armed thugs, to take Sevastopol. Officials there are setting up checkpoints and self-defense militias to guard against an assault on the city. In one indication of the reactionary character of the pro-Russian forces, Sevastopol mayor Aleksey Chaly hailed members of the hated Berkut riot police, dissolved by the Kiev authorities, and invited them to come to Sevastopol to defend the city.

Anonymous Russian security officials told the Financial Times yesterday that, while they did not aim to break up Ukraine, they would feel “compelled” to militarily support the Crimean Peninsula if it decided to secede from the rest of Ukraine.

Western officials, who have reportedly exchanged tense phone calls with Russian military authorities in recent days, signaled their opposition. Calling Ukraine a “close” partner, NATO General Secretary Anders Fogh Rasmussen said he “assumed that all states respect the sovereignty, independence, and territorial integrity of Ukraine, and we have made this clear to all whom it may concern.”

US Secretary of State John Kerry issued a thinly veiled threat Thursday night, warning in an interview on NBC News not only against any use of military force by Moscow, but also that imperialism is preparing the same fate for the Putin regime as the one that befell the government of Viktor Yanukovych in Ukraine.

“The rapidity with which it has moved [the coup in Ukraine] should be a message to Russia,” Kerry said. “Russia needs to be very careful in the judgments that it makes going forward here…”

These events highlight not only the utter criminality and recklessness of imperialist policy, but also the disastrous political and geo-strategic impact of the Stalinist bureaucracy’s dissolution of the USSR. The restoration of capitalism in the USSR produced obscene levels of social inequality—Ukraine’s top 50 oligarchs have a net worth of $112.7 billion, or two-thirds of Ukraine’s Gross Domestic Product—and left all the ex-Soviet republics torn by regional and ethnic antagonisms.

The social base of the existing regimes is so narrow that all these countries are vulnerable to subversion by imperialist powers working with determined fascist groups. Under conditions in which the imperialist powers are pursuing a ruthless campaign to isolate and dismember Russia, the ethnic and regional tensions fuelled by these power grabs directly raise the threat of war.

The positions of the pro-Russian factions—aiming to ally themselves with Moscow to preserve their positions through a conflict that could trigger a world war with NATO—is bankrupt and reactionary. The only way forward is the struggle for the independent mobilization of the working class against imperialism, its fascist helpmates, and the corrupt regimes created by the restoration of capitalism in the USSR.

The response of the population is the main worry for the fascist-backed regime in Kiev, which announced its cabinet yesterday. It knows full well that its mandate from the imperialist powers is to repay Ukraine’s debts to the major banks and protect Ukrainian oligarchs’ wealth by imposing despised austerity measures upon the population, including deep cuts to state energy subsidies.

Therefore, in a bizarre ceremony, it presented the line-up of ministers to its only popular base: the few thousand far-right protesters on Kiev’s Independence Square. It asked them to shout their approval for the various ministers as they were presented on the square.

Arseniy Yatsenyuk, whom US officials had identified as their preferred leader prior to the putsch because of his close ties to oligarch Yulya Tymoshenko, was selected as prime minister. (See also: US response to leaked call confirms US/EU regime-change plot in Ukraine)

He declared, “We are to take extremely unpopular steps, as the previous government and previous president were so corrupted that the country is in a desperate financial plight. We are on the brink of disaster and this is the government of political suiciders! So welcome to hell.”

Such remarks underscore that the putsch in Kiev had nothing to do with democracy, as is cynically claimed in Western media outlets; it is a naked bid to implement a dictatorship to defend the financial and strategic interests of Western imperialism.

The other ministers introduced included Andriy Parubiy, was named secretary of the security and defense council. The coordinator of security for protesters on Independence Square in Kiev, he is a political associate of Oleh Tyahnybok—the head of the fascist, violently anti-Semitic Svoboda party—with whom he founded the far-right Social-Nationalist Party in the 1990s, shortly after the collapse of the USSR.

The geopolitical dimensions of the coup in Ukraine