Home ABOMINATIONS The National Endowment for Democracy in Venezuela

The National Endowment for Democracy in Venezuela

Print this post.
The Stealthy Destabilizer
by KIM SCIPES 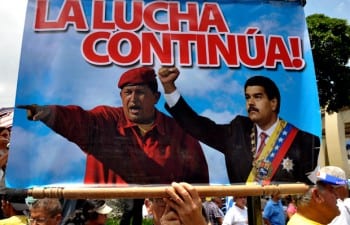 As protests have been taking place in Venezuela the last couple of weeks, it is always good to check on the National Endowment for Democracy (NED), the US Empire’s “stealth” destabilizer.  What has the NED been up to in Venezuela?

Before going into details, it is important to note what NED is and is not.  First of all, it has NOTHING to do with the democracy we are taught in civics classes, concerning one person-one vote, with everyone affected having a say in the decision, etc.  (This is commonly known as “popular” or grassroots democracy.)  The NED opposes this kind of democracy.

The question remains: Why do governments from Venezuela to Russia tolerate these malicious meddlers? Don’t they know what they’re up to?

The NED promotes top-down, elite, constrained  (or “polyarchal”) democracy.  This is the democracy where the elites get to decide the candidates or questions suitable to go before the people—and always limiting the choices to what the elites are comfortable with.  Then, once the elites have made their decision, THEN the people are presented with the “choice” that the elites approve.   And then NED prattles on with its nonsense about how it is “promoting democracy around the world.”

This is one of the most cynical uses of democracy there is.  It’s notable even in what my friend Dave Lippmann calls “Washington Deceit.”

The other thing to note about NED is that it is NOT independent as it claims, ad nauseum.  It was created by the US Congress, signed into US law by President Ronald Reagan (that staunch defender of democracy), and it operates from funds provided annually by the US Government.

However, its Board of Directors is drawn from among the elites in the US Government’s foreign policy making realm.  Past Board members have included Henry Kissinger, Madeleine Albright, Zbigniew Brzezinski, Frank Carlucci, General Wesley K. Clark, and Paul Wolfowitz.  Today’s board can be found athttp://www.ned.org/about/board; most notable is Elliot Abrams of Reagan Administration fame.

In reality, NED is part of the US Empire’s tools, and “independent” only in the sense that no elected presidential administration can directly alter its composition or activities, even if it wanted to.  It’s initial project director, Professor Allen Weinstein of Georgetown University, admitted in the Washington Post of September 22, 1991, that “a lot of what we do today was done covertly 25 years ago by the CIA.”

In other words, according to Professor William Robinson in his 1996 book, Promoting Polyarchy, NED is a product of US Government foreign policy shift from “earlier strategies to contain social and political mobilization through a focus on control of the state and governmental apparatus” to a process of “democracy promotion,” whereby “the United States and local elites thoroughly penetrate civil society, and from therein, assure control over popular mobilization and mass movements.”  What this means, as I note in my 2010 book, AFL-CIO’s Secret War against Developing Country Workers: Solidarity or Sabotage?, “is that instead of waiting for a client government to be threatened by its people and then responding, US foreign policy shifted to intervening in the civil society of a country ‘of interest’ (as defined by US foreign policy goals) before popular mobilization could become significant, and by supporting certain groups and certain politicians, then channel any potential mobilization in the direction desired by the US Government.”

Obviously, this also means that these “civil society” organizations can be used offensively as well, against any government the US opposes.  NED funding, for example, was used in all of the “color revolutions” in Eastern Europe and, I expect, currently in the Ukraine as well as elsewhere.

As I documented in my book, ACILS had been indirectly involved in the 2002 coup attempt in Venezuela by participating in meetings with leaders later involved in the coup beforehand, and then denying afterwards the involvement of the leaders of the right-wing labor organization (CTV) in the coup, leaders of an organization long affiliated with the AFL-CIO.  We also know NED overall had been active in Venezuela since 1997.

Additionally, however, as found on the NED “Latin American and Caribbean” regional page, NED has granted $465,000 to ACILS to advance NED objectives of “freedom of association” in the region, with another $380,000 to take place in Venezuela and Colombia.  This is in addition to another $645,000 to the International Republican Institute, and $750,000 to the National Democratic Institute for International Affairs.

The irony of these pious claims for “freedom of association,” etc., is that Venezuela is has developed public participation to one of the highest levels in the world, and has one of the most free media in the world.  Even with massive private TV media involvement in the 2002 coup, the government did not take away their right to broadcast afterward.

In other words, NED and its institutes are not active in Venezuela to help promote democracy, as they claim, but in fact, to act against popular democracy in an effort to restore the rule of the elite, top-down democracy.  They want to take popular democracy away from those nasty Chavistas, and show who is boss in the US Empire.  This author bets they fail.

Kim Scipes, Ph.D., is an Associate Professor of Sociology at Purdue University North Central in Westville, IN, and is author of AFL-CIO’s Secret War against Developing Country Workers:  Solidarity or Sabotage?, and KMU:  Building Genuine Trade Unionism in the Philippines, 1980-1994.  He can be reached through his web site athttp://faculty.pnc.edu/kscipes.

Poison pill: CBS informs us about the situation in Venezuela, not

The Crisis In Ukraine