Ukraine and the Great Asian Enclosure

Print this post.
Russia Crosses an Important Rubicon in the Crimea
by ALEXANDER REID ROSS 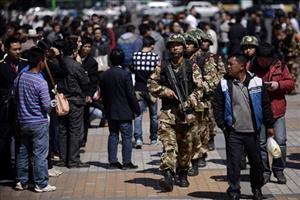 Armed paramilitary policemen patrol near the Kunming Railway Station in Kunming, in western China’s Yunnan province Sunday, March 2, 2014. More than 10 assailants slashed scores of people with knives..The attackers were Uighurs, a separatist ethnia from Xinjiang that has received assistance from the US National Endowment for Democracy (NED), an outfit which also helped the Maidan in Ukraine. Registered as an NGO, NED is an underhanded tool to advance US interests and create turmoil in any country that tolerates its activities.

The Cornerstones of Eurasia

When Pravy Sektor’s Dmitry Yarosh called on the Chechen liberation fighters to join Ukrainian nationalists in global struggle, he accented the North Atlantic’s energy politics better than anyone before him. Although Pravy Sektor blamed hackers for the call to arms, we ought to take the connection between the Caucasus and the Crimea extremely seriously.

The US and UK support Chechen moves for independence based on the vision of a “liberated region of the Caspian Sea,” which would turn over its vast energy resources to “the global marketplace.”

This vision has been thwarted by Putin’s devastating grip on Chechnya, as well as Moscow’s involvement on behalf of Abkhazia and South Ossetia during the Russia-Georgia War of 2008. The outcome of the Kremlin’s maneuvers has secured Russia’s energy corridor from Central Asia into Europe through Ukraine. Hence, Pravy Sektor’s manifesto for cross-cutting resistance in infrastructural cornerstones appears to connect North Atlantic’s interests while also exposing the general strategy of provoking separatism in order to overthrow competing circles of influence.

It seems surprising, then, that Yarosh left out the rebels in that other Western infrastructural cornerstone—Syria—in his sabre rattling. Syria under Assad seeks to become a “four seas” hub, uniting the Caspian, Black Sea, Persian Gulf, and Mediterranean. Currently, Russia dominates the Caspian Sea, and holds the weight of power in the Black Sea after grabbing the Crimea. With Assad’s Syria in place, the Kremlin has a strong foothold in the Mediterranean as well.

As in Chechnya and Ukraine, the US and allies such as Turkey support militants in Syria for a variety of reasons—not least of all, to pry hegemony from China and Russia. In the case of Syria, a gas pipeline from Iran through Iraq stands to generate capital and sovereignty for those powers that the US seeks to oppress. It also connects the Persian Gulf to Russia’s encircling network. Critical within this network is also the nearly-concluded Iran-Pakistan gas pipeline, which could be linked up to the Russia-China Central Asian pipeline labyrinth that spans more than 6,500-miles.

While China and Russia are lassoing in the Asian steppes one pipeline at a time, the US has its own pipeline in mind—one that runs from Turkmenistan into India via Afghanistan and Pakistan (the TAPI), and provides a possible counterbalance to the Iran-Pakistan pipe. To secure its TAPI, the US famously entered into deals with the Taliban in 1998, and the Taliban are again being called upon through what RusEnergy analyst Mikhail Krutikhin calls an “informal tripartite union” with Pakistan and China to keep the pipeline safe. Business as usual.

While the Taliban is called upon for “protection” of TAPI in South Afghanistan and Central Pakistan, Baloch insurgents have been reportedly commissioned by the CIA to run down the Taliban in southern Pakistan. Meanwhile, the US army has attempted to mediate between the different factions of the Baloch liberation movement, against the interests of Pakistan. According to Sharat Sabharwal, India’s former High Commissioner to Pakistan, the Quetta Shura and Haqqani network have been regarded as assets by Pakistan’s military, as “they have political links and have been used by the security establishment to settle scores with Baloch nationalists.” However, the settling of scores does not rule out collusion. Leading Balochistan separatist groups like the Jundullah are also part of the Taliban, so Pakistan’s sheltering of the latter has only fed the former.

US influence in the region boils down to a deeper purpose of US-Saudi hegemony: use the militants to protect the TAPI in Southern Afghanistan and Central Pakistan, but keep the Pakistan-Iran pipeline in the danger zone. Only a week ago, a pipeline from the southern field of Quadirpur exploded, killing two security guards. The explosion was likely the result of an attack by militants, as was another attack a month before, which destroyed part of a pipeline in the Southwest. Suspicions of Sunni Baloch separatists in the service of US-Saudi hegemony are intensified by a smattering of recent revenge attacks on the border of Iran in response to, among other things, reports of massacres carried out by Iran’s overseas elite squad, the Quds Force, in Syria on the side of Assad.

The idea for an independent Balochistan has high-powered public support in the US vis-à-vis a faux-camarilla surrounding Congressman Dana Rohrabacher, who declared last year, “It is time Washington stopped aiding Pakistan and developed a closer friendship with India and, perhaps, Baluchistan.” Rohrabacher’s less public allies include retired Lieutenant-Colonel Ralph Peters, who hopes for the dissolution of Pakistan in tandem with Baluchistan’s self-determination. Peters’s ambitiously redrawn map of West Asia, which includes a Sunni Iraq partitioned from a new “Arab Shia State,” along with a vastly reduced Pakistan, has been used in a training program for senior military officers at the NATO Defense College and likely the National War Academy.

What is most at stake in Balochistan is not only the gas pipeline network, but the strategic deep sea Port of Gwadar, which the US and Saudis have sought in vain to keep from Chinese hegemony. At the end of last month, China approved $1.8 billion to nine projects destined to develop road, rail, and fiber links between China and Pakistan via an “oil city” in Gwadar including a refurbished oil refinery. Pakistani authorities have followed up by insisting on the need to develop a strong naval base.

China has another $10 billion it is looking to spend on projects in Pakistan, including an oil pipeline running crude from Dubai through Gwadar, and sweeping north up the Karakorum Highway, the highest paved international road and the shortest distance from Pakistan to Western China. The pipeline would likely complete its journey in Xinjiang—the symbolic starting point of China’s “march west.”

Xinjiang is the site of massive development projects currently underway to bring “prosperity” into the mountains and deserts once dominated by Uighurs. The US Congress, of course, was only five years ago found to be giving $200,000 per year via the National Endowment for Democracy to the World Uigher Congress, which has been blamed for intense rioting and uprisings that have marked the Uigher separatist movement in Xinjiang. (Incidentally, the Uigher separatist movement made an inglorious reappearance in the form of a rampaging knife attack at a train station just days ago.) Xinjiang is also a critical stopping point for the Kazakhstan-China oil pipeline running from the Caspian, which would complete the circle of pipelines.

Within this great ring lies a huge amount of investment that China is making in Afghanistan, Turkmenistan, Tajikistan, and Kyrgyzstan. Kyrgyzstan’s Bukhara-Tashkent-Bishkek-Almaty pipeline, operated by KyrKazGas (a joint venture of KazTransGas and Gazprom-owned Kyrgyzgas), will be connected to China, and a new pipeline from Turkemistan to China through Tajikistan will be built in the ongoing development of the China-Central Asia gas pipeline.

Last month, China also set into operation an oil refinery in Kara-Balta, Kyrgyzstan, run by Zhogda. Billed as taking Kyrgyzstan off of Siberian oil dependence, the refinery ran into problems from the early stages of construction. While Kyrgyz Prime Minister, Jantoro Saptybaldiyev, encouraged a hasty construction, the refinery fell behind schedule, and the site began to rack up violations. Meanwhile, China began to construct a new refinery in Tokmak connected via Soviet-era railway to Chinese-owned oil fields in Kazakhstan.

With Central Asia’s oil-by-rail already in its nascence, a new pipeline is in the planning stages. Upstream, downstream, and infrastructural control means Xi Jinping is becoming a new oil baron in Central Asia. But protests against the Kara-Balta refinery within Kyrgyzstan have also occurred on a regular basis. Residents insist that the refinery is too close to rivers and residential areas, and that it pollutes the air. Indeed, the state environmental agency’s test showed local petroleum levels in soil 175-times the limit. Many also fear the intrusion of Chinese influence. For now, the Kara-Balta refinery is suspended.

Enormous enclosures do not come without a price. The growing global tumult is a symptom of the global land grab—the expropriation of land and resources by competing international powers to suit the needs of a rapidly expanding global consumer culture. As China and Russia broaden the belt around Asia, the impotence of the US’s strategy of aiding fascists, Islamists, and separatists in attempts to “liberate” natural resources and infrastructure becomes apparent. This is why Russia crossed an important Rubicon in the Crimea: not only have they proved that they aren’t bluffing in Syria, but they have exposed proxy wars by engaging in open conflict, thus heightening the visibility of the interconnected and ongoing game of global domination.

Alexander Reid Ross is a contributing moderator of the Earth First! Newswire. He is the editor of Grabbing Back: Essays Against the Global Land Grab (AK Press 2014) and a contributor to Life During Wartime (AK Press 2013). This article is also being published at earthfirstjournal.org/newswire.