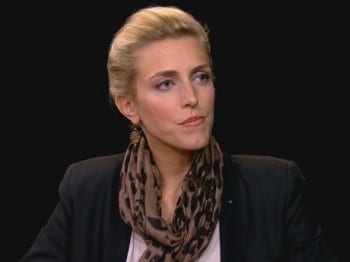 Ward: Putain extraordinaire working for the Empire. The plutocracy knows how to pick them.

LONDON—In the shameless  propaganda machine—a veritable Orwellian Ministry of Truth—that passes for “news organizations” in the US and much of the world, disinformers like Clarissa Ward, billed disingenuously as CBS Foreign Correspondent, stand out for their scandalously biased “reporting” and sanctimonious brand of warmongering on Syria and other flash points, the latest being the Ukraine.

For all intents and purposes this woman should be regarded primarily as a Pentagon disinformation operative trumpeting the goodness of the American empire and the “necessity” for it to intervene around the world as a human rights imperative.

The omissions and distortions in this report make it a textbook example of disinformation to the gullible. Riddled with clichés, the supposedly spontaneous dialog of the interviews shows a clear script, calculated to inject all the major “talking points” favorable to the side being supported, openly and stealthily by the US and its acolytes in crime, the corrupt EU regimes and their Frankenstein puppet, NATO.  For one thing, Ward—like the rest of the Western press corps, fails to see or find a single fascist among the noble rebels, despite the fact that they are prominent, boastful and ubiquitous (Sbovoda, “Right Sector”, etc.). And while busily painting Russia and those who oppose the current putsch in the worst possible colors, she also conveniently forgets to mention that the very foreign minister of Estonia in a recent leaked conversation with a high official of the EU confirmed that the deaths in Independence Square had been caused chiefly by snipers working for the Maidan, yea, the noble and oh, so peaceful rebels, a typical case of a cynical false flag event engineered by who else, the ubiquitous Western intel operatives. While the American media turn their eyes and ears away from such important and explosive truths, the world continues to carom toward oblivion. Expect no truth from these people, they’re all a bunch of whores, or, as Paul Craig Roberts likes to call them, “presstitutes” in the service of a corrupt clique pursuing dreams of global conquest and unlimited profit.

Toxic information is a threat to world peace

While Ward may be more talented or brash in climbing the suckup ladder to “journalistic fame”, the real tragedy is that this woman, who’s clearly too smart not to realize what she’s doing, is almost the norm.  Many others play the same game all over the media establishment. As a gun for hire, her output, encouraged by her handlers first at FoxNews and now at CBS, constitutes an eloquent exhibit for the urgent necessity to dismantle or neutralize the current global machinery of disinformation brandished by the hypocritical West, or else neither humanity nor this poor planet stand much of a chance of survival.

The commenters are senior editors with The Greanville Post.

I just read articles on the Ukraine crisis in two of Germany’s major newspapers, Der Tagesspiegel and Berliner Zeitung. Both list news facts concerning the crisis in the Ukraine and Crimea but nothing even comparable to the blatant mendacious even scandalous propaganda in the excerpt from Clarissa Ward’s service on the 60 Minutes “show”. While listening to her report delivered in a cool matter of fact tone as if it was a given that her words reflected a responsible journalistic account of real events, I felt first scorn, then sadness for the great majority of Americans deprived of trustworthy information about what is really happening in the rest of the world. First of all I counted her several mentions of the “Ukrainian Revolution” which colored her entire report. For there has been no revolution in the Ukraine. It can be most closely defined as an American orchestrated Putsch, a coup d’état, at the very most an American instigated extreme rightwing insurrection against a legally elected government, another of the color revolutions throughout the world. But Revolution? A “Ukrainian” revolution? After the original demonstrators from the West Ukraine favoring EU membership were replaced by Fascist Svoboda and the Nazi Right Sector, the uprising aimed at a pure golpe. Ward spoke of Russian interference. Interference from Russia? What intereference? Russia played no role in fascist attacks on the legal President of the Ukraine. While America’s politicians like Kerry and Nutland backed up by President Obama raged, Russian leader Putin retired into a week’s silence and Pentagon officials Ncontinued to study his “body language” (as reported by the Berliner Zeitung) to guess at what his reactions to western pressure would be. Nor did the then Ukrainian government “attack” demonstrators. Instead, as European media reported, Fascist snipers shot down demonstrators and in a typical case of false flag strategy of tension blamed the legal and now deposed government. “Self defense”, Ward labeled the role of the hidden terrorists-snipers killing their own people. Poor uninformed listeners to 60 Minutes! As she continued in her cool statements to an uninformed and most gullible American public, Ward’s depiction of events resembled reports on the Occupy New York movement. And, Oh God, she then pulled out of her hat dedicated Ukrainian oligarchs who not only made contributions to the “uprising” but were on the barricades each day, while even the European press has reported confessions from the recipients of daily pay from US supported sources. One should make no mistake about America’s role and objective in the Ukrainian crisis: America wants to place its missiles all around Russia’s borders and reduce that nation to minor disorganized peoples. Considering the packs of lies from a major US media foreign correspondent you have to wonder how Americans are to be informed about the realities of world affairs. Yes, sites like this one can scream the truth but too few Americans will hear that truth. Sadly, Americans seem destined to remain in the darkness of their historic Exceptionalism, forever outside the world community of nations seeking ways to live together on our planet.

I think it is interesting that Ward does address the fact that the oligarchs “supported” the “revolution,” and in that interview with Petro Poroshenko (who she makes clear is a “good capitalist,” and not one who profited by the selling off off Ukraine’s privatization of state industries), she does not also discuss the “agreement” that Yanukovic refused to sign. That document was the “EU-
Ukraine Deep and Comprehensive Free Trade Area.” It would do folks well to read the synopsis of that agreement. It goes a long way toward explaining why the oligarchs (including Poroshenko who is also a member of the Ukrainian parliament) who put big bucks behind overthrowing their government. It also helps explain part of the US interest in overthrowing the government of Ukraine.

Also neatly left out of this “report” is the extensive role of the US in this “peoples” uprising. Likewise is the fact that Nuland and Pyatt in the public outing of the US role in this revolt clearly indicate that Klitschko (featured in this report) is “too inexperienced” to head the new government. So Ward asks Klitschko if he will fight Putin. She wisely does not ask if he will fight the US (who had pulled him into the pre-regime change meetings).

It is very interesting that Poroshenko who was one of the top picks for the presidency is miraculously now leading in the polls to do just that. How neatly Ward and 60 Minutes painted him as a rich patriot giving his all for “democracy” in his country.

I do hate it when they ACT like they are giving an “objective” report when they are only playing bit actors in the larger cover story of yet another “peoples revolution” against a “bad” head of government. However, that is what well crafted propaganda does – sanitizes the lies and makes them seem to be “fact.”﻿