Home AMERICAN EXCEPTIONALISM No Jobs, No Economy, No Prospects For Peace Or Life —

No Jobs, No Economy, No Prospects For Peace Or Life — 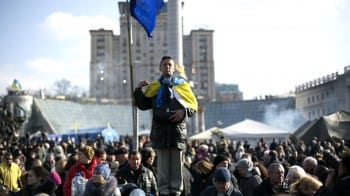 The grotesque lies about the Ukraine only match the lies being told about the actual condition of American society and its vaunted democracy.

Over the decades various administrations, seeking to improve their economic record, monkeyed with economic statistics to the point that the statistics are no longer meaningful.  According to Friday’s (March 7) payroll jobs report, the US economy created 175,000 new jobs in February. If you believe that, I have a bridge in Brooklyn that I’ll let you have at a good price.

Even if 175,000 jobs were created in February–remember now, February was a cold month whose low temperatures are used to explain poor housing and retail sales performance, yet somehow created 40,000 more jobs than needed to keep up with population growth–that is an insufficient amount to drop the unemployment rate.

To see how screwed up US economic statistics are, consider the reported unemployment rate (U.3) of 6.7 percent in comparison with the fact that there are about 6 million Americans who have been unable to find a job and are no longer counted as unemployed. These millions of unemployed are not included in the reported rate of unemployment.

John Williams (shadowstats.com) reports that the true rate of US unemployment is around 23 percent.

Rather than examine the issue, the presstitute financial media trumpets the government’s propaganda. In America there is no more of a financial media, except for Pam Martens and Nomi Prins, than a print and TV media.

Just as “your” government and “your” prostitute media lie to you about Ukraine, Putin, Saddam Hussein, Gaddafi, Iran, Pakistan, Yemen, Palestine, NSA, spying, torture, 9/11, Obamacare, and literally everything under the sun, “your” government lies to you about the economy and hides from you the perilous state of your economic existence. If you are not among the One Percent, you have no future in America.

Let us have a look at the 175,000 claimed jobs. Are these the promised high-paying jobs of the “New Economy” that Washington and its economists pimps guaranteed us would take the place of the offshored manufacturing and tradable professional service jobs?

Afraid not. In the many years that I have been observing the monthly payroll jobs reports and the BLS’s future jobs projections, I have never seen even one of the “New Economy” jobs. They simply do not exist. Yet, the economics profession, an extremely deluded collection of morons, still believes in these jobs.

Again–how many times have I reported this same result–here are the jobs of the “New Economy”:

Are these service jobs the promised high-pay “New Economy” jobs? No, but judge for yourself. 14,800 are jobs in wholesale trade. Food and beverage stores accounted for 12,000 new jobs. The Federal Reserve accounted for 7,800 jobs in order to continue rigging every financial market, thus replacing capitalism with Federal Reserve Central Planning. Accounting and bookkeeping services (it is tax time) gave the economy a short-lived 15,700 jobs. There were 24,400 temporary help jobs. The old standby, education and health services, delivered 33,000 jobs. Leisure and hospitality produced 25,000 jobs of which 21,200 are waitresses and bartenders who live on tips.

This has been the jobs profile of the “world’s only superpower” for the entirely of the 21st century. Washington, wallowing in its arrogance and hubris, is unconcerned with its economic base. Washington believes its own propaganda about the (non-existent) recovery and America’s economic power.

Consequently, the ignorant and stupid American government is now challenging Russia with a strategic intervention in Russia’s back yard.

Keep in mind that the “superpower” was unable to occupy Iraq after 8 years and has been defeated in Afghanistan after 12 years of blowing up women and children, weddings, funerals, health centers, aide workers, farmers and their homes and villages, kid’s soccer games. These deaths are the products of the “superpower’s” infallible high technology which only targets and kills “terrorists,” by which Washington means everyone who resists American hegemony plus all sorts of collateral damage such as kids’ soccer games and weddings and funerals.

Now this same, totally incompetent, “superpower” thinks it is going to take over Ukraine and put US missile bases on Russia’s southern border.

If the utter fools behind this “policy of insanity” actually go forward with it, life on the planet is about to cease to exist.

No greater threat to life on earth exists than the utter fools in Washington.
The American sheeple who belong in the streets more than the people in any other country are content to suck their thumbs while “their” government destroys not merely their economic future but also the prospect for life for themselves and their progeny.

•••
Paul Craig Roberts was Assistant Secretary of the Treasury for Economic Policy and associate editor of the Wall Street Journal. He was columnist for Business Week, Scripps Howard News Service, and Creators Syndicate. He has had many university appointments. His internet columns have attracted a worldwide following. His latest book,The Failure of Laissez Faire Capitalism and Economic Dissolution of the West is now available.
RevisShielded: 2
All comments subject to anti-hacking filters.
0
FacebookTwitterPinterestRedditEmail
previous post