Print this post.
By MBD March 9, 2014
POLITICALBLINDSPOT
Happily (and pathetically) strolling with precisely the man who put them in harm’s way, under false pretenses.
What does the picture below tells us about the mental state of men in uniform? That the jingoist brainwash is often most acute among those who bear the brunt of carrying out the criminal agenda of the empire and, occasionally, get hurt—pretty bad. Walking cheerfully alongside an unindicted war criminal —which George W Bush definitely is—is nothing to boast about. 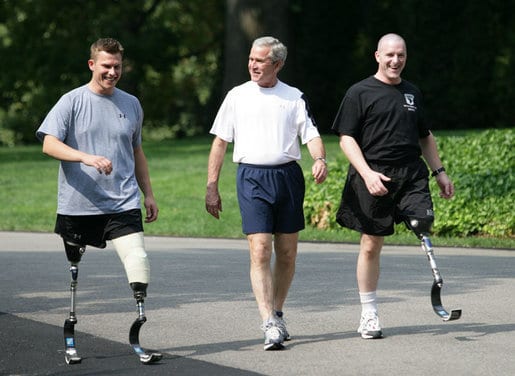 We often hear about death tolls when discussing the human cost of the wars in Iraq and Afghanistan. But the real cost can be contemplated in in a different way now, thanks to the Congressional Research Service (CRS).

The CRS report, focusing only American casualties, does not begin to sketch the horrendous cost to the victimized populations, the recipients of our military might, a cost that is truthfully put in the millions.

A newly-released report from the CRS provides a human accounting of the many serious injuries which thousands of U.S. soldiers returned home with.

Even more veterans suffer from “severe or penetrating brain injuries”, a total of 7,224 in all.  The report further says that 23,319 men and women have been diagnosed with what have been termed “moderate” brain injuries.

Nearly 288,000 total brain injury cases have been reported, in all, amongst all of the deployed and non-deployed military members.

When it comes to post-traumatic stress disorder, the Department of Veterans Affairs says that 118,829 continue to suffer from such mental health issues.

All of this is on top of the 4,476 American deaths noted by the report.

No Jobs, No Economy, No Prospects For Peace Or Life —