Every five years, hundreds of thousands of animals are sacrificed to Gadhi Mai. It is a cruelty without parallel. 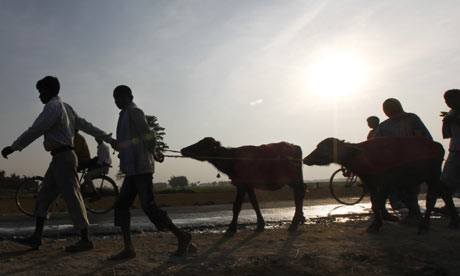 BY JAGDISH ARYA, The Nation Weekly (Nepal)
[Original report filed on 12/19/2004. Since then the situation has only gotten worse.)

[dropcap]E[/dropcap]very five years, thousands of animals are sacrificed to appease the Goddess Gadhi Mai, the site of the single worst carnage in the country. Despite this injunction, deviant cults indulge in it, as the festival of Gadhimai attests.  The sacrifice is meant to placate Gadhimai a Hindu Goddess of power.  While Gadhimai is the name of one of the Hindu deities,[1] the term usually refers to the world’s biggest animal sacrifice ”festival” conducted at the Gadhimai temple area in central Terai of Nepal.

Animals are sacrificed as part of this Hindu fair, with the hope that the sacrifice will lead to the fulfillment of wishes by the goddess.[2] It is estimated that more than 250,000 animals were killed during the period of sacrifice in 2009[3] while 5 million people visited Gadhimai during the monthlong festival.[4] This centuries-old tradition is observed every five years in Gadhimai premises located in the village of Bariyapur of Bara District of Nepal near the border with India. Male domestic Asian water buffaloes (Bubalus bubalis)(locally called “PaaDa”) are the preferred species to offer to the goddess. Several other species including male goats (Boka), chickens (Murgha), Pigeons (Parewa), Ducks (Batakh) and some rats (Moos), are also killed.)

What leads to the massacre is a very murky turn of events. The goddess gives the indication of her hunger for blood when a lamp ignites on its own at an anointed site at Gadhi Mai in Kalaiya. The whole thing takes place outside the public view, under a piece of cloth. Once the priests show that the lamp is lit, it is deemed as an indication from the goddess that she is demanding sacrifices or that she has signaled that the sacrifices can begin. A series of rituals takes place, ultimately leading to the bloodbath in which hundreds of thousands of animals are hacked to death.

The first ritual is the worshipping of weapons, which are later used to sacrifice the animals. Then the priests chant different hymns to appease the goddess. Once the pre-sacrificial rituals end, the animals are brought in for the kill. The sacrifice starts with the offering of five different creatures— the Pancha Bali. This includes: pigs, buffalos, goats, roosters and rats. The first on the list is the goat, followed by thousands of pigeons. Then come the pigs. This goes on until a rat is brought to complete the Pancha Bali. Remarkably, the pig’s blood is not sprinkled on Goddess’s idol as the animal is considered unholy.

[dropcap]A[/dropcap]s the ritual of the sacrifice of five groups of animals approaches its end, more than 600 people carrying naked swords and axes wrapped in red clothes descend from all sides. They frantically rush towards the fenced field where thousands of buffaloes are kept. Many of them wear red headbands, indicating they are licensed killers.

This fair is infamous for the sheer number of deaths and the cruelty on display—all in the name of appeasing Goddess Gadhi Mai. The fair reaches its climax on the day of the mass animal sacrifice.

The last Gadhi Mai Mela in 1999 saw 18,000 buffaloes sacrificed. Interestingly, the Gadhi Mai Mela Committee keeps the record of buffaloes that are brought for sacrifice because the devotees pay to get their animals beheaded. This year, the committee expects this number to cross the 25,000-mark. It, however, does not keep records of other animals or birds because of the overwhelming numbers. They include goats, chickens, ducks and pigeons, besides buffaloes.

To facilitate these killings sacrifice zone with a three-km radius around the Gadhi Mai Temple has been set up. After entering the sacrificial zone one can chop off the animal anywhere one pleases.

(MAIN ARTICLE CONTINUES BELOW THE VIEWPOINT)

The horrors described in this article once again illustrate the wages of speciesism—the idea that humans can do what they please with animals just by dint of being human, hence “superior”— around the world. The ritualized murder of these poor creatures by a frenzied, backward mob, fueled by the idea of hope and religious zeal, issue from a complex set of terrible historical factors that should have been eliminated or changed long ago, but which the forces that seek to maintain a rotten status quo that only benefits a puny minority keep in place at any cost, to human, nature, or beast. While judging this peculiar custom in Nepal, we should not feel too self-righteous about our own record, since while these people delight in hacking to pieces hundreds of thousands of beasts as a result of their ignorant and misguided beliefs, we in the so-called “developed” world sacrifice silently, out of sight, billions of animals every year for no other reason than business and inculcated habit. The results are very similar, as far as the animals are concerned. The periodical explosion of violence at Gadhi Mai is nauseating indeed, yet, vile as it is, it pales by comparison to the institutionalized killing of animals in factory farms around the world.

The main culprits behind these abject events can be identified. We can sketch them out as follows:

• The pervasive hold that speciesism still has over human culture, a sense of unique entitlement and “apartness” from the rest of the animal world which invites the idea of supremacy, an arrogant notion which in turn is literally sanctified by most religions under the ideology of dominionism (a form of fascism toward nonhuman animals).
• An utterly corrupt world leadership, representing puny elites, that has little or no interest in protecting animals or nature, and which spends immense social and military resources in keeping a chaotic, backward, poverty-riddled order in place;
• A pathetic level of social and cultural backwardness resulting from the above;
• The dead weight of unexamined, ignorant traditions;
• A scandalous amount of precious media time squandered on escapist nonsense, political lies, and retrogressive material. It’s clear that at least a portion of this time could be spent educating the global public about these horrors and the ways in which they could be eliminated.
• The animal defense community’s gross ineptitude in terms of organizing a parallel mass media system capable of informing the public without having to depend on commercial venues.  The internet has providentially helped, but we still need radio, television and print media power.
• The silence of institutions and individuals that should be speaking loudly about these crimes, starting with organized religion itself. Since most religious leaders assume their trade involves the right to “guide” society ethically, their glaring absence from this and other struggles is all the more telling about their true worth as factors for human progress. —PATRICE GREANVILLE

This, however, doesn’t apply to buffaloes. They are kept separate in a very large, fenced field and they have to be registered and paid for before the kill. No one is allowed to take away the heads of their animal; that portion of the kill is meant for Gadhi Mai. Obviously, all creatures, small and big, which are brought for sacrifice, go through pain and suffer- ing but buffaloes suffer the most. The killers can’t chop off the buffaloes’ heads because of their size. So, to make their task easier, the hackers first cut the buffaloes’ hind legs after which the animal falls on the ground. They then start hacking on the neck until the buffalo’s head is separated from its body. It takes 20 to 25 attempts in case of big buffaloes.

The bloodletting that takes place turns the entire area into a marshy land of blood; the chopped animal heads littred everywhere present a repulsive sight. The most appalling treatment is meted out on the animals that are brought for the Pancha Bali; their throats are slit. The slitting is done slowly and deliberately.
…

Legend has it that longer the duration, the happier the goddess. That’s not all. Three to four days after the sacrifice, people start fleeing the mela venue as it starts emitting a nauseating smell. All kinds of traffic avoid the fare. But it’s the people living in adjoining localities who suffer most. Many fall sick. It takes up to two weeks for the smell to go away.

Clearly, the scale of the killings at Gadhi Mai is increasing. Who is going to stand by these mute animals and speak for those who cannot speak for themselves?

(Arya is an environmentalist campaigning against cruelty against animals )

JAGDISH ARYA is a Nepalese animal defense activist.
Patrice Greanville, a lifelong activist for social justice and animal liberation, is founding editor of The Greanville Post.

FINAL IMAGE: An eloquent statement about the unspeakable ugliness of ignorant acts of violence against the most helpless, and an indictment of the sheer banal stupidity of humanity. 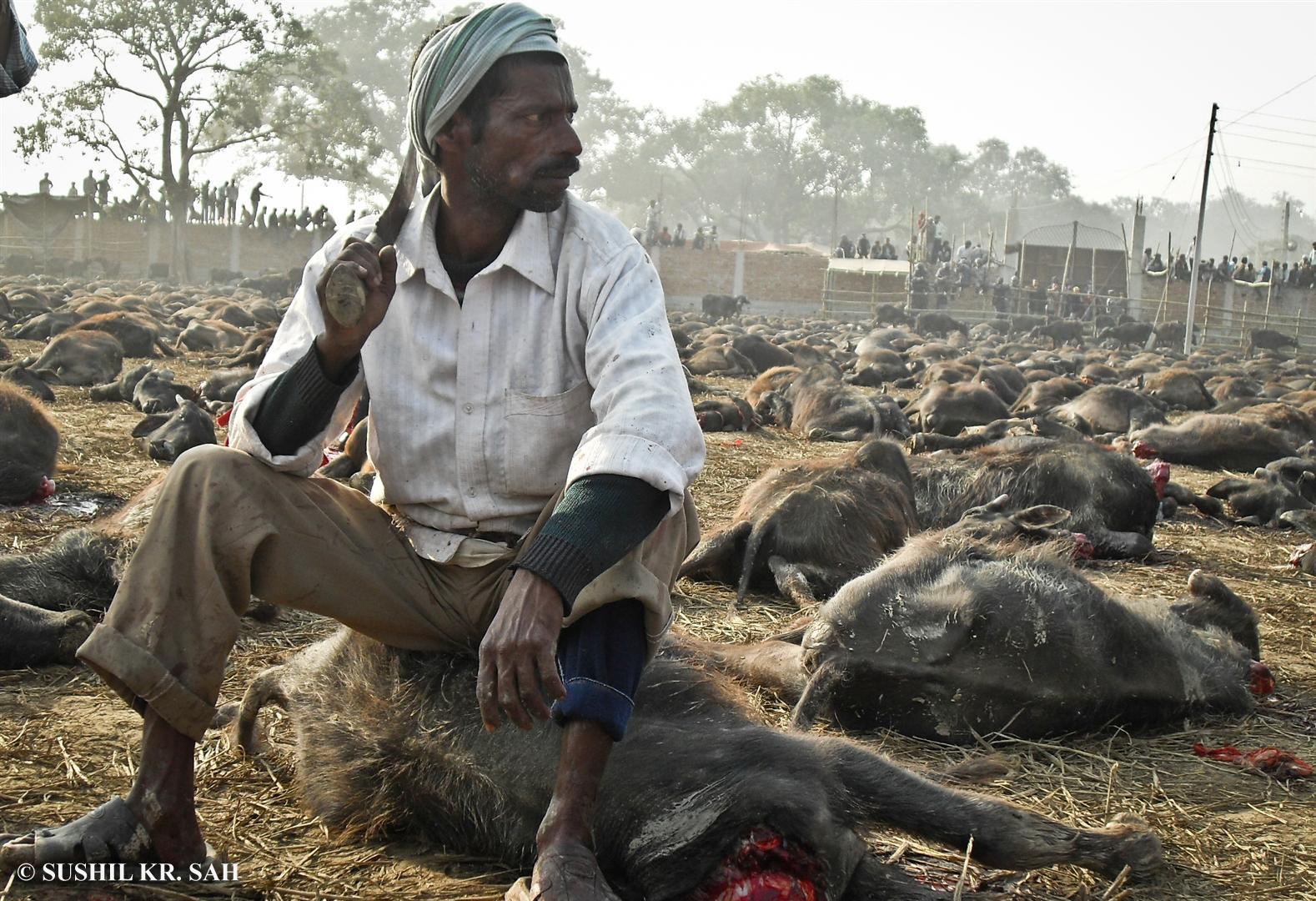 On hunting and the hunting of elephants—an introductory dossier (RESEND)

U.S.-and-allied governments are unimaginably corrupt. Can their ‘enemies’...