Ukraine? Russia? Keep Your Eyes on the Prize 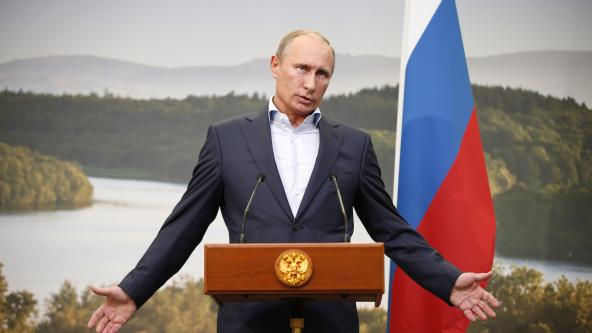 It is always the economic ruling class that controls the state apparatus, the government, in one way or another.  This is unless the government has become so violent that it can maintain itself in place by the use of force, massed and personal, against even the most highly placed, in both the ruling class and the military, as was the case in capitalist Nazi Germany…”

In a previous column on this subject, I reviewed briefly the history (that is the full picture, not just the half that is presented in the US media) of what has been going on in Ukraine and the Russian response to it.  I considered what in my view is the main strategic reason for that response, the determination of Russia to maintain control of its principal warm water port, at Sevastopol, Crimea.  All the rest from the Russian point of view, in my view, is commentary.  (The previous column is well-referenced, and additional references appear in a subsequent version of it published elsewhere.  For further references, see also two excellent columns on the subject by my friend, colleague, and editor at BuzzFlash, Mark Karlin.)

As is now well-known, President Obama has gone all-in on this one, with very strong accusations against Russia, and President Putin in particular, of all kinds of violations of international law and human rights and a drive for “expansion” (ho, ho, ho — with what, against whom?).  This takes place in the context of, over the past few months in the U.S/. Media, a ramping up of a personal demonization of Mr. Putin, in part trying to make his actions into matters of personal psychology and pique.

Obama has issued some economic sanctions, fairly limited so far, and has invited the EU countries to come all-in with him in issuing much stronger ones.  Currently the feeling in the media is that they will not go too far along the lines of what Obama is asking for.  This is because, as is well-known, the economies of many members are tied, to a greater or lesser extent, to the importation of energy supplies and the export of manufactured products, like luxury automobiles for the oligarchs and their dependents (Germany in particular) to Russia.  He is also, for show, sending some extra fighter jets and the like in military hardware to neighboring countries of Russia.

Now President Putin has said that he has no plans to invade any other NATO members, and he would be highly foolish to do so.  NATO was designed specifically as an anti-Soviet military alliance as the US was ramping up the Cold War in 1949, once the Soviet Union “got the bomb.”  Since the demise of the Soviet Union, it has been an anti-Russia alliance.  It provides that an attack on any member is to be considered an attack on all.  Interestingly enough, the agreement made between the Western Powers and the last Soviet Government just before its demise (as well as with the successor counter-revolutionary government of Boris Yeltsin), that the latter would withdraw its 300,000 troops from East Germany, thus permitting the merger of the East and West Germany, was contingent upon the pledge from NATO not to expand to Soviet borders.  That agreement has been violated by the West to the extent that virtually every country bordering on now Russia is member of NATO, except for Ukraine.

In my view now, the coup that toppled the elected (although totally incompetent and corrupt) previous Ukrainian Government, putting in place a pro-Western government with openly fascist elements in it, had little to with either the EU or NATO, as it is commonly thought to be.  Nor do I now think, as I did in my earlier column referenced below, given Obama’s speeches and more importantly his actions, that he has been an innocent bystander in all of this, being pushed along by middle-level State Neo-cons and National Endowment for Democracy officials, being forced to catch up.  I now rather think that the whole thing has been a set-up for Putin, led by the White House.  A trap was set for him and, at the cost of the Sevastopol base and to a lesser extent his popularity inside Russia, he could not avoid stepping right into it.

Based on his actions and the incredible hypocrisy of this speeches, it cannot now be doubted that Obama is not only with the unreconstructed Neo-cons, he is moving to position himself to be their leader, McCain et al to the contrary notwithstanding.  Now that the U.S.-specific sanctioning has begun, against what or rather who is the process aimed?  So far, individuals, certain members of the Russian “Oligarchy” and certain closely associated “Oligarchy” member institutions.

The conventional wisdom is that Putin controls the Oligarchy that collectively embodies the top-end of the economic Russian ruling class.  Well, that can be the case only if Russia is completely different from any other country on Earth.  It is always the economic ruling class that controls the state apparatus, the government, in one way or another.  This is unless the government has become so violent that it can maintain itself in place by the use of force, massed and personal, against even the most highly placed, in both the ruling class and the military, as was the case in capitalist Nazi Germany.

The prize here is not Ukraine, and it is not getting NATO even further around European Russia.  (What?  80% or so isn’t enough?)  No.  The prize is Russia, for Global Capitalism.  Russia has enormous energy reserves, many of them unexplored.  (It just so happens that, for example, Exxon is already there.)  Russia has an enormous potential market for consumer goods, and an enormous potential supply of cheap labor for Western manufacturers.  Russia is not a socialist state (although it is likely that most US don’t know the difference between Russia and the Soviet Union, which was at least nominally socialist.)  Russia is a capitalist country, run by a group of 19th-century-type Robber Baron capitalists.  Aided by the West’s hand-picked Boris Yeltsin, they were in positions to steal the means of production from the nation as a whole when the Soviet Union broke up.

Putin presently keeps certain of the Oligarchs in check.  But Putin, who has dreams of restoring “Russian Glory,” seemingly part-Czarist, part-Soviet, is an inconvenient impediment to the expansion of Global Capitalism into Russia itself.  Do you think that the Oligarchs, just like our capitalist top-guns, really care who is in charge, just as long as they get their way and make their profits?  And suppose a system came in that promises them an even larger share of the pie, without the present total unpredictability of a national leader who every once in a while on a whim throws one of them in prison?

There is a deal to be made here, especially if certain individual oligarchs and their enterprises can be made to feel the pain, now.  There is also a pro-Western Chief Executive waiting in the wings to follow along the lines briefly outlined above, once Putin is disposed of (in one way or another).  And that would be the former President and present Prime Minister, Dmitry Medvedev (who would then become the Boris Yeltsin of the incorporation of Russia into Global Capitalism).  Obama is going to continue to ramp up that kind of pressure, which he can do without asking the EU to do much else.

The prize is not Ukraine in the EU and NATO.  The prize is the Russian economy, fully integrated into Global Capitalism.  And next for the voracious appetite of that institution, if it can get there before it destroys the world with uncontrolled global warming, is of course, China.  Stay tuned.

About the Author
Senior Editor Steven Jonas, MD, MPH is a Professor of Preventive Medicine at Stony Brook University (NY) and author/co-author/editor/co-editor of over 30 books. In addition to being a columnist for The Greanville Post, he also serves in the same capacity at BuzzFlash/Truthout (http://www.buzzflash.com,http://www.truth-out.org/), and he is the Managing Editor of and a Contributing Author to TPJmagazine.net.

In his academic career Dr. Jonas has received numerous honors and awards. Among other things, he is a Fellow of the New York Academy of Sciences (elected), the American College of Preventive Medicine, the American Public Health Association, the New York Academy of Medicine, and the Royal Society of Medicine (UK) .  He is a Past President of the Association of Teachers of Preventive Medicine, and a past member of the New York State Board for Medicine.  He is Editor-in-Chief of theAmerican Medical Athletic Association Journal.

The GM ignition scandal and the case for public ownership

Of course, the end game is Russia, and not just Russia but China and India too on that side of the globe. BRICs and their repeated threat of moving off the petrodollar terrifies them. I agree entirely with your analysis of the strategy. (Although Brazil is part, I think our oligarchs’ SA strategy has a separate plan unfolding)

My one quibble might be the repetition of the demonizing propaganda of “… Putin, who has dreams of restoring “Russian Glory,” seemingly part-Czarist, part-Soviet,” just doesn’t pass muster when one speaks to Russian peoples or even the Russians in the Ukraine. He was very reluctant to so do, as you noted Steven, and knew it was a trap.

His expansionist dreams, and delusions of grandeur- much like Mark Twains death – are greatly exaggerated.

It hasn’t made him less popular in Russia… the Russians are proud he defended their relatives.

I think people grossly under-estimate the amount of loathing the Russians (and Poles) have for Nazis. As I quipped on FB yesterday:

“Sometimes I think people do not understand Russia’s paranoia like they understand and forgive Israels. WW2 saw 6 million Jews killed. WW2 saw 26 million Russians killed. And they are supposed to be good with armies at their borders, and the US supporting Nazis?”

They have a generational fear response to Nazi symbolism, no less acute than the Jews have, no less real than if African Americans saw the KKK taking power in a town next door, waving nooses.

For certain, this is about total global control by our predatory capitalists – but it may have backfired on them. I think Putin is less likely to be overthrown now.

DIANE GEE is a senior contributing editor to The Greanville Post.

PUTIN may be Russia’s version of a Bonapartists ruler, combining in one a strong leader a heir to the best progressive traditions of his culture, a modern nationalist willing to keep the American imperium at bay, and a man also capable of keeping the domestic robber barons in check, and from eating the nation and causing anarchy.