The Economic Case for Taxing Meat 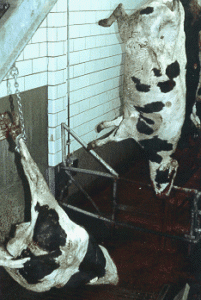 Shackled cows in assembly line. How far are we prepared to go to make a dollar or satisfy our habit of eating meat? With the new substitutes that resemble meat fiber to a fault, and are in fact superior in terms of nutrients, the last excuse has been removed. The palate does not suffer and vegetarianism does not mean to be an eater of bark. But the inertia continues and the suffering goes on.

As tax season ramps up, we’re bound to hear proposals aimed at making the revenue system simpler and more efficient. A perennial is the “sin tax.” Rather than tax earnings—when we really want people to earn money—why not tax things we don’t want people to do? Add duties to cigarettes, alcohol, and carbon dioxide to slow people’s smoking, drinking, and polluting, and you’ll do them and the world a favor while raising revenue for schools, hospitals, and roads. But why stop there? It’s time to add one more sin to the list of habits that should be taxed: excessive meat consumption.

Meat has always been part of the human diet. Few dishes are as wonderful as a bolognese sauce made with a combination of pork, lamb, and beef. But taxing pigs, sheep, and cows is essential to contain the spiraling costs associated with massive meat eating.

When it comes to gorging on meat, Americans remain at the top of the global league tables. U.S. consumption of beef per person has actually declined over the past few decades, from 52 kilograms a year in 1970 to 41 kilograms in 2008. But chicken consumption approximately tripled over that period, to 44 kilograms per person, and overall meat consumption climbed from 105 to 122 kilograms a year—considerably more than the average personal weight (although some of that meat is thrown away or eaten by pets). By comparison, Indians consume less than 5 kilograms of meat per person.

But as the rest of the world gets richer, it’s closing the gap with the U.S. The Food & Agriculture Organization of the United Nations reports that in 2012, 966 million pigs, 1.5 billion cattle, and 22 billion chickens were roaming (actually, mostly not roaming) the world’s farms. For cattle, that’s five times the number in 1890 and for pigs about a tenfold increase, according to Clive Ponting’s Green History of the World. That’s one factor behind the growing global obesity epidemic: a British study comparing meat eaters and vegetarians found average differences in weight between meat eaters and vegans of 5.9 kilograms in men and 4.7 kilograms in women—and a recent U.S. study also suggested that meat consumption was positively linked to obesity, itself a fount of two of humanity’s biggest killer diseases: cancer and cardiovascular. Metabolic syndrome itself, common among meat eaters is unknown among vegetarians.

At the other end of the consumption scale, all that meat production also makes for more expensive staple foods for the world’s undernourished. About one-third of the world’s cropland is given over to growing feed for animals. Including pastureland, livestock production occupies 30 percent of the land surface of the planet. Some of that land could be used instead to cultivate crops for human consumption. If you are concerned that growing corn for ethanol is raising food prices, you should be even more concerned by the larger impact of factory livestock farming.

Beyond meat’s impact on malnutrition, the livestock industry presents a growing global threat in its relationship with infectious disease. Domesticated animals have been the incubators of many of the world’s greatest killer diseases, from smallpox through measles to tuberculosis. The recent emergence of swine and bird flu suggests an increasing risk of pathogens jumping from the planet’s burgeoning domestic animal population to humans. We’ve added to that risk by regularly feeding factory animals antibiotics. Eighty percent of all antibiotics consumed in the U.S. are used on animals. This widespread use has been linked to the rapid emergence of antibiotic-resistant bacteria, including methicillin-resistant Staphylococcus aureus (MRSA), which kills 18,000 people a year in the U.S.

STORY: Farm Bill Stinks for the Meat Industry, and That’s Not Entirely Bad

Greater meat production also has negative environmental effects. Livestock accounts for about 8 percent of global human water use (the proportion is a little higher in the U.S.)  Wheat takes about 1,000 to 2,000 cubic meters of water per ton of crop; rice takes approximately double that. Taking into account the water demands of feedstock, cattle take between 13,000 and 20,000 cubic meters per ton of beef (although chicken does considerably better at around 4,000 cubic meters per ton). Land-based meat production is also a big factor behind declining fisheries worldwide. Millions of tons of fish each year are crushed into fish oil and dry feed to be fed to farmed fish as well as to pigs and chickens. And the effluence those animals produce creates “dead zones” in rivers and coastal areas.

ABOUT THE AUTHOR
Kenny is a senior fellow at the Center for Global Development and author of The Upside of Down: Why the Rise of the Rest is Great for the West.