Perspectives On Socialism And Animal Rights

By Roland Windsor Vincent
Editor, Eco-Socialism, The Environment, and Animal Rights
The cause is urgent, but it’s a long journey 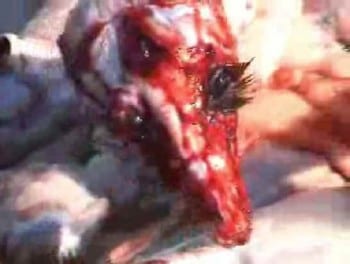 A raccoon dog, recently skinned alive for his fur. This is still regarded as legitimate and normal around much of the world, and the fur trade enjoys the status of a legitimate commercial occupation. Isaac Bashevis Singer was right in saying that, in a world dominated by humans, “each day was a Treblinka for the animals.”

Reaction to my contention that Animal Rights will only be won through Socialist revolution has been mixed, but much more positive than I had expected.

This is indicative of either a growing sophistication of Animal Rights activists or that the ranks of activists are swelling with those possessed of political acumen. Making my assertions even a few years ago would have elicited far different comments.

Negative criticism was dwarfed by positive responses, although that is hardly a scientific measure. Of the negative remarks a common theme emerged: Current and recent Socialist societies were as brutal to animals as any Capitalist ones, the logical conclusion then drawn being that the problem is people, or technology, or civilization, or something other than an economic system.

This is also the general rationale proffered by those Animal Rights activists who choose to remain apolitical. The usual canned response is that there is no difference between Liberals and Conservatives on animal issues.

I believe Socialism to be the only economic system that has a chance of embracing Animal Rights. And that is because Socialism offers no incentives to exploit, enslave, or murder animals. Unlike Capitalism, Socialism embraces a moral worldview. A moral compass suggests that the potential to extend compassion to animals is much more likely under Socialism than it would be under a system which is amoral to its core.

Those on the political Left have championed every advance in education, in democracy and freedom, in human rights. They have fought for the poor, the disenfranchised, and the exploited. In opposition to them on all these concerns have been Conservatives, who always defend the status quo.

The Liberals of 200 years ago fought against slavery but they were not ready to embrace racial equality. One planning on ending segregation would have found little support for the idea amongst 19th Century Liberals. But it is quite obvious that Liberals would have been the target audience for integration long before they embraced the cause, as it was a position naturally growing out of their social worldview.

Similarly, while it is true that today’s Socialists and Liberals have abysmal records on animal issues, we should not extrapolate those positions into the future. They are much more likely to embrace Animal Rights in the future than are Conservatives.

Evolving standards of decency, senses of compassion, and perceptions of justice all drive society to embrace an expanding circle of concerns about oppression, inequities, intolerance and exploitation.

Over time, the entire body politic moves ever to the Left. Today’s Conservatives are more Liberal than were the Liberals who ended slavery. Tomorrow’s Conservatives will be Left of today’s Liberals.