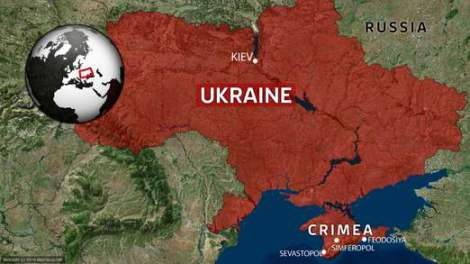 On the heels of the disasters left behind by the USA-led wars in the small countries of Iraq, Libya and Syria, among others, the reasons for America’s blatant and barely disguised aggression against Ukraine might seem at first puzzling. If America’s armed forces and its proxies left such socio-economic messes in such smaller and weaker countries, why the sudden all-out attack on Ukraine that translates into an attack on the powerful nuclear power Russia? If US forces could not defeat the Shia in Iraq, nor suppress the tribal society in Libya, nor break the Assad government in Syria, how could Washington’s power-mad neocons even dream of planting missile bases in Ukraine and of subduing an unbeatable Russia as both Napoleon and Hitler experienced?

It is difficult to distinguish Ukraine from Russia. Ukraine is as much Russia as Texas is the USA. Russian-Ukrainians in the traditional Russian city of Kiev, today claimed by bands of Fascists and neo-Nazis of the so-called Right Sector and the Svoboda political party, write daily in pure Russian on their Facebook pages of their disgust with the whole artificially mounted process. Though the majority in Kiev are Ukrainians, or Little Russians, Ukraine is still Russia. The attempt to separate them is pure folly.

The awkward and mad US attempt to simply skip over Ukraine, as if it didn’t count, is the acme of hubris, just as would a Russian-backed Mexican attempt to occupy Texas and California.

However, there is a secondary aspect of the US-NATO-EU aggression against Ukraine: the enduring American fear of the endemic germ-disease of Socialism/Communism in Russia that is very much alive today, and spreading in Russia and East Europe. The independent Socialist magazine, Monthly Review, recently quoted the Secretary of the Russian Communist, Gennady Zygunov, at the 14th plenum of the Party Central Committee on the 95th anniversary of the Russian Revolution that today’s Russian CP, together with the other main Socialist Party, regularly poll about 40% of the vote which some observers claim would be more than 50% if elections were a little more transparent.

The American fear of Russia is an old story. In November, 1917 the Bolshevik Revolution took place in Russia based on the slogan of “peace, bread and land.” Within five weeks, France, Britain and the USA decided to intervene against the antiwar Russian Bolsheviks, claiming it was necessary to keep Russia in the war against Germany.

Today we know that was not the real reason. The real reason was to stamp out the spreading contagion of Socialism. The Allied intervention nearly a century ago marked the real beginning of the Cold War against Russia. Today’s US/NATO/EU support for neo-Nazis and Fascists in Ukraine against Russia is the continuation of that same anti-Socialist crusade.

As Phil Braithwaite underlines in his book To Begin at the Beginning, the same “Allied intervention was responsible for Bolshevik terror (against real internal threats)—which was then used as the basic public pretext for continued intervention after November 1918.”

The English scholar, Braithwaite goes on the say that “the motivation and character of Allied intervention in Russia between 1917 and 1920 … were primarily ideological.”

“The purpose of the Allied intervention,” Churchill stated, “was to strangle the baby in its crib.” And thus, ultimately, one may safely add, the intervention was a primary cause of WWII. This same Allied anti-Socialist crusade motivated the non-intervention in Spain on the side of the Republic, the sell-out to Hitler in Munich and the subsequent policy of appeasement of the Nazi regime in the hope the Wehrmacht of the Third Reich would succeed in smashing Socialist Russia where the Allied intervention failed. Consequently, even the post-WWII arms race has its origins in the hostility to Socialism and the Soviet Union

The Russian has often been labeled the most religious person in Europe. One can argue that though Russian Communism was executed by Lenin or Stalin, they did not invent it. The Russian form of Socialism/Communism is closely linked to the Russian’s sense of Communitarianism. In ancient times, “the Russian village community, called in Russian the mir, was based on neighbourhood and property, with however the warmth and the patriarchal character of life.” (G.P. Fedotov in The Russian Religious Mind.) Even the word mir has messianic connotations inherent in Socialism; mir means also world and peace.

Moreover, according to Russian historiography, ancient Russian peoples and kingdoms sought to avoid wars and bloodshed.  Only extreme historical and geographical circumstances have pushed Russia into war, for example its drive for a maritime exit from the Black Sea to the Mediterranean.

Here is the issue today: Russia has not sought conflict in Ukraine. During Russia’s period of weakness after the disintegration of the former USSR, it had to accept US/NATO encroachments and military a/o missile bases in neighbouring nations like Romania, Bulgaria, Czech Republic, Hungary, and Poland and even in former Soviet republics like the Baltic States and Georgia. Russia even bore up under US-sponsored interference in Chechnya in the Caucasus.

However, today, an again strong Russia, pushed to the limit by American hubris, has said a loud No! to aggression against Ukraine, Russia’s spiritual Slavic brother. A powerful No! to the US strategy of placing missile sites in territory considered the cradle, the very soul of Russia. It has said No! to this new “Allied” intervention. Loud and clear. This intervention, as was the Napoleonic invasion, as was the Allied intervention in 1917, as was the Hitlerite invasion in WWII, is an attack on Holy Russia. Those previous interventions have much in common: they all ended in disastrous failures.

No one should be deceived by a puppet Fascist-Nazi regime in Kiev, one of Russia’s holy cities. People of Kiev are not deceived. People of the West Ukraine with its history of collaboration with Hitler’s legions invading Holy Russia in WWII are not deceived. Russia will never be content with re-claiming what is “hers”, the south-eastern, pro-Russian provinces of Ukraine. Russia will eventually re-absorb what is as much a part of Russia as is Texas of the USA.  Without Russia, Ukraine is hardly a nation that could not even organize properly world soccer championship games. As a people they are called in those parts “Little Russians”. A people-nation which cannot exist economically independent from Russia. Today, Ukraine’s puppet leaders are begging Europe and the USA to pay its debts to Russia for its indispensable gas supplies, while they pathetically decide to cut off water supplies to the Crimea already re-annexed to Russia. And dare to send troops eastwards toward Eastern cities whose Russian ethnic majorities have revolted against the US supported Fascist regime in their holy Kiev, many of which troops anyway defect to the Russian side.

The aspect of Russia’s historical preference for peace (which is not as esoteric a discourse as it might seem to more hardened readers) as compared to America’s marked preference for war reflect the extreme difference between two types of society. (As according to Emil Cioran, the difference between the very basic moral values of the two cultures: one for peace, the other for war.)

I don’t believe that Putin’s long silences are signs of a tolerance born from weakness —neither his own nor of the people he leads. Washington should be extremely careful not to overstep here the limits as it does regularly. As Cioran writes in Histoire et Utopie, “Ambition is a drug which makes of the addicted a madman in power.”

Senior Editor Gaither Stewart serves as The Greanville Post and Cyrano’s Journal Today European correspondent. His latest novel is The Fifth Sun (Punto Press). He’s also the author of several other books, including the Europe Trilogy, of which the first two volumes (The Trojan Spy, Lily Pad Roll) have been published by Punto Press, thrillers that have been compared to the best of John le Carré focusing on the strategy of tension and the encirclement of Russia, a topic of compelling relevance in our time.

Perspectives On Socialism And Animal Rights