Home ABOMINATIONS From Benghazi to Boko Haram: Why I support the Benghazi Inquiry

From Benghazi to Boko Haram: Why I support the Benghazi Inquiry 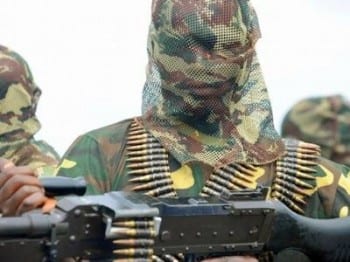 You can’t understand the threat posed to Nigeria by Boko Haram, or the ghastly destruction of Syria over the past three years, outside the context of “the vicious NATO obliteration of the state of Libya.” One huge crime begets many consequences, including the death of the U.S. ambassador in Benghazi. The Left should be outraged at Obama policies – in North Africa, in Syria, and in backing neo-fascists in Ukraine.

“The destruction of Libya not only led to the strengthening of Boko Haram – it also led to arms being transferred out of Libya to Syria.”

Seemingly out of nowhere, Boko Haram burst into the awareness of people around the world as a shadowy group of Islamists with the ability to carry out audacious attacks that paralyzed the army of the most populous country in Africa. People now want to know the group’s origins, where they came from, why they are kidnapping girls and how they became such a powerful threat. All important questions – but questions that cannot be answered by just looking at the internal politics of Nigeria, as important as those are, because Boko Haram is incomprehensible when decontextualized from the destabilization, death and destruction unleashed across Africa from the Sahel into West Africa as a result of one historic event – the vicious NATO obliteration of the state of Libya.

African Union Commission chief Jean Ping warned NATO [10], during its bombing campaign and arming of so-called rebel forces in Libya, that the weapons they provided the “rebels” would end up in the hands of al Qaeda throughout Africa. He said, “Africa’s concern is that weapons that are delivered to one side or another … are already in the desert and will arm terrorists and fuel trafficking.”

Former Nigerian President Olusegun Obasanjo expressed what many in Africa feared from the NATO attack on Libya [11]:

“We knew that at the end of the Libya operations, there would be fallouts. And the fallout would be where would all the weapons go? Where would be some of those who have been trained how to use weapons [and] how would they be accounted for? … Part of what is happening in Mali is part of the fallout from Libya, and we should not expect that Mali will be the last.”

Reports from the United Nations [12], the Guardian [13] newspaper and many other sources [14]reveal how Boko Haram benefited from the destabilization of various countries across the Sahel following the Libya conflict, receiving arms and training from an emboldened al Qaeda and its Saudi backers.

That is just one reason why the Benghazi hearing is important, especially for people concerned about the abduction of the school girls in Nigeria. The destruction of Libya not only led to the strengthening of Boko Haram – it also led to arms being transferred out of Libya to Syria, in violation of international law, to overthrow the sovereign government of Bashar al-Assad. This ended up increasing the military capacity of right-wing Salafi/Jihadi Islamists in a half dozen countries and setting the stage for the blowback on the anniversary of 9/11 that resulted in the death of the U.S. Ambassador to Libya and three other U.S. citizens.

But of course there is significant opposition to the hearings.

“House Republicans appear poised to give the Obama Administration its Iran-contra affair.”

In what House Democratic leader Nancy Pelosi [15] characterized as a “political stunt,” “subterfuge” and a “diversionary tactic,” House Republicans voted last week to form a 12-member committee to investigate the Obama Administration’s handling of the 2012 attacks in Benghazi.

Claiming that they now have a “smoking gun,” with the forced release of previously suppressed emails that suggest the Obama Administration deliberately misled the U.S. public about what it knew about events that led to the attack and death of the U.S. Ambassador to Libya, House Republicans appear poised to give the Obama Administration its Iran-contra affair – not with the objective to further weaken the Administration, but rather to destroy Hillary Clinton.

The response from the Democrats has been predictable. Democrats already lined-up behind a Clinton campaign understand that no matter what comes out this inquiry, Benghazi has the potential to become a permanent yoke that wears down the Clinton candidacy. But in another bizarre display of political and ideological subordination to the Democrat Party and its rightist elite, elements of the left have also expressed opposition to this inquiry.

One would think that those on the left would support this inquiry, as limited and partisan as it will be, on the democratic principle that the people have a right to know what occurred before, during and in the aftermath of the attack. But even more importantly, by demanding a more comprehensive examination of all the activity of the U.S. in Libya in the aftermath of the destruction of that state, including the mission of the CIA in Benghazi, the left can and should raise serious questions that expose the dangerous strategy of empowering anti-democratic, right-wing forces, from al Qaeda-connected jihadists in Syria to neo-fascists in Ukraine.

We understand that there will be an attempt to keep the focus narrow. Members of both parties and everyone in the higher echelons of the military/intelligence community knew that the U.S. had aligned with groups in Eastern Libya that were known to be jihadists. The fact that both parties supported the NATO intervention knowing that jihadists affiliated with al Qaeda played a major part in the overthrow of Gaddafi and that the largest CIA station in North Africa was established in Benghazi where it provided arms and was used as staging ground for inserting jihadist’s forces into Syria, means that both parties share an interests in avoiding the serious legal and moral implications of U.S. actions in Libya.

“The left can and should raise serious questions that expose the dangerous strategy of empowering anti-democratic, right-wing forces, from al Qaeda-connected jihadists in Syria to neo-fascists in Ukraine.”

I welcome the hearings and could not care less about the implications for the candidacy of Hillary Clinton or the reputation of Barack Obama. I am more interested in curbing the rightward militarist trajectory of U.S. policy. As an African American the plight of the more than 200 school girls captured by Boko Haram holds a special outrage for me. But I am also outraged by the murder of people defending their rights to self-determination at the hands of U.S.-supported thugs in Odessa Ukraine, outraged by the fact that people are daily terrorized by the constant buzz of U.S. drones that kill women and children in wedding parties and individuals who may “act” like they might be so-called terrorists, outraged that people can call themselves moral and even progressive and support the brutal Israeli occupation and de-humanization of Palestinians.

And I am outraged knowing that U.S. policy-makers don’t give a damn about the school girls in Nigeria because their real objective is to use the threat of Boko Haram in the Northern part of the country to justify the real goal of occupying the oil fields in the South and to block the Chinese [16] in Nigeria.

Exposing the whole sordid story of the destruction of Libya and the role of Al-Qaeda as the “boots on the ground” for U.S. geo-strategic objectives in North Africa and the Middle East represents the only strategy that an independent and principled left could pursue in wake of the fact that the hearings are going to occur. Anything other than that is capitulation, something that the left has routinely done over the last six years, and some of us still struggle against in the hope that one day the “responsible” left will eschew the privileges that stem from its objective collaboration with the interests and world-view of neo-liberal white power and re-ground itself in authentic radical principles and the world-wide struggle against Western domination.

Ajamu Baraka a long-time human rights activist and organizer is an editor and contributing columnist for Black Agenda Report. He is currently an Associate fellow at the Institute for Policy Studies in Washington D.C.