Capitalism and Its Mexican Genocide 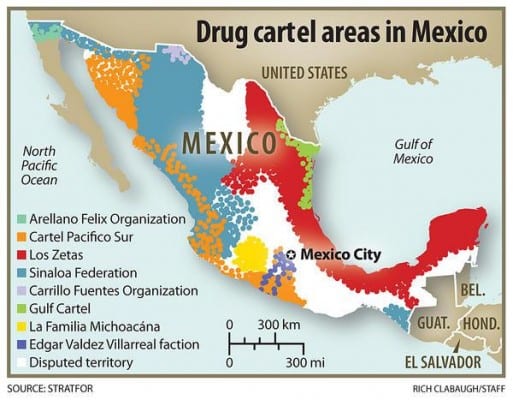 Capitalism accumulates wealth and profits the capitalists, whether under the aegis of a formal, or informal economy. But when greed is pitted against greed, as is common today, the people seldom benefit. Currently, we are witnessing a bloody clash between both realms of economy, a clash embodied by Mexico’s drug wars. Moreover, this warring south of the US borderland is no longer a simple byproduct of the capitalist clash in question. Simply put, the Mexican drug war amounts to genocide.

The ensuing genocidal tear in Mexico’s social fabric yet functions to profit those who grow richer from upped production and sales in both market places. Additionally, there is little-to-no comparable spillage over to the US side of the border. The reason for this is self-evident:  HYPERLINK “http://www.nytimes.com/2009/03/26/world/americas/26mexico.html?_r=0” American consumption drives both economies!

The misfortunate collateral in the war between formal economic fascists and the informal economy’s drug oligopoly includes the wanton destruction of Mexico, the terrorizing of its people, and the unnecessary loss of life. Deaths total some  HYPERLINK “http://ncronline.org/news/global/counting-mexicos-drug-victims-murky-business” 125,000 after Calderon’s reign ended in 2012, coupled with nearly  HYPERLINK “http://www.washingtonpost.com/world/the_americas/mexicos-crime-wave-has-left-up-to-25000-missing-government-documents-show/2012/11/29/7ca4ee44-3a6a-11e2-9258-ac7c78d5c680_story.html” 30,000 disappearances in 2013 alone.

No more should die in this bloody tug-of-war for profits. We need to pursue the condemnation of this mounting genocide. Revealing it for what it is can be the first step in that direction. Furthermore, connecting the death toll and the murderous proclivities of capitalist forces with the elements of genocide is  absolutely essential: It is responsible for all genocidal acts.

In Mexico, the war waged by the formal economy against the informal economy pressurizes the need to control and subdue all Mexicans, who have nothing to do with generating narco-profits. The pressure builds unto the point of genocide. The war then ceases solely to hinge on profitability, and it thus depends who maintains the power and the sovereignty necessary to continue reaping unbridled profits. This means targeting specific, innocent people in order to do so.

The victims of the drug wars belong to the explicit “group” whose maiming,  HYPERLINK “http://www.bbc.com/news/magazine-24772724” beheading and murdering seeks to destroy them “in part,” if not “in whole.” But whereas some may say, or claim, that the hundreds of thousands of victims do not belong to any particular “national” group, how could it be more obvious that they do? Their unification rests in their innocence. So, how many more must die to have the rest of the world turn from shaking its head to actually working against the true genocidal warlords and their handiwork in Mexico?

The “Analysis Framework,” set forth by the OSAPG provides eight categorical factors to determine whether or not a risk of genocide exists in a given situation. A look into this framework further uncovers the genocide that is happening in Mexico today. The categories are unranked, and any absence of information regarding one or more categories does not presuppose an absence of genocide, or of the risk of genocide. The aggregate effect of these factors is what ultimately matters. It is through looking at these categories and assessing their cumulative effect that the genocide in Mexico becomes unbelievably more apparent.

The first factor is “Inter–group relations, including record of discrimination and/or other human rights violations committed against a group.” Just a few of the issues that need be addressed under this first category bespeak the real horror of the homicides, the homicidal violence, and the ‘disappearances’ in Mexico that are wrought by warring over accumulation. To start, there are serious tensions, including power and economic tensions, between victims of the drug war and their aggressors. There is an existing conflict regarding “land, power, security and expressions of identity.” There is a (homicidal)  HYPERLINK “http://www.washingtonpost.com/world/the_americas/calderon-finishes-his-six-year-drug-war-at-stalemate/2012/11/26/82c90a94-31eb-11e2-92f0-496af208bf23_story_1.html” discrimination against the victims of the informal economy’s illicit drug trade, including the stalwarts of the formal economy and their military client terrorists sicced on all opponents in Mexico. In addition, there are discriminatory practices at many levels of political life, systematic exclusions of the victims from positions of power, and massive  HYPERLINK “http://www.hrw.org/news/2013/11/12/mexico-build-accurate-database-disappeared” human rights violations.

The second factor is considering “Circumstances that affect the capacity to prevent genocide.” Arguably, there is little, if any, operative legislative protection, effectual national  HYPERLINK “http://www.amnesty.org/en/news/un-mexico-must-address-dire-human-rights-situation-concrete-actions-not-rhetoric-2014-03-19” human rights institutions, or an applicable presence of international actors (like the UN) present in Mexico. Even assuming the presence of such elements, none are clearly capable of protecting the vulnerable group of victims. At least, they have not been. Mexico, in fact, just legalized  HYPERLINK “http://www.latinpost.com/articles/12278/20140511/mexico-legalizes-vigilante-groups-fuerzas-autodefensas-formed-because-of-governments-inability-to-stop-attacks.htm” vigilante groups to help combat the problem, despite joint ventures with the DEA and whatever other funding it receives from the US.

Number three is the “Presence of illegal arms and armed elements.” Upwards of  HYPERLINK “http://www.foxnews.com/us/2012/04/26/mexico-seized-68000-guns-from-us-since-2006/” 70,000 guns were found by Mexican authorities between the years 2006 and 2012. An alarming number of these weapons came from US border states. Furthermore, the OSAPG’s third category suggests such weapons as indicative of genocide when “there exists a capacity to perpetrate genocide,” including but not limited to killing. Unfortunately, conditions in Mexico vis-à-vis arms and the capacity for genocide point toward genocide rather than away from it.

Number four on the list of OSAPG’s categories is “Motivation leading actors in the State/region; acts which serve to encourage divisions between national, racial, ethnic, and religious groups.” The key element worth consideration here is any relevant role, active or passive, of actors outside the country such as foreign governments, and their political or economic incentives for acting.  HYPERLINK “http://www.cfr.org/mexico/mexicos-drug-war/p13689” The US has poured untold amounts of money into Mexico for the sole purposes of eradicating illicit drug trade and its illicit drug oligopoly. The price has been paid in full in innocent Mexican blood. Genocide, given this fourth category, is also apparent.

Five: “Circumstances that facilitate perpetration of genocide (dynamic factors).” To be sure, there are events that “suggest a trajectory towards the perpetration of genocidal violence” in Mexico. There is a  HYPERLINK “http://www.nytimes.com/2011/08/07/world/07drugs.html?pagewanted=all” strengthening of military and security apparatuses; there is the imposition of extraordinary security measures that deteriorate Mexicans’ civil rights/liberties. All of the above only increases with time.

Category seven refers back to the original, working definition of genocide set forth by the OSAPG and the “intent to destroy in whole or in part…” In Mexico today, there is a large-scale armed conflict, invariable beheadings and other signature torture methods, dismemberment of “those already killed,” revealing “a level of dehumanization of the group or euphoria at having total control over another human being…” There are also targeted eliminations of leaders, whether local Mexican officials or  HYPERLINK “http://www.newsweek.com/2014/05/02/murder-juarez-247089.html” US Consulate workers.

Finally, category eight addresses “Triggering factors.” Currently, there has been military deployment to act against civilians assumed to be part of the illicit drug trade and its oligopoly. There have been armed hostilities for years, with hundreds of thousands of innocent Mexicans caught in the middle of it all. Unfortunately, the drug wars taking place in Mexico match many elements of the eight categories set forth by the OSAPG, all of which are necessary for analyzing genocide, or the possibility thereof. The UN’s “Analysis Framework” also mentions that genocidal intent can develop gradually. It does the skeptic well to consider that there is nothing gradual about tens of thousands of deaths within the span of six years, accompanied by the untold thousands of abductions and disappearances. The time to act against this genocide wrought by economic warring is now. No more people should die in a genocide over profit in Mexico. Despite the usual discontents of capitalism, this warring and the economic depredations borne by the Mexican people do not stop when the press or popular rhetoric arrives at words like “victim,” or “casualty.” This only discolors the truth. What is happening now is nothing  short of genocide; it can have no other name.

Mateo Pimentel lives on the Mexican-US border, writing for many alternative political newsletters and publications. Much of his work can be found on CounterPunch.com