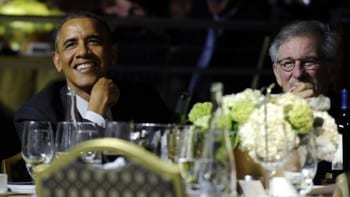 It’s no surprise that imperial states think of themselves as having a monopoly on humanitarianism.

In the words of President Obama, the United States has for decades been “an anchor of global stability.” Even filmmakers buy into this charade. Recently Steven Spielberg, in one of his less known departures into the world of science fiction, honored President Obama for his humanitarianism at an event organized by the Shoah Foundation. Obama was recognized as an “Ambassador for Humanity” whose “interest in expanding justice and opportunity for all is remarkably evident.” It’s easy to laugh at fantasies of this kind but when national leaders attempt to act on them they should be examined more seriously. Nigerian militant group Boko Haram has kidnapped over 200 schoolgirls and US policymakers and the “free press” have exploded into a fit of pro-interventionist hysteria. It’s hard to escape media reports about the ruthless cruelty of Boko Haram’s leader Abubakar Shekau and his vow to sell his hostages into slavery.

Outrage has covered a broad spectrum of media and political personalities from Rep. Peter King who said “If the president decided to use special forces, I certainly would not oppose them,” to Michelle Obama who joined the “Bring Back Our Girls” Twitter campaign and released a video condemning the “grown men” in Boko Haram attempting to “snuff out” the aspirations of young girls. Missing from this hysteria is a serious look at the US role on the African continent and the credibility of its “humanitarian” claims.

Since the early post-war period the US has been an overwhelmingly negative force in Africa. Shortly after the Second World War US policy makers decided that the African continent “was to be ‘exploited’ for the reconstruction of Europe.” In the following years the US contributed to this exploitation by supporting the assassination of Patrice Lumumba, the apartheid government in South Africa and brutal dictators like Mobutu Sese Seko in the Congo and Samuel Doe in Liberia. Nothing has fundamentally changed since this period. In fact, US involvement in Africa has grown since the creation of the US Africa Command also known as AFRICOM. Scholar Stephen Graham points out how AFRICOM has targeted Nigeria’s oil wealth. In his book Cities Under Siege: The New Military Urbanism he writes that AFRICOM “is being established with the explicit goal of dealing with ‘oil disruption’ in Nigeria and West Africa.”

It is widely conceded that the popular base of Boko Haram is a response to severe economic inequality that has disproportionately impacted Nigeria’s northern region. Unlike the south, Nigeria’s north faces severe problems meeting basic human needs of education, healthcare and clean water. Unemployment among young males in northern Nigeria “is in excess of 50 percent.”  This stark inequality is largely a symptom of what’s commonly called its “oil curse”, nations which are extraordinarily rich in natural resources but, due to corporate and often western-backed policies [that generate and abet runaway corruption], are unable to meet the basic material and educational needs of its citizens. Consequences of this curse can be deciphered in the Pentagon’s latest Quadrennial Defense Review where the Department of Defense outlines a policy “to sustain a heightened alert posture in regions like the Middle East and North Africa.” The review also highlights “the security of the global economic system” [capitalism] as one of the primary goals of US “National Security Strategy.”

Many would dismiss these observations as a “justification” of Boko Haram’s crimes but it’s quite the opposite. The crimes of the Nigerian state, amply documented by reputable organizations like Human Rights Watch, have done far more to strengthen the arguments of Boko Haram than any analyst ever could. HRW reports that Nigerian security forces “have engaged in numerous abuses, including extrajudicial killings, which contravene international human rights law and might also constitute crimes against humanity.” Even conservative analysts like John Campbell of the Council on Foreign Relations conceded that “Individuals in the north talk about a military that comes in and responds to the Boko Haram threat as being just as predatory and disrespectful of their civil liberties as Boko Haram has been,” and “an elephant in the living room is just how much popular support Boko Haram actually enjoys.” And this isn’t the only “elephant in the living room.” Other elephants include the stunning similarity between Boko Haram’s crimes, in terms of their impact on education, and those of high officials in Washington. One of the main arguments for intervention in Nigeria is that it’s necessary to defend the rights of girls education. Girls education should be defended but it’s very easy to demonstrate how committed policy makers in the US are to girls education. Last year NYU and Stanford University released a study titled Living Under Drones. In this report they describe how President Obama’s drone program has endangered access to education among Pakistani children or as the study states “some of those injured in [drone] strikes reported reduced access to education and desire to learn because of the physical, emotional, and financial impacts of the strike.” Pakistani parents have also reportedly began pulling their children from school out of fear that they will be killed in a drone strike.

Michelle Obama reserved no words for these young girls though she did take time to praise the heroism of Malala Yousafzai in her fight for girls education in defiance of the Taliban. Interestingly, Mrs. Obama did not mention that Malala also criticized her husband’s drone policy for “fueling terrorism.” Apparently, the US does not “snuff out” the dreams of young girls. The US only snuffs out “militants.” Rational analysis would also take into consideration the view of the Nigerian public. A 2013 Pew poll reports that only 39% of Nigerians–it was 74% in 2010–support President Obama’s “international policies”, a strange figure considering the US is “an anchor of global stability.” The percentage of Nigerians who look at the US favorably decreased from 81% in 2010 to 69% in 2013. Moreover, a stunning 12% of Nigerians think that their country is “moving in the right direction.” Filtered through the system of American power, this means President Jonathan is “committed to building on the democratic process”, Obama’s words when Jonathan visited the US. But this shouldn’t be too surprising. President Obama’s support for brutal, anti-democratic governments in the Middle East and North Africa is very consistent. Take for example his description of Hosni Mubarak, a dictatorial mass murderer, as “a proud patriot.”

When examined in historical context it’s quite clear that the United States is participating in the same ideological campaign that the British embraced, in a much more sustained fashion, during their colonial rule. Historian and sociologist W.E.B. Dubois wrote about this in the early post-independence years of Nigeria.  Since Nigeria was a “rich land” with “stores of coal, oil, lead, tin, zinc and other metals,” it was a prime target for western industrial capitalists. In order to combat any move toward socialism the British sought to manipulate Nigerians to regard them “mainly as benefactors.” But this campaign was unable to defeat the Nigerian people’s “irresistible demand for independence.” If the US military continues its expansion into Nigeria we can expect similar attacks against this demand for independence. Military intervention of any kind runs the risk of drowning out the voices of Nigerians who have bravely stood up against these atrocities, setting the stage for a catastrophe too painful to imagine.

Xavier Best is a writer and independent political critic who resides in Atlanta, Georgia. He is an editor and contributor for The Southern Praxis and maintains a regularly updated blog at xavierobrien.wordpress.com. He can be contacted via email atxb00042@gmail.com.

B., Du Bois W. E. The World and Africa: An Inquiry into the Part Which Africa Has Played in World History: An Enlarged Edition: With New Writings on Africa, 1955-1961. New York, International Publishers: n.p., 1972. Print.

Welcome to Nulandistan: A Multimedia Look at What the US and EU Have Unleashed on Ukraine