Articles you should have read the first time around, but didn’t.
Sadly but logically, considering what the system does to penetrate every institution in America, what the NABJ does is exactly what Journalism Schools do around the country: manufacture new, unquestioning cogs for the media machinery instead of real journalists. 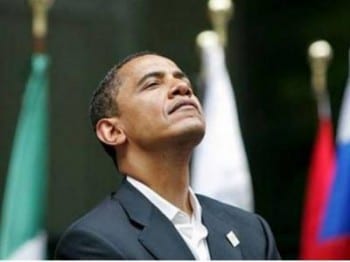 Barack Obama’s top African American aide assures Black journalists that the president has “genuine love” for the Black community. It is an insubstantial line of inquiry, the product of “an infantile obsession with the inner world of the Obamas that is wholly disconnected from the real world of economic policy, and of war and peace.” Unfortunately, in the Age of Obama, Steve Harvey, the “professional media ignoramus,” passes for a journalist.

“Many Blacks in the corporate media and what’s left of the Black-owned press generally act as public relations agents for The First Black President.”

President Obama has Big Love for Black America. We know this, because Valerie Jarrett, the senior Black person at the White House and his good friend from Chicago, said so at the New Orleans convention of the National Association of Black Journalists, the NABJ, last weekend. The president “has a genuine love for the Black community,” said Jarrett – and that was quite sufficient for many of the assembled Black journalists. At an interview session, one asked if the White House sometimes felt that there was “no pleasing” Black folks. Jarrett replied that, No, she didn’t feel that way. And why should she, when so many Blacks in the corporate media and what’s left of the Black-owned press generally act as public relations agents for The First Black President.

Another NABJ member could think of nothing more probing to ask than whether Obama occasionally longed for a chance to just kick back and act “unabashedly Black.” “He IS Black,” said Jarrett. “He’s the Black president. He doesn’t hide it.”

This is what often passes for journalism in Black America: an infantile obsession with the inner world of the Obamas that is wholly disconnected from the real world of economic policy, and of war and peace. Such reporters become indistinguishable from the antics of Steve Harvey, the professional media ignoramus, and the schoolyard politics of syndicated disc jockey Tom Joyner.

“The NABJ is more concerned with Black jobs in journalism than with how journalism can be made to serve the Black public.”

There were some at the NABJ convention who thought Valerie Jarrett had violated some sort of protocol by making too much of a campaign-style speech – although that, of course, is her job. It is the reporters’ job to tear that speech to shreds, with journalistic vigor, when it veers from the truth. To fail to do so is much worse than a violation of protocol: it is a betrayal of one’s profession and solemn obligation to the public – in this case, most especially, the Black public. But NABJ executive director Maurice Foster was eager to characterize Ms. Jarrett as someone who has been, in his words, “a good supporter of NABJ.” He said: “She’s always lent herselfto project the image of NABJ in a positive light and the good things that we do.”

Not a hint of the adversarial relationship that must exist between real journalists and the State. Mr. Foster is proud that the president’s closest advisor and longtime friend is a friend of the NABJ, representing thousands of Black journalists. Of course, there could be no such political friendship if Black journalists were doing their job, aggressively examining the president’s actual policies rather than behaving like boosters and fans.

But, there is a kind of logic to this corruption of Black journalism. As I learned 37 years ago, while helping to organize the Association of Black Journalists in Washington, DC, the NABJ is more concerned with Black jobs in journalism than with how journalism can be made to serve the Black public. For NABJ, it’s all about diversity in the newsroom. Black journalistic faces are role models – even if they’re broadcasting racist trash on FOX News or collaborating in lies about Black people in the local paper. Barack Obama is the biggest Black role model of them all and, therefore, can count on the lesser role models of Black journalism. So, to hell with the profession – and to hell with the people. All Power to the Role Models!

For Black Agenda Radio, I’m Glen Ford. On the web, go to BlackAgendaReport.com.

We have created a Goebbels like media without the public face, without the minister. It’s really quite bizarre, in terms of controlling the media  and access, this country is looking more like Nazi Germany every day. Fascism has created itself like a unnatural organism in a lab somewhere. Glen, you are a great American.

Where does Steve Harvey get off calling Tavis Smiley and Cornel West “Uncle Toms”?