As usual overwhelming propaganda power and layer upon layer of ignorance make the upside-down reality served up by Ministry of Truth the majority view of what is happening in Africa. 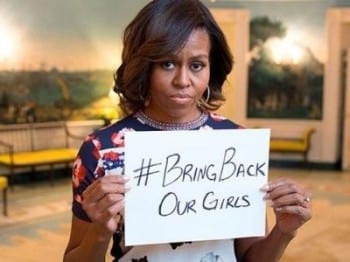 The #BringBackOurGirls campaign has become the loudest voice for U.S. imperialism and military domination of Africa. It’s only message is that the U.S. “do something” – as if America is not already responsible for the death of millions of Africans in Congo, Somalia and elsewhere. #BringBackOurGirls masks the reality that Washington’s real mission is to protect corporate theft of Nigeria’s wealth.

“US imperialism is the real terrorist for African people and the root of terrorism in Africa.”

When tragedies occur, questions arise. If a close relative is injured in a car accident, the affected family may ask a number of questions for both clarity and guidance. One question certain to come up is “who or what is responsible for the accident?” Most people wouldn’t accept an answer to this question from just anyone. Instead, concerned family and community members would probably seek verifiable evidence that leads to logical conclusions about the nature of the incident.

The #BringBackOurGirls campaign doesn’t appear interested in asking the difficult questions necessary to understanding the forces behind the kidnapping of 300 young girls in Nigeria. The campaign instead calls for US intervention to track down the so-called “terrorist” organization, Boko Haram. US imperialism responded quickly by sending marines to Nigeria, escalating US militarization in a country already dominated economically and politically by the West. #BringBackOurGirls supporters achieved their objective of further US militarization at the expense of African people. The #BringBackOurGirls campaign is thus not a social movement at all, and it must be clearly understood that there is much more to the kidnappings in Nigeria than the campaign is willing to address.

The motives of the #Bringbackourgirls campaign are unclear. The US corporate media is focusing most of its attention on hand selected US-based Nigerians demanding US intervention. Is the campaign’s main objective to bring the young Nigerian women back to their families, as it claims? Or is it to enhance US militarization and neo-colonialism in Africa? So far, the campaign’s use of social media and street outreach only reinforces public confusion around US imperialism in Africa.

US imperialism built its foundation by enslaving Africans within its own borders, and did so into the later half of the 19th century. However, it was not until the middle of the 20th century that the corporate masters of US imperialism set their direct sites on the African continent. During this period, the European colonial powers were severely weakened from WWII. European colonialism relinquished settler status in response to national liberation movements in Africa and domestic financial crisis from post WWII destruction. Washington saw the exit of European settler colonialism from Africa as the perfect opportunity to exploit the great wealth of the continent through US military intelligence (CIA) and Bretton Woods institutions (IMF and World Bank).

“The campaign’s use of social media and street outreach only reinforces public confusion around US imperialism in Africa.”

Kwame Nkrumah, the first revolutionary President of independent Ghana, was deeply critical of US imperialism in Africa. Nkrumah wrote in “Class Struggle in Africa that Washington aided neo-colonialism by financially and militarily supporting the development of an African bourgeoisie. Political leaders and freedom fighters who envisioned an economically independent and unified Africa were assassinated or overthrown by the CIA, such as Patrice Lumumba of the Democratic Republic of Congo and Nkrumah himself. After propping up compliant African states and fueling internal strife, Washington exerted its influence in the IMF and World Bank to establish friendly “trade” deals that transferred Africa’s wealth straight to US multinational corporations and those of allied nation-states. In such favorable conditions, US capitalism profited from the neo-colonial exploitation of Africa into the 21st century.

Today, US economic hegemony is increasingly being challenged both in the region and the world by socialist China. US imperialism’s response is to further entangle Africa into its war machine. The US African Command (AFRICOM) currently has relations with all but two African countries (Eritrea and Zimbabwe). In every corner of Africa, AFRICOM has vastly increased its footprint through drone surveillance, weapons distribution, and the training of African security forces in friendly states. AFRICOM’s purported mission is to protect US “national security” interests, a euphemism for the protection of plundered resources. The agency does this by arming and training African armies to serve the interests of US imperialism.

“The Shell Corporation is responsible for the mass impoverishment of Nigerian farmers and workers.”

US imperialism has been conducting military operations in Nigeria since at least 1999. AFRICOM, officially established in 2007, became involved in the training and deployment of security forces in the Niger Delta. It is in this resource rich region where Shell Corporation exports much of Nigeria’s vast oil reserves to the West. The Shell Corporation is responsible for the mass impoverishment of Nigerian farmers and workers. The #BringBackOurGirls support for further intervention from the US puppet state in Nigeria masks the reality that US imperialism is protecting the corporate theft of the country’s wealth from the Nigerian people.

This reigns true in every region of Africa. In the east, the US and AFRICOM backed Ethiopia’s invasion of Somalia in 2006, destabilizing the nation’s government and leaving millions to starve from withheld food-aid and fend for themselves against CIA sponsored death squads. In central Africa, the US and AFRICOM armed and financed proxies in Uganda and Rwanda, which proceeded to loot the Congo’s coltan, cobalt, and lithium for US and Western multinational corporations. In this ongoing conflict, six million Congolese have been murdered since 1996. In southern Africa, The ANC-led South Africa remains a neo-colony where the profits of US and Western capital are protected at the expense of the Black majority. Further, the US and EU imperialist alliance strapped economic sanctions on Zimbabwe in hopes that the country will reverse its land reform and indigenization policies.

“Since the fall of independent Libya, evidence of terrorist elements causing chaos across Northern Africa has become impossible to ignore.”

And in 2011, the US-NATO armed foreign terrorist insurgents in Libya responsible for toppling one of the last economically independent countries in Africa. The Libyan Jamahiriya nationalized oil wealth and provided Libyans with free healthcare, education, and housing. Chairman Muammar Gaddafi was a staunch supporter of African liberation movements. He also supported Palestinian resistance against Zionism and Israeli settler colonialism. For his opposition to US hegemony, Gaddafi was murdered without trial and Libya was bombed to bits. In NATO’s 2011 bombing campaign, an estimated 100,000 Libyans were murdered and 50,000 were reported disappeared. In cities like Sirte, Black Libyans were lynched and driven into exile by racist, Western-backed terrorists. Since the fall of independent Libya, evidence of terrorist elements causing chaos across Northern Africa has become impossible to ignore. Seymour Hersh’s revelation that Libya was a virtual supply station for US-NATO backed terrorists in the campaign to destabilize Syria exposes US imperialism’s role in the proliferation of terrorism in Africa.

US imperialism is the real terrorist for African people and the root of terrorism in Africa. The vision of a liberated and decolonized Africa promoted by Kwame Nkrumah cannot occur if US imperialism is allowed to exist in Africa, but the #BringBackOurGirls campaign appears not to care. The rhetoric emanating from the mainstream, corporate campaign reinforces US imperialism in Africa, which essentially is a continuation of hundreds of years of Western colonialism, white power, and neo-colonialism on the continent. US military intervention finds ideological justification in the Western worldview that claims Africa, and in this case Nigeria, is ungovernable without “aid” from US imperialism. Yet “aid” from US imperialist interests has been happening for years in Nigeria and all that has come from it is more poverty, internal conflict, and land theft. So, while some may tweet #BringBackOurGirls, the movement we really need to build is one that demands US imperialism out of Africa all together.

Danny Haiphong is an activist and case manager in the Greater Boston area. You can contact Danny at: wakeupriseup1990@gmail.com. [6]