The Great Challenge-Oil + The Secret of the Seven Sisters 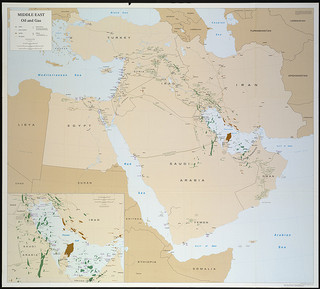 These documentaries and article show the US policies in the Middle East designed according to its dire need for oil. The US overthrows governments if they don’t comply with its policies or support them if they prove to be helpful in this regard.

[A]s a person who doesn’t take “sides” when it comes to major world news developments, one who believes there is only one side – humanity, it is especially important given recent events in Iraq and the Middle East to get to the truth. The documentary film at the end of this writing – “The Great Debate: Oil” – is a production of Press TV, a media company based in Iran, and it examines a very timely subject: energy resources and the history of war in the Middle East. The information and views expressed are extremely relevant to what is happening now in Iraq and the potential escalation of violence in the region. This is a very dangerous time for the people of the Middle East. Those planning for escalation of violence must be stopped.

When hired mercenary army Islamic State of Iraq and Syria took control of the Iraq city of Mosul, 500,000 citizens fled the city.

Men, women, and children of the Middle East have suffered through generations of war and violence, endured soul-destroying experiences that no persons can adequately describe, and need the help of humanity to bring suffering by the people there to an end. Nations in the Middle East must be allowed to organize their societies democratically in whatever way the people of those nations wish, without interference from either neighboring countries or nations/powers outside the region. Wars of aggression to gain control of any Middle East country’s natural resources, without any provocation on the part of the attacked nation, have to be called for what they are: mass murder.

Sadly, the people of the Middle East have been the victims of wars of aggression for far too long.

What is occurring now in Iraq is the latest war of aggression, fought in the newest form of warfare: mercenary armies. There is no difference between the mercenary soldiers known as the Islamic State of Iraq and Syria (ISIS) and professional assassins hired by the mafia, men who come from various lands in the Middle East and lands outside the region, whose “job” it is to overthrow governments using murderous methods if necessary.  The target governments of these hired assassins are in nations which have decided to equitably share the financial returns from the sale of energy resources, which puts at risk the nations of the Middle East that are monarchies and undemocratic.

The real reasons for wars in the Middle East has nothing to do with establishing “freedom and democracy” but everything to do with concentration of wealth and power by some, in contrast to others who share their nation’s wealth across the populace. Those who have accumulated tremendous wealth and power through the decades while their nation’s citizens go without have to put down neighboring nations which share the natural resource wealth, and this is what we find occurring now.

Monarchies must finance hired assassins to overthrow the governments of their neighbors who share the wealth because, if allowed to carry on with a sharing society, there is a good chance that the monarchs would face demands for changes to their societies that mirror the sharing nation’s “good example.” But wealth and power are not easy to give up once one has accumulated them, hence the “good example” must either be blocked, destabilized, or destroyed.

This is what happened in the 1950′s to democratically elected President Mohammad Mosaddegh of Iran, who was overthrown in a violent coup carried out the United States’ Central Intelligence Agency, after he nationalized Iran’s oil resources to guarantee more profits went to Iranians. Before Mr. Mosaddegh’s election victory, British and American oil companies were buying Iran’s oil at very low prices, so the nation was losing revenue in large dollar amounts, therefore unable to help the Iranian people as much as they eventually could by nationalizing.

This was perfectly legal and just on the Iranian people’s part, as the oil was theirs.

But this has historically been the case when there is a clash between political philosophies – wars occur when leaders of nations with coveted natural resources decide to utilize those resources for the good of their societies instead of bowing to demands from outside powers. Mosaddegh became followed/replaced by the Shah of Iran, who was a cruel dictator over the Iranian people until they overthrew him in the 1979 Iranian Revolution. The Shah became extremely wealthy from corrupt business dealings with western oil corporations, while the Iranian citizens saw little of the profits from the sale of oil.

Is it any wonder that the Iranian people have a negative opinion of America, when they had to live for over 25 years under a brutal dictator? Then, in the 1980′s the United States supplied weapons to Saddam Hussein for the Iran-Iraq War which resulted in the deaths of over a million people, as US intent was to destroy the Iranian “good example.” How would Americans feel about Russia if they backed Canada in a war against the United States and one million Americans died? What if China carried out a violent coup against the democratically elected President of the United States, then installed a ruthless dictator for over 25 years?

Forward to 2003 and the Iraq War. How would Americans feel about Australia if Australia placed economic sanctions on the United States and 500,000 children died as a result? What if Australia made up false intelligence to justify an Australian invasion on American soil, then started an illegal war of aggression where hundreds of thousands of Americans died, Australia used depleted uranium weapons they knew would severely harm Americans for generations, and essentially destroyed America?

What if the tables were turned? Would Americans call for war crimes trials for Australian leaders who lied to start the illegal war of aggression?

Americans would be a “little upset”, wouldn’t they, if Saudi Arabia, Qatar, Turkey and Russia paid, trained, supplied and armed hired mercenaries to enter Canada and Mexico, who then crossed the borders to American soil, attacking innocent civilians with bullet and mortar rounds, destroying electrical utilities, schools, water facilities, businesses, etc. – while committing the most barbaric killings known to man. This has been occurring for over three years in Syria where over 170,000 men, women and children have been killed; millions more are refugees in the world’s largest current humanitarian crisis.

Those who have committed war crimes in the Middle East, namely George W. Bush, Dick Cheney, Tony Blair and others, must be held accountable/punished for their crimes in the world’s court of jurisdiction. Why is this of absolute importance? Because they literally opened “the gates of hell” in the Middle East, and the only first step to close those gates is doing the moral and right thing. Never again can powerful leaders be allowed to harm untold numbers of fellow human beings – innocent human beings – with impunity.

No man or woman on this Earth should be exempt from facing justice for war crimes and/or crimes against humanity.

The Congress of the United States, in strict accord/compliance with the U.S. Constitution, must debate and vote on any declaration/act of war in the Middle East or elsewhere in the world.

Powerful leaders are harming innocent human beings now. No man is above the law.

The world’s war criminals have to be stopped.

The Secret of the Seven Sisters

Al Jazeera documentary about the history of oil cartels and how geo-political relations are dominated by oil.