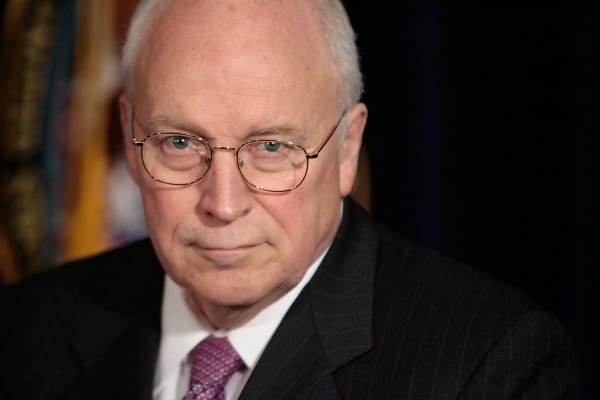 The Criminal Age of Cheney: Why isn’t this war criminal and his accomplices in a dungeon instead of in front of millions spewing his usual lies?

[T]he front page of The New York Times on June 26 featured a photo of women mourning a murdered Iraqi.

He is one of the innumerable victims of the ISIS (Islamic State in Iraq and Syria) campaign in which the Iraqi army, armed and trained by the U.S. for many years, quickly melted away, abandoning much of Iraq to a few thousand militants, hardly a new experience in imperial history.

Right above the picture is the newspaper’s famous motto: “All the News That’s Fit to Print.”

There is a crucial omission. The front page should display the words of the Nuremberg judgment of prominent Nazis – words that must be repeated until they penetrate general consciousness: Aggression is “the supreme international crime differing only from other war crimes in that it contains within itself the accumulated evil of the whole.”

The U.S.-U.K. invasion of Iraq was a textbook example of aggression. Apologists invoke noble intentions, which would be irrelevant even if the pleas were sustainable.

For the World War II tribunals, it mattered not a jot that Japanese imperialists were intent on bringing an “earthly paradise” to the Chinese they were slaughtering, or that Hitler sent troops into Poland in 1939 in self-defense against the “wild terror” of the Poles. The same holds when we sip from the poisoned chalice.

Those at the wrong end of the club have few illusions. Abdel Bari Atwan, editor of a Pan-Arab website, observes that “the main factor responsible for the current chaos [in Iraq] is the U.S./Western occupation and the Arab backing for it. Any other claim is misleading and aims to divert attention [away] from this truth.”

In a recent interview with Moyers & Company, Iraq specialist Raed Jarrar outlines what we in the West should know. Like many Iraqis, he is half-Shiite, half-Sunni, and in preinvasion Iraq he barely knew the religious identities of his relatives because “sect wasn’t really a part of the national consciousness.”

Jarrar reminds us that “this sectarian strife that is destroying the country … clearly began with the U.S. invasion and occupation.”

The aggressors destroyed “Iraqi national identity and replaced it with sectarian and ethnic identities,” beginning immediately when the U.S. imposed a Governing Council based on sectarian identity, a novelty for Iraq.

By now, Shiites and Sunnis are the bitterest enemies, thanks to the sledgehammer wielded by Donald Rumsfeld and Dick Cheney (respectively the former U.S. Secretary of Defense and vice president during the George W. Bush administration) and others like them who understand nothing beyond violence and terror and have helped to create conflicts that are now tearing the region to shreds.

Other headlines report the resurgence of the Taliban in Afghanistan. Journalist Anand Gopal explains the reasons in his remarkable book, No Good Men Among the Living: America, the Taliban, and the War through Afghan Eyes.

In 2001-02, when the U.S. sledgehammer struck Afghanistan, the al-Qaida outsiders there soon disappeared and the Taliban melted away, many choosing in traditional style to accommodate to the latest conquerors.

But Washington was desperate to find terrorists to crush. The strongmen they imposed as rulers quickly discovered that they could exploit Washington’s blind ignorance and attack their enemies, including those eagerly collaborating with the American invaders.

Soon the country was ruled by ruthless warlords, while many former Taliban who sought to join the new order recreated the insurgency.

The sledgehammer was later picked up by President Obama as he “led from behind” in smashing Libya.

In March 2011, amid an Arab Spring uprising against Libyan ruler Moammar Gadhafi, the U.N. Security Council passed Resolution 1973, calling for “a cease-fire and a complete end to violence and all attacks against, and abuses of, civilians.”

The imperial triumvirate – France, England, the U.S. – instantly chose to violate the Resolution, becoming the air force of the rebels and sharply enhancing violence.

Their campaign culminated in the assault on Gadhafi’s refuge in Sirte, which they left “utterly ravaged,” “reminiscent of the grimmest scenes from Grozny, towards the end of Russia’s bloody Chechen war,” according to eyewitness reports in the British press. At a bloody cost, the triumvirate accomplished its goal of regime change in violation of pious pronouncements to the contrary.

The African Union strongly opposed the triumvirate assault. As reported by Africa specialist Alex de Waal in the British journal International Affairs, the AU established a “road map” calling for cease-fire, humanitarian assistance, protection of African migrants (who were largely slaughtered or expelled) and other foreign nationals, and political reforms to eliminate “the causes of the current crisis,” with further steps to establish “an inclusive, consensual interim government, leading to democratic elections.”

The AU framework was accepted in principle by Gadhafi but dismissed by the triumvirate, who “were uninterested in real negotiations,” de Waal observes.

The outcome is that Libya is now torn by warring militias, while jihadi terror has been unleashed in much of Africa along with a flood of weapons, reaching also to Syria.

There is plenty of evidence of the consequences of resort to the sledgehammer. Take the Democratic Republic of Congo, formerly the Belgian Congo, a huge country rich in resources – and one of the worst contemporary horror stories. It had a chance for successful development after independence in 1960, under the leadership of Prime Minister Patrice Lumumba.

But the West would have none of that. CIA head Allen Dulles determined that Lumumba’s “removal must be an urgent and prime objective” of covert action, not least because U.S. investments might have been endangered by what internal documents refer to as “radical nationalists.”

Under the supervision of Belgian officers, Lumumba was murdered, realizing President Eisenhower’s wish that he “would fall into a river full of crocodiles.” Congo was handed over to the U.S. favorite, the murderous and corrupt dictator Mobutu Sese Seko, and on to today’s wreckage of Africa’s hopes.

Closer to home it is harder to ignore the consequences of U.S. state terror. There is now great concern about the flood of children fleeing to the U.S. from Central America.

The Washington Post reports that the surge is “mostly from Guatemala, El Salvador and Honduras” – but not Nicaragua. Why? Could it be that when Washington’s sledgehammer was battering the region in the 1980s, Nicaragua was the one country that had an army to defend the population from U.S.-run terrorists, while in the other three countries the terrorists devastating the countries were the armies equipped and trained by Washington?

Obama has proposed a humanitarian response to the tragic influx: more efficient deportation. Do alternatives come to mind?

It is unfair to omit exercises of “soft power” and the role of the private sector. A good example is Chevron’s decision to abandon its widely touted renewable energy programs, because fossil fuels are far more profitable.

Exxon Mobil in turn announced “that its laserlike focus on fossil fuels is a sound strategy, regardless of climate change,” Bloomberg Businessweek reports, “because the world needs vastly more energy and the likelihood of significant carbon reductions is ‘highly unlikely.'”

It is therefore a mistake to remind readers daily of the Nuremberg judgment. Aggression is no longer the “supreme international crime.” It cannot compare with destruction of the lives of future generations to ensure bigger bonuses tomorrow.

Noam Chomsky needs no introduction to our readers.

Liked it? Take a second to support TGP STAFF on Patreon!