India is not a Christian dominionist nation like America and most of the “West”, and it has some of the most advanced legislation protecting animals, but corruption and appalling poverty are endemic, and loopholes abound.

We offer two accounts of this terrible but inspiring instance of long-delayed animal liberation.

[W]hile we’re still mourning the loss of majestic Satao, in India, an emaciated begging elephant named Raju is giving the world something to smile about.

Raju was enslaved and used by a drug dealer for 50 years of his life. Piercing metal spikes penetrated his elephant flesh and shackled him for those 50 years. But Raju has gotten a second chance. His weeping tears during his rescue are giving the world a glimmer of hope.

Raju never had a normal life. As reported in The Independent, Raju’s life consisted of frequent beatings and intentional starvation to control him. The poor elephant often had to resort to consuming paper and plastic to fill up his large belly.

Raju the elephant was beaten, abused and forced to go hungry until animal charity workers rescued him last week

He was plucked from the wild by poachers as a baby. The calf’s life was riddled with many different owners — possibly, as many as 27 — who probably weren’t too concerned with his welfare.

The last owner was one of the worst. The drug dealer exploited Raju daily by parading him around for tourists in the streets of Allahabad. He also preyed on religious pilgrims claiming that Raju would bless them for a price. The elephant’s tail was practically hairless since his owner would rip his hair and market it a type of good luck charm.

Raju never had a home, or anything close to the bond of a herd. Even during India’s blazing summers, he lived chained outside with no shelter. It’s a miracle that he survived so long. 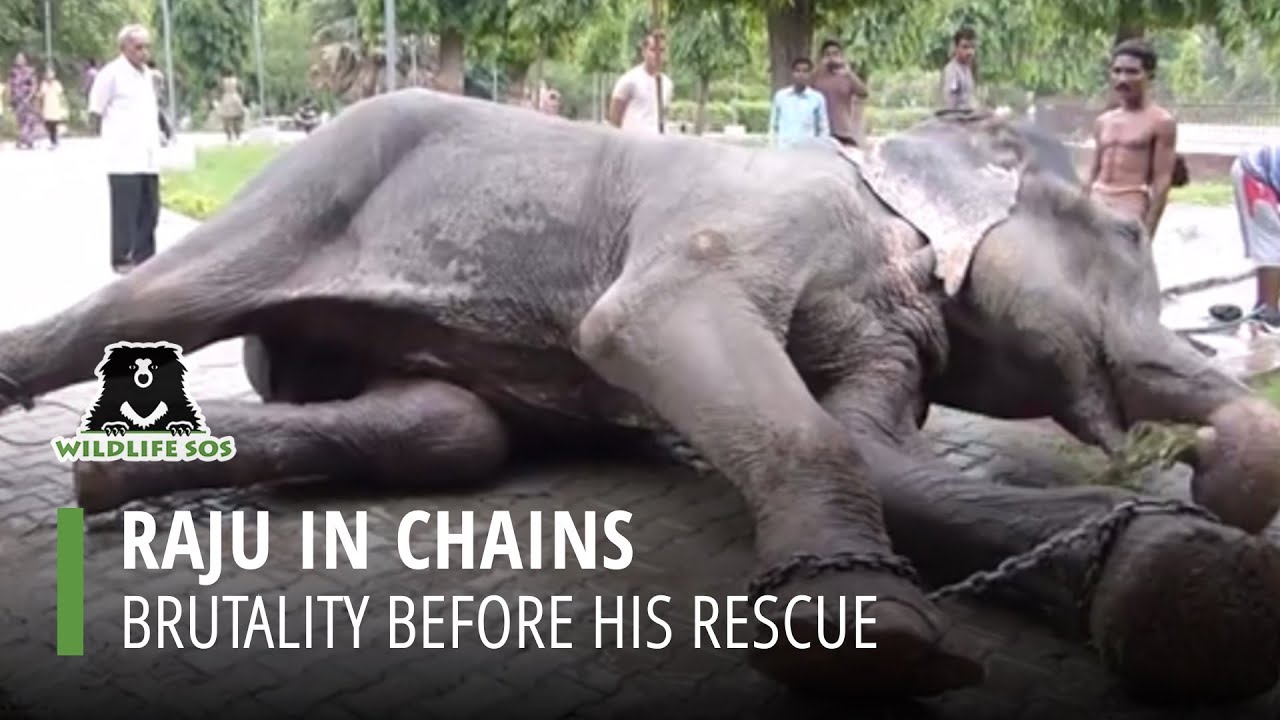 He probably wouldn’t have made it much longer without the help of Wildlife SOS charity.

The starving and aging elephant lived in constant pain. Imagine what having spikes penetrating your flesh every second would feel like for 50 years? Raju had abscesses, wounds (from the spikes and the spear that was used to dominate him) and chronic arthritis. Every step Raju took was accompanied by oozing pus from his wounds as the spikes dug deeper into his flesh.

Raju also had a type of pain that we may not scientifically understand — a broken spirit.

The elephant was very distrusting of humans because he mostly knew human brutality. His rescuers worked tirelessly to gain his trust. Fruit and positive encouragement eventually got him into the van destined for an elephant sanctuary and a life of freedom.

As reported in Mirror Online, the co-founder of Wildlife SOS, explained that the drug dealer vehemently tried to stop the rescue operation; he put even more chains on Raju, he tried to block them from reaching Raju and he tried to get the bull to charge his rescuers with verbal commands. But Wildlife SOS rescuers were determined to save the elephant.

Satyanarayan describes the beautiful moment: “We stood our ground and refused to back down – and as we did so, tears began to roll down Raju’s face. Some no doubt were due to the pain being inflicted by the chains, but he also seemed to sense that change was coming. It was as if he felt hope for the first time in a very long time.”

We’ll never be sure what exactly Raju felt. I’m sure that he felt something. I’m not trying to solely anthropomorphize Raju. According to PBS, elephants lead rich emotional lives. There are numerous anecdotes documenting elephant joy, love, grief, rage, stress, compassion and altruism.

Raju’s first steps as a free elephant were on the American Independence Day holiday. The exhausted and teary-eyed team worked for 45 minutes to remove every spike chain. Raju was then taken to a pen to receive medical care, but he will join two other sanctuary elephants, who are also victims of human brutality, soon. 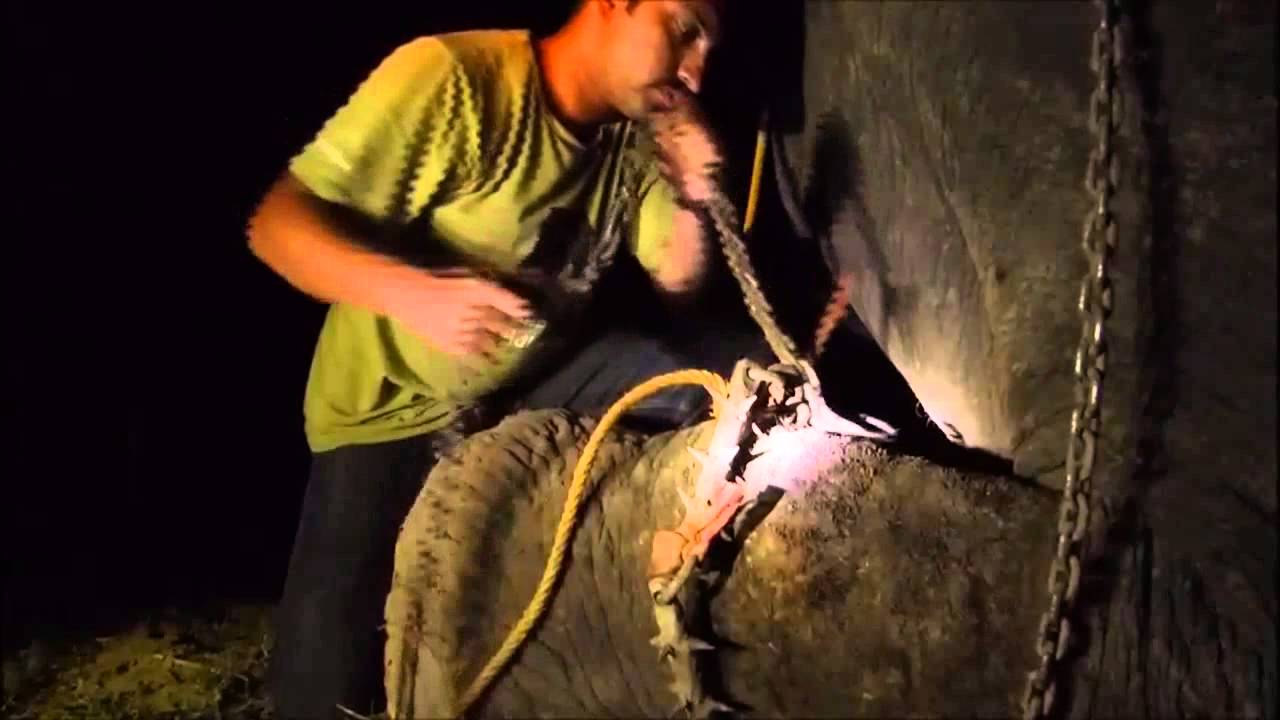 Raju is one of the lucky ones. Indian elephants are the victims of overwhelming cruelty. As reported in USA Today, not even Paul McCartney’s starpower has saved Sunder, an abused 14-year-old elephant. In 2012, McCartney shared the elephant’s predicament, and the Indian government agreed to release Sunder to the wild. Fast-forward to 2014, news broke that a local politician took the elephant to his home and shackled him to a shed instead, much like Raju.

Help Animals India covers the extent of this cruelty. In India, an estimated 4,000 captive elephants endure lives of poor housing, undernourishment and starvation, water scarcity, over and under physical activity, punishment-based training that beats them into submission and a life of loneliness.

Raju’s drug dealing owner might have promoted the elephant as lucky and blessed, but Raju truly is. He is one of 4,000 elephants. Fortunately, Raju’s abscesses, wounds, long nails, overgrown footpads, arthritis and constant pain can be treated, or, at best, managed. His spirit may take some time, but, to me, elephants are capable of more love, compassion and forgiveness than most people.

These incredible pictures show the moment an elephant who was held in chains and beaten and abused for fifty years cried as he was released to freedom.  Raju the elephant was left bleeding from spiked shackles and living on hand-outs from passing tourists after he was captured and tied up by his ‘owner’.

But, after 50 years of torture, the animal cried tears of relief after he was rescued by a wildlife charity in a daring midnight operation — fittingly on American Independence Day.

North London-based charity Wildlife SOS stepped in to save Raju from dying in his bonds after learning of his plight in India.

Every day, the majestic animal was forced to hold out his trunk and beg for a few coins from passers-by — surviving only on plastic and paper for food.

However, last week, a 10-strong team of vets and wildlife experts from the charity were joined by 20 forestry department officers and six policemen to seize Raju from his suffering in the Uttar Pradesh area of India.

The mission took place under the cover of darkness, as fewer people would be around for the dangerous rescue and the animal could be protected from the searing heat of the sun.

Pooja Binepal, the charity’s UK spokesman, described the rescue as ‘incredibly emotional’ for the team.

She said: ‘Raju has spent the past 50 years living a pitiful existence in chains 24 hours a day, an act of intolerable cruelty.

‘The team were astounded to see tears roll down his face during the rescue. It was so incredibly emotional for all of us. We knew in our hearts he realised he was being freed.

‘Elephants are not only majestic, but they are highly intelligent animals, who have been proven to have feelings of grief, so we can only imagine what torture half a century has been like for him.

‘Until we stepped in he’d never known what it is like to walk free of his shackles — it’s a truly pitiful case.

‘But today he knows what freedom is and he will learn what kindness feels like and what it’s like to not suffer any more.’

The daring rescue came exactly a year to the day since the charity was alerted to Raju’s plight by the Uttar Pradesh Forest Department in India.

A confiscation process went through the courts as Raju’s owner did not have any legal documents for his possession meaning the charity could rescue him from suffering.

It is not known exactly how Raju came into his plight, as little is known about his early years, but the charity believes he was poached from his mother as a young calf.

Ms Binepal said: ‘The poachers either slaughter the mother, or they drive the herd into traps that are small enough only for the babies to fall into. The mother cries for her baby for days after he’s been stolen — it is a sickening trade.

‘The calves are then tied and beaten until they submit to their owners — their spirits are effectively broken.

‘He’d been poached as a calf and then he has been sold on and sold on. Incredibly we believe he has had up to 27 owners — he’s been treated as a commodity every two years of his life.

‘By the time we found him in July 2013 he was in a pathetic condition. He had no shelter at night, and was being used as a prop to beg from dawn until dusk from tourists visiting the sites of India.

‘He hasn’t been fed properly and tourists started giving him sweet food items and because he was in a state of hunger and exhaustion he began eating plastic and paper.

‘His nails are severely overgrown, he has abscesses and wounds because of the shackles and continually walking on a tarmac road has led to his foot pad overgrowing.’

Once the court order was finally issued, a team led by Wildlife SOS founder Kartick Satyanarayan carried out two days of surveillance before launching the rescue.

Mr Satyanarayan said: ‘As we watched we quickly realised we had to act as quickly as possible as his situation was so desperate and the cruelty so extreme so we decided to move the rescue forward by a day.

‘The chains around his legs had spikes which were cutting into his flesh — and each time he moved puss would ooze out of wounds. Pain and brutality were all he knew.

‘His cruel handler even tore out the hair from his tail to sell as good luck charms. The exploitation and abuse just had to stop.’

However, even on Thursday evening as the mercy mission began, Raju’s owner tried to prevent his rescue.

Mr Satyanarayan said: ‘He began to shout commands to terrify Raju — and try to provoke him.

‘It created an incredibly dangerous situation as a bull elephant could snap a human like a tooth pick if he becomes afraid or angry.