The CIA spying scandal and the disintegration of American democracy 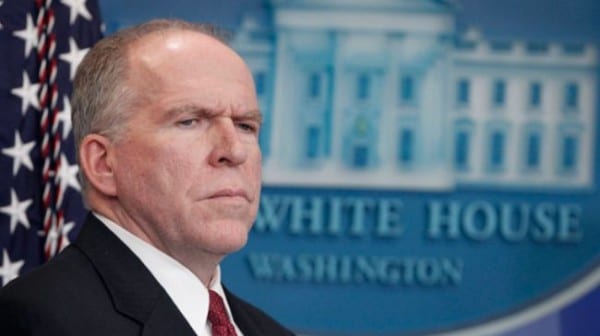 Brennan: Fox in the chicken coop. Perfect foil for a pretend democracy.

[L]ast Thursday, the US Department of Justice quietly announced that it would not launch a criminal investigation following the revelation in March that the Central Intelligence Agency (CIA) had spied on the staff of the Senate Intelligence Committee. News of this decision—which concerns one of the most significant constitutional breaches in modern American history—was barely reported in the establishment media and prompted no significant response from any section of the political establishment.

The Obama administration’s decision and the acquiescence of the rest of Washington underscore the reality, behind the trappings of democracy, of de facto rule by an unelected and authoritarian military-intelligence apparatus. The military and intelligence agencies that preside over a vast global enterprise of violence and deceit operate in secret without any accountability or restraint, no matter which party controls Congress and the White House.

Obama himself—whose first job after graduating from college was as an analyst at Business International Corporation, an institution with well-documented CIA connections—functions in practice as a front man for the military and intelligence bureaucracy. Just last week he responded to the crisis in US-German relations triggered by the revelation that the CIA had recruited operatives to spy on the German Secret Service by declaring he had no knowledge of the CIA operation, raising the question of who runs the country. (See: Obama and the CIA—who runs Washington? )

Obama elevated John Brennan, who presided over the illegal spying on Congress, to head the CIA. As a high-level CIA official in the Bush administration, Brennan had defended the use of “enhanced interrogation techniques” (i.e., torture) against people accused of being terrorists.

Obama himself, from the moment he took office, worked to shield Bush-era criminals from investigation or prosecution.

The CIA’s spying on Congress is a flagrant violation of the US Constitution’s bedrock principle of separation of powers. As American high school students were once taught in civics classes, the basic theory of American constitutional government is that tyranny can be prevented only by dividing state power among three independent branches—the legislature, executive, and judiciary—each with its own limited powers regulated by a system of checks and balances.

The CIA spying scandal is particularly striking because the CIA’s target is not just any congressional committee—but the very Senate committee charged with oversight of the CIA.

The scandal has its origins in a congressional investigation into a CIA torture program that existed from 2002 to 2009, as well as efforts by the Bush administration to cover up the CIA’s criminal practices. As part of the program, the CIA abducted individuals and “rendered” them to overseas CIA “black sites,” where they were subjected to torture. One of the issues in the Senate Intelligence Committee probe is the CIA’s destruction of video tapes of water-boarding and other forms of torture.

The Senate committee has prepared a 6,300-page draft report regarding the program, but the CIA, backed by the Obama White House, has thus far blocked its release on the grounds of “national security.”

In the course of the Senate investigation—despite the CIA’s insistence that documents could be made available to the committee only at a specially constructed facility at its headquarters in Langley, Virginia—Intelligence Committee staffers came into possession of documents prepared for former CIA Director Leon Panetta. The documents show that CIA officials systematically lied to Congress in the course of its investigation.

The CIA’s response was to hack into the staffers’ computers, ostensibly to determine how the documents had come into their possession, and to attempt to delete the files.

Dianne Feinstein, a California Democrat and chairman of the Senate Intelligence Committee, learned of the breach in January of this year, but she attempted to settle the matter without informing the public. CIA Director Brennan took the position that the CIA was only responding to unauthorized access of its classified records. According to Brennan, the CIA has the right to conceal documents from the congressional committee tasked with overseeing it. Brennan’s position raises the obvious question: if the Senate Intelligence Committee is not entitled to know what the CIA is up to, then who is?

It was only when Brennan signaled that he would ask the Justice Department to launch a criminal investigation of the staffers who had obtained the documents that Feinstein took to the Senate floor in protest in March. Feinstein directly accused the CIA of violating the constitutional principle of the separation of powers, as well as “the Fourth Amendment [which prohibits warrantless searches and seizures], the Computer Fraud and Abuse Act, as well as Executive Order 12333, which prohibits the CIA from conducting domestic searches or surveillance.” At the time of the speech, Feinstein recommended that the Justice Department launch a criminal investigation against the CIA.

While Feinstein’s speech outlined grave violations of law—warranting, at the very least, impeachment proceedings—no serious measures were ever subsequently proposed or considered. The Obama administration responded to the conflicting requests for criminal prosecution by promising it would look into both. Then the issue was completely dropped—by Feinstein and the Senate, the media and the politicians of both parties.

Now, four months later, the administration announces that there will be no investigation. The response of Feinstein, a slavish defender of the intelligence agencies, including the NSA and its mass spying programs, was to praise the Justice Department’s decision not to pursue the matter.

The episode underscores the prostration of Congress, the presidency, the courts, and the entire federal bureaucracy before the military-intelligence apparatus, which has mushroomed far beyond anything President Eisenhower could have imagined when he issued his famous warning against the “military industrial complex” in 1961.

In 1929, Leon Trotsky explained that the rise of dictatorial tendencies in Europe reflected the breakdown of democratic forms of rule under conditions of heightened class tensions as well as sharpening conflicts among the imperialist powers. “By analogy with electrical engineering,” he wrote, “democracy might be defined as a system of safety switches and circuit breakers for protection against currents overloaded by the national or social struggle. No period of human history has been—even remotely—so overcharged with antagonisms such as ours … Under the impact of class and international contradictions that are too highly charged, the safety switches of democracy either burn out or explode. That is what the short circuit of dictatorship represents.”

The CIA scandal represents the burnout of just such a democratic circuit breaker, under conditions of a toxic combination of militarism abroad, growing social inequality at home, and the rise of a criminal and unaccountable financial aristocracy.

Nearly 15 years have passed since the stolen election of 2000. That irrevocable break with constitutional procedures was followed by 9/11 and the declaration of the “war on terror”—a political fraud used to justify endless wars overseas and the destruction of democratic rights within the US.

The intervening years have seen the growth of unbridled state spying on the personal, political and social activities of the American people; the assassination of US citizens and thousands of “targeted killings;” rendition, torture and indefinite detention. Now the entire political establishment acquiesces in the trampling of the Constitution by the government’s military-intelligence apparatus.

The disintegration of American democracy is a product of the intractable crisis of American and world capitalism. The ruling class can no longer accept the restraints imposed by its own laws. It lives in mortal fear of the social implications of its own reactionary and rapacious policies.

The working class must halt the drive to dictatorship and defend its democratic and social rights by mobilizing itself as an independent political force in the struggle for socialism.

Tom Carter is a political observer with wsws.org, organ of Social Equality Party.

The toxic crisis of Israeli society