Home ABOMINATIONS Maureen and Barry: About The World’s Most Important Spectator

Maureen and Barry: About The World’s Most Important Spectator 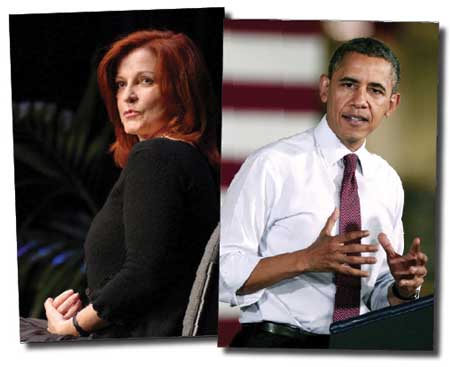 [M]aybe it was the front page piece in the N.Y. Times headed “Obama Is Seen as Frustrating His Own Party” that set off its liberal, acerbic, consummate Washington insider columnist Maureen Dowd to let Obama have it. The article portrayed a deeply annoyed Sen. Harry Reid, a strong Obama backer, being put off by the President when he asked for help in getting Republican Sen. Mitch McConnell to confirm his many unconfirmed ambassadorial candidates. Obama was, typically, unmoved. “Coolly,” the Times reported, he backed away, telling Reid, “You and Mitch work it out,” as if he hadn’t noticed congressional paralysis and partisan bloodletting.

That’s Obamaspeak as we now know him six years after he first arrived. “The World’s Most Important Spectator” David Bromwich of Yale dubbed him in the London Review of Books. “Barry is bored” ran a sub-head to Dowd’s angry, almost saddened column, Reflecting what has become a mantra among disenchanted, once impassioned, Obama liberals and moderates, she wrote, “The man whose singular qualification was as a uniter turns out to be singularly unequipped to operate in a polarized environment.”

Like the rest of us disappointed Obama voters, the President once represented a powerful and invigorating counter-reaction to the appalling ineptitude of the Bush Administration, its chest-thumping neocon chickenhawks not to mention Cheney and Rumsfeld.

We hoped and believed that he would be different. The hundreds of thousands who greeted him in Chicago’s Grant Park and the 1.5 million moved by his first inauguration were ecstatic with anticipation. We ditched our skepticism about politicians and instead fantasized about a second coming of FDR’s One Hundred Days and awaited Change from our new Man From Illinois.

What happened? Barack Obama happened. More eloquence than substance happened. More political caution than audacity and hope. Chump change for the corrupt big bankers rather than jail time and abandoning the millions maimed by their financial shenanigans. Assailing investigative reporters like the Times’ James Risen, now threatened with possible jail time for refusing to reveal a source the administration would love to send to prison, Relying on the antiquated Espionage Act of 1917 to pursue whistleblowers— bringing more cases than every other administration in history combined—and instituting the incredibly invasive Insider Threat Program, whereby federal employees and contractors are required to watch out for and report suspicious persons. “Those who fail to report them,” said the McClatchy Newspapers, “could face penalties, including criminal charges.”

Of course, it’s unfair to blame Obama for all our troubles abroad. Some regions like the Middle East have no rules, their societies are often broken, and religious fanaticism runs wild. No amount of U.S, military or money might can change that. Still, Guantanamo as promised is still open, holding some prisoners guilty of nothing more than being in the wrong place. The initial scheme to drop a few bombs in Assad’s backyard was inane and Putin of all people helped him come to his senses (did he come to his senses or was it merely the pragmatic, expedient thing to do in face of the world’s hostile reaction?—Eds). Some alleged subordinates in the State Department include some of Cheney’s people. The neocon Victoria Nuland may or may not have done anything to exacerbate the Ukrainian mess but she and others seem to be operating as lone wolves. Does Obama even care? Supported by his poll-counters, at some point the liberaloid and untested Obama became part of an invented and make-believe center, occasionally throwing a bone to those of us on the left.

“Why doesn’t he do something bold and thrilling” Dowd virtually shouts. “Get his hands dirty? Stop going to Beverly Hills to raise money and go to St. Louis to raise consciousness. Talk to someone besides Valerie Jarrett.”

It’s quite possible that future historians, memoirists and biographers will see him in a different light, more nuanced, smarter and more understanding than all of us. Certainly he’s despised by our many racial bigots. But six years in, while most problems are so complex they defy simple, easy solutions, he’s still our President. For two more years.

So here, now, is Dowd’s kicker: “The sad part is that this is an ugly, confusing and frightening time at home and abroad, and the country needs its president to illuminate and lead, not sink into some petulant expression of his aloofness where he regards himself as a party of his own and victim of petty, needy, bickering egomaniacs.”
Pity.

Murray Polner is a book review editor for HNN.org and was editor of Present Tense, published by the American Jewish Committee from 1973-90. He wrote Rabbi: The American Experience; co-edited (with Stefan Merken) Peace, Justice, and Jews: Reclaiming Our Tradition, as well as No Victory Parades: The Return of the Vietnam Veteran and, with Jim O’Grady, Disarmed & Dangerous, a biography of Daniel and Philip Berrigan. His most recent book is We Who Dared to Say No to War: American Antiwar Writing From 1812 to Now, co-authored with Thomas Woods.

This is the Way the World Ends