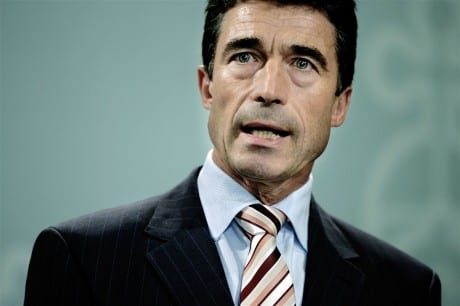 Anders Fogh Rasmussen, a career Danish politician, epitomizes Europe’s abject subservience to America’s imperial policies, and the sheer corruption of European leadership, and especially the downfall of Scandinavia as a bloc of independent, progressive nations. This is the same fellow to midwifed the rape and murder of Libya. Criminals like these involve the world in major catastrophes. But always remember the puppet masters are in Washington.

[T]he US and European powers are stepping up their reckless military escalation against Russia, citing the crisis in Ukraine and Russia’s annexation of Crimea as a pretext to deploy troops to new bases throughout Eastern Europe.

Ahead of next week’s NATO summit in Cardiff, NATO chief Anders Fogh Rasmussen bluntly accused Russia of destabilizing eastern Ukraine and all but threatened Russia with war. According to the Guardian, he indicated that the NATO summit would agree to “new deployments on Russia’s borders—a move certain to trigger a strong reaction from Moscow.”

Rasmussen explained, “We will adopt what we call a readiness action plan with the aim to be able to act swiftly in this completely new security environment in Europe. We have something already called the NATO response force, whose purpose is to be able to be deployed rapidly if needed. Now it’s our intention to develop what I would call a spearhead within that response force at very, very high readiness.” This would “involve the pre-positioning of supplies, of equipment, preparation of infrastructure, bases, headquarters. The bottom line is you will in the future see a more visible NATO presence in the east.”

NATO’s base on the Baltic Sea coast in the Polish city of Szczecin is likely to be the hub for the new deployments.

NATO’s decision to deploy troops in Eastern Europe blatantly violates promises made by numerous Western officials to the USSR during the process of German reunification in 1990. Then-US Secretary of State James Baker, for instance, pledged that there would be “no extension of NATO’s jurisdiction for forces of NATO one inch to the east” after the Soviets agreed to let a reunified Germany join NATO.

Diplomatic and military sources also reported that two NATO warships will enter the Black Sea next week. “Two NATO warships at once will arrive in the Black Sea on September 3. They are the US Navy’s destroyer USS Ross and the frigate Commandant Birot of the naval forces of France,” an unnamed source told RIA Novosti news agency.

To fund their confrontation with Russia, NATO powers are also discussing a massive increase in military spending, which could only be funded by carrying out deep social cuts against the working class. “Since the end of the cold war we have lived in relatively good weather,” Rasmussen said. “Now we are faced with a profound climate change. That requires more investment. Politicians have tried to harvest the peace dividend after the end of the cold war. That’s understandable. But now we are in a completely new security situation.”

Former NATO supreme commander General Sir Richard Shirreff also said that European nations had to put their “hands in their pockets to spend more money on defence.” He added that the “security framework” in Europe had changed as a result of Russia’s annexation of the southern Crimean peninsula from Ukraine in March.

The warmongering propaganda of the NATO powers stands reality on its head. In fact, it is NATO that stirred up conflict in Ukraine, backing the fascist-led coup that ousted pro-Russian president Viktor Yanukovych in February. The aim of the US and its European allies is to turn Ukraine into a forward operating base, threatening war with Russia, a nuclear-armed power.

In an extraordinarily reckless move, NATO is preparing to unofficially but effectively bring Ukraine into the NATO alliance, using it as a proxy force to threaten Russia. Ukrainian president Petro Poroshenko will be the sole non-NATO head of state attending the NATO summit next week. According to theGuardian, “Four ‘trust funds’ are to be established to finance Ukraine’s military logistics, command and control structures, and cyber defences, and to pay the armed forces’ pensions.”

Rasmussen said, “It is actually what we will decide to do at the summit, to help them build the capacity of their security sector, modernise it.”

It appears that this policy is being pursued despite significant internal opposition inside NATO, which is rarely reported in the major media and never in detail.

Although the European powers backed the fascist coup in Kiev, some reportedly oppose setting up permanent bases in Eastern Europe, fearing this will hurt Europe’s economic ties with Russia. According to the Guardian, “The French, Italians and Spanish are opposed while the Americans and British are supportive of the eastern European demands. The Germans, said a NATO official, were sitting on the fence, wary of provoking Russia.”

The Kremlin, for its part, is taking an accommodating position to the Western powers in Ukraine, effectively recognizing the Western puppet regime in Kiev by holding its first direct negotiations with it.

On Tuesday, Poroshenko and Russian President Vladimir Putin held talks in Minsk after both attended a meeting among the Russian-led Eurasian Customs Union, the European Union and Ukraine. Though it was reported that both countries are working for a peace plan, no agreement came out of the summit.

Belarusian President Alexander Lukashenko told reporters the talks at the summit were “tough,” but avoided saying that they had failed. He said, “Sadly, the situation there [in Ukraine] has gone so far that in the absence of agreements in principle, any steps or technical accords are not going to lead to settlement.”

Putin said, “Not all of our arguments are accepted by our colleagues, but at least we were heard and we have agreed to intensify the exchange of views, and try to find some solutions,” adding that in the absence of a final agreement Russia will have to “take measures” to protect its economy.

However, Putin called the meeting with Poroshenko “positive,” while Poroshenko called it “very complicated and difficult.”

Putin’s main concern seems to be to leverage his role as the EU’s energy supplier to reach some sort of deal, asserting that the two sides “have also agreed that a resumption of gas and energy talks is urgently needed.”

As NATO escalates its military threats against Russia, fighting between pro-Russian rebels and the Ukrainian army and its allied fascist paramilitary units is continuing in eastern Ukraine.

The area around the city of Novoazovsk, strategically positioned on roads linking Russia with Crimea, which Moscow annexed in March, has come under heavy artillery firing in the past days. Novoazovsk lies on the Azov Sea on the road that runs from Russia to the major Ukrainian port of Mariupol and west to Crimea.

The fighting in eastern Ukraine has killed over 2,249 and wounded 6,033, according to the United Nations. The flood of refugees has now reached crisis proportions, with 190,000 internally displaced Ukrainians and 207,000 seeking refuge in Russia.

On Monday, a Ukrainian official said a column of Russian tanks and armoured vehicles entered southeastern Ukraine. The Kiev government said it captured 10 Russian soldiers around Amvrosiivka, a town near the Russian border. Later, Moscow admitted that they were Russian soldiers patrolling the border, claiming that they probably crossed it inadvertently.