We have been asked to distribute this antiwar, anti-imperialism letter and, agreeing with the important truths contained herein, we are glad to comply. Readers who wish to sign the letter, may do so at http://dearputin.com—The Editors 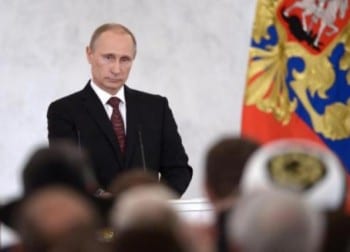 [P]lease accept our apologies for the behavior of our Governments and Media. Western Nations, led by the United States, seem determined to start a war with Russia. A sane person would recognize the terrible consequences of such a war and would do everything in their power to avoid it. In fact it appears that this is exactly what you are doing. In the face of an endless stream of lies and provocations you have managed to keep Russia from being drawn into a nuclear war.1, 2

Events surrounding the war in Ukraine are twisted to represent you as an aggressor when the facts clearly show otherwise. Neo-Nazi gangs commit atrocities against the citizens of Novorussia on a daily basis and they receive political and financial support from Western governments. The Ukrainian army has attacked Russian checkpoints and towns and regularly bombs refugees attempting to flee the country. Russia was blamed for the destruction of Malaysian Airlines flight MH17, even though the evidence suggests that the flight was shot down by the Ukrainian army. You offer humanitarian aid to the people of Luhansk and you are accused of smuggling weapons into Ukraine.3

Why are you the target of these lies and provocations? The pathological criminals of the West are pushing for war with Russia because they need an external enemy. As long as the people are focused on “Russian aggression” they remain unaware of those truly responsible for the decline of the American economy and social system. In Europe, with its history of brutal wars sparked by arrogance and greed, European leaders have undergone a complete moral collapse and have naively fallen into line behind the USA’s policy of imperial aggression. The last great president of the United States, John F Kennedy, described our common enemy in 1961:

We are opposed around the world by a monolithic and ruthless conspiracy that relies on covert means for expanding its sphere of influence–on infiltration instead of invasion, on subversion instead of elections, on intimidation instead of free choice, on guerrillas by night instead of armies by day.

It is a system which has conscripted vast human and material resources into the building of a tightly knit, highly efficient machine that combines military, diplomatic, intelligence, economic, scientific and political operations… Its preparations are concealed, not published. Its mistakes are buried not headlined. Its dissenters are silenced, not praised. No expenditure is questioned, no rumor is printed, no secret is revealed.4

Since that time the government of the United States and other Western nations have been infiltrated by this “ruthless conspiracy”. While it is not necessarily unified we believe that its leaders think and act without the burden of a normal human conscience. This is why they are willing to sacrifice the lives of millions or billions of people. They supply Israel with weapons that are used for the wholesale slaughter of thousands of Palestinians. They militarize police in places like Ferguson, MO to protect and strengthen their power over the people. They lie to start wars that take the lives of millions of people to increase their political power. They are despicable.5, 6

Like JFK, you have a military background, so you are bound by a sense of duty to protect and serve the people of Russia. It appears that like him you recognized the madness of nuclear war and have turned towards peace.7 You refuse to endorse the American empire and you are working to undermine its power without engaging in direct military conflict. Instead Russia has developed closer relationships with many countries through organizations like BRICS, has forgiven old debts and worked with its partners to meet goals that serve the interests of the people. The idea of international partnerships has been called a multipolar approach and it contrasts sharply with the unipolar, imperialist policies of the US where all countries’ resources are controlled to benefit a powerful few–and at the expense of We the People.

We reject the greed, hatred and lust for power displayed by our “leaders”. We are outraged and horrified by the killing of millions of innocent people in the name of freedom and self defense. We want peace and justice for all people. We want a real and lasting peace, the kind of peace that JFK once spoke of:

What kind of peace do we seek? Not a Pax Americana enforced on the world by American weapons of war. Not the peace of the grave or the security of the slave. I am talking about genuine peace, the kind of peace that makes life on earth worth living, the kind that enables men and nations to grow and to hope and to build a better life for their children–not merely peace for Americans but peace for all men and women–not merely peace in our time but peace for all time.8

True peace and justice are impossible as long as the “ruthless conspiracy” rules the United States and other nations from the shadows. We pray that through our mutual efforts we may defeat the power-hungry and ruthless criminals who seek to enslave us all. We pray that we may instead foster a genuine peace that makes life on Earth worth living.