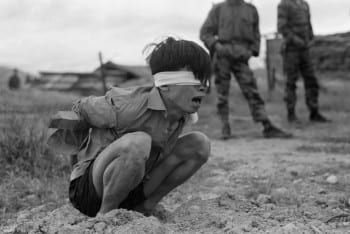 Vietnam: US prisoner. Better not ask about the fate of this prisoner. (click to enlarge)

[I]t amazes us that anyone who lived through Viet Nam could ever support another war.

Those of us in the streets during the Viet Nam era were keenly aware that the US government was propping up a military dictatorship in South Viet Nam, which was the product of French colonialism. 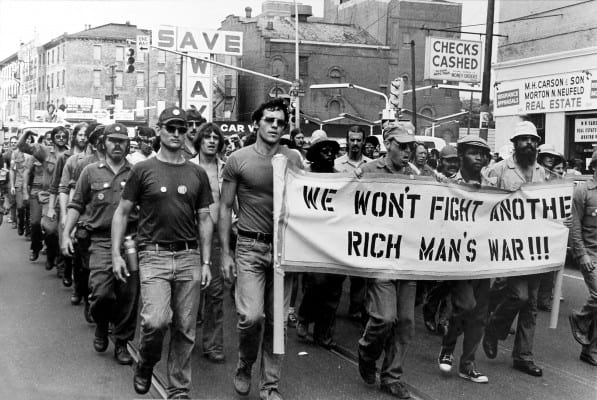 Colonialism, primarily a European atrocity for the past 600 years, has been visited upon people in Africa, Asia, and in North and South America. To draw up just a quick sketch:

The English brutalized India, the West Indies, and much of Africa;
The Dutch: South Africa and Indonesia;
The French: Algeria, Tunisia, many parts of Africa, too, and Indochina; The Belgians: the Congo;
Spain: most of the Americas and the Philippines;
Portugal: Brazil and parts of the Indian subcontinent and the Pacific.

Colonialism, under any pretext, is a pernicious, evil concept that allows for the subjugation of native peoples, the rape of the environment, the plunder of natural resources, and the dehumanizing of both colonialist and colonialized.

The horrors of the Vietnam war were broadcast into our living rooms nightly—albeit with the actual historical and political context carefully decapitated.

Colonialism was at its height in the 18th and 19th Centuries, and continued into the 20th. Its current iteration is one of international corporations acting like the nationalist despots of the past, but is no less brutal, uncaring, and felonious.

Most of history is the story of one people or nation killing and conquering other people. The US is no different, although our educators and politicians learned early to put happy faces on the brutality and corruption of US foreign policy and military adventurism.

Capitalist propaganda and disinformation persuaded the American public to support one war after another, always being told it was in the American self interest to kill some potential enemies.

And until Viet Nam, most Americans bought into the propaganda. Viet Nam disabused many of us of the notion that America was right and pure of motive.

The horrors of that war were broadcast into our living rooms nightly—albeit with the actual historical and political context carefully decapitated. As a result a huge number of Americans were able to carry on with their daily business paying little attention to the war. Ignorance is bliss and few nations are or have ever been as blissful as the United States.

Wanna know where most of the PTSD syndrome comes from? It comes from bewilderment and shame at atrocities witnessed or committed. It is stubborn, badly repressed decency haunts these men with a nagging conscience.

But, eventually, partially as a result of these images, and also as a reaction to the draft, many students, parents, minorities, and advocates for peace swarmed into the streets to protest the war. In Indochina, at unthinkable cost in blood, the Vietnamese patriots were pushing the brutal foreign occupation machine out.  Eventually they did.

Was anything learned? We thought we would end war. We thought an all volunteer army would prevent military adventurism. What we got was a class of professional mercenaries recruited from the most impoverished American families, all ready to do the bidding of the friendly fascist state. This new class of military is ruthlessly exploited by the ruling elites, while their morally dubious deeds are continually hailed as work of selfless heroes by an utterly prostituted media and an even more prostituted

Meanwhile, the American state has been hard at work devising new ways to minimize actual casualties, not out of concern for the people in uniform, but to keep the absent-minded folks at home from suddenly raising serious objections to its criminal meddling around the world.  The long-distance drone, a remote-killing machine that represents the ultimate in dehumanized “deletion” of any enemy target. along with similar technologies are part of this new military posture.

In part this is because Americans have gotten accustomed to smashing other peoples’ homes while suffering comparatively very few casualties in their own ranks. This reflects the advanced weapon to human ratio in the American military mix.

The “right” to invade and destroy for our own self-righteous reasons is so deeply implanted in the American mind and so unquestioned, that in Vietnam many of our GIs were almost shocked when the Vietnamese dared to fight back. That reaction was extreme among air force guys, whose training included “safe runs” in the Delta where there was no real foliage and anything could chosen as a target for obliteration. Countless animals and people were shot or bombed to pieces just for the hell of it. As Philip Slater acidly relates in his classic, The Pursuit of Loneliness (1),

American pilots were most anxious to bomb North Vietnam until they had actually experienced the ground fire, at which point their motivation lessened markedly…It became difficult, in fact, to man these missions.

Killing in a dubious war is apparently much more palatable than getting killed, and Americans are not used to fighting with anything approaching equal odds (imagine our outrage if the North Vietnamese bombed us back).

In the Delta, pilots seem surprised and almost indignant when their massive weaponry is countered with small-arms fire. One pilot, asked if he had killed anyone on a mission, replied: ” Yeah, thirty, maybe forty…Those little mothers were shooting back today, though.” We are reminded of the old French chestnut: 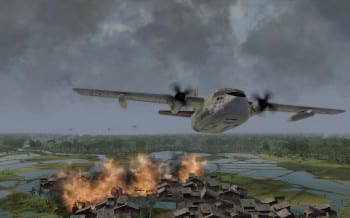 Bomb and strafe mission in Nam: kill anything that moves. (Click to enlarge)

If people around the world were to realize that their children are just like everyone else’s children, the imperative to kill other people’s children would vanish.

Instead, xenophobia, cheap patriotism, myopic self-interest, fear, and ignorance drive us to send other people’s kids to war to kill the kids of still other people.

And a huge number of the victims of war are animals. Animal deaths from war are often hundreds of times the human toll. They are bombed, burned, shot, poisoned, starved and poisoned through chemical defoliation, used as target practice, or suffer other unimaginable torments due to human stupidity, innate cruelty, and greed.

Meanwhile, children are killed, maimed, and scarred for life. In modern wars all in service to capitalism.

If we had the power, we would make the leaders of the country go fight.

We’d make the boards of directors of the death industries be the first on the ground in any conflict.

And we would urge our fellow Americans to value the lives of our children more than the so-called “pride of the nation”. Which is not patriotism proper, but unthinking jingoism on steroids.

Sadly, war will continue as long as capitalists run the country and the world.

War is highly profitable. And almost without competition. The carefully masked fascist war machine already controls the US government, it has already bribed government officials. The payoff comes with every new plane, ship, bomb, missile, mortar, gun, and bullet ordered by the military. Not to mention unlimlited access to the US treasury.

The enemies of war are the people who value the lives of everyone’s children, their own lives, and the lives of animals, and the destiny of this planet—our only home. Precious as they are, they have no place in the current capitalist paradigm.

Yet they are the future of mankind.

They are the revolutionaries.

But to liberate themselves they need to learn the truth about their condition, no easy thing given the scandalous conditions of propaganda that control the American public mind. Only then will they be able to put things in perspective, and push back against the death-dealing, mendacious system that immiserates and consumes their lives and those of untold millions around the world, including innocent animals and a hitherto largely defenseless nature.

Roland Vincent serves as special editor for ecosocialist and animal rights matters. Patrice Greanville is Editor in Chief of the Greanville Post.

Poroshenko’s speech in front of the Imperial Senate (MUST WATCH!)

A simply terrific but I imagine uncomfortable article to read by Vets who never quite decided which way they felt about their participation int his or other imperial wars. I especially like your allusion to the way we have become accustomed to waging war “on the cheap”!

Drones (besides nukes) are the ultimate dehumanizing machine, making killing even more abstract and removed from even basic moral pangs. Perfect weapon for a corrupt, ruthless empire which is nothing but an empty vessel, a criminal robot, sailing into perdition with all of us aboard.

Thank you for a courageous article.

W.F. Jameson
Brooklyn
(NOTE: The writer is a Vietvet).