“The basic Too Big to Prosecute idea was clearly in Holder’s head long before Dyson’s ‘racial realpolitik’ might have come into play.” 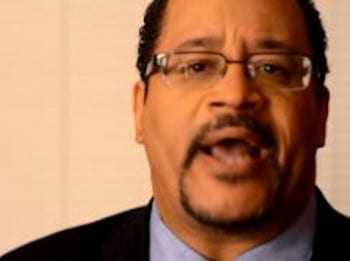 Dyson’s following apology for Holder was recently heard on the liberal-left television show Democracy Now [5], where Dyson has regularly appeared in the Age of Obama, sadly enough:

“If we’re going to talk about this in the actual political context, the kind of racial realpolitik that exists, let’s be real. If President Barack Obama can’t be seen as too gruffly treating white Americans vis-à-vis the Skip Gates situation, where he simply said that the policeman was acting stupidly—the uproar on that was incredible—what do you think will happen then if Eric Holder, as the first African-American attorney general, is seen to be going after mostly white CEOs and other corporate titans within the economic infrastructure? Now, it sounds great, on the one hand, because it is an acknowledgment of our adherence to rational principles of the defense of the poor and vulnerable, but in the real political context within which we exist, [we must appreciate] the pervasive character of race, how it has shaped the very lens through which we perceive these issues. And unfortunately, the optics on black men at the top—Barack Obama and Eric Holder—exercising a certain kind of aggressive posture toward these particular entities or individuals [should not be] underestimated…”

Now, forget for a moment, if you can, the epic nature of the financial crimes that Holder and Obama declined to prosecute: fraud, deception, and manipulation on a giant and pervasive and giant scale [6] that contributed to the loss of millions of jobs and to millions of foreclosures and a huge poverty spike. 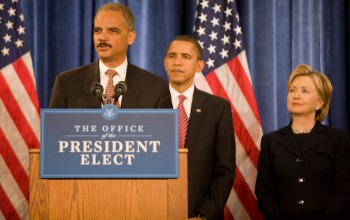 Eric Holder at the podium: As usual, too little, too late.

Forget also that Holder worked up the basic legal argument behind the federal government’s refusal and failure to prosecute Wall Street long before he became the first technically Black US Attorney General working for the first technically Black US President. In June of 1999, when Holder was a little-known attorney working for the corporate-neoliberal Bill Clinton administration, Holder published a remarkable memorandum [7] titled “Bringing Criminal Charges Against Corporations.” Despite its progressive-sounding title, the memo provided federal prosecutors a convenient argument to cite when deciding not to crack down on giant companies’ illegal conduct: consider the “collateral consequences” of prosecuting a large company. “In the corporate context,” Holder explained, “prosecutors may take into account the possibly substantial consequences to a corporation’s officers, directors, employees, and shareholders, many of whom, depending on the size and nature of the corporation have played no role in the criminal conduct…”

In other words, Holder argued that some corporations were just Too Big to Jail and so should not be charged. Ten years later, as Obama’s top lawyer in the wake of Wall Street’s greatest crime wave ever, Holder would absurdly use the Collateral Consequences doctrine [4] to justify not bringing charges even against specific individuals (criminal executives, that is) at large companies. This was no small amplification of the doctrine’s original meaning, but the basic Too Big to Prosecute idea was clearly in Holder’s head long before Dyson’s “racial realpolitik” might have come into play.

Consistent with the original Collateral Consequences idea and with the later amplification, Holder would spend the years between Clinton and Obama serving giant corporations at the posh Washington D.C. law firm Covington & Burling. There Holder represented such entities as the pharmaceutical colossus Merck, the National Football League, Chiquita Brands International, and the massive Swiss private bank UBS.

If the clownish academic and media personality Dyson seriously believes that Attorney General Holder wanted to prosecute Wall Street’s financial arch-perpetrators but was held back from doing so by his/and or the Obama team’s fear that they would spark white backlash if they went after super-rich white men, then he is sadly and badly mistaken. Holder is a wealthy, Ivy League-bred neoliberal and quintessential corporate Democrat going back to the Big Business-friendly Clinton administration [9].

But put all that all aside and ask yourself honestly: would Holder and his fellow black-bourgeois, deeply conservative friend Barack Obama [10] really have sparked devastating white backlash by moving assertively against the nation’s widely reviled financial overlords? It is probable that any white fear or anger that might have resulted from such serious prosecution of members of the United States’ super-wealthy .00002% would have been quite mild compared to the broader white and multiracial popular approval the US working class majority would have felt for Obama actually acting on his 2008 campaign’s progressive-sounding promises by responding seriously to the arrogance and corruption of the financial elite. Running dog Dyson is barking up the wrong bourgeois tree when he says that the nation’ mostly working class whites were too racist to let a technically Black administration stick it to white criminal plutocrats. Nonsense.

“Obama has, as predicted [11], been a disaster for racial as well for economic justice.”

But let’s pretend that Dyson is right to claim that the harsh racial realities of the US politics are such that a White House and a Justice Department headed by technically Black office-holders cannot undertake such an action. I think it’s a false and even idiotic premise, but imagine that it was accurate for a moment. An obvious question arises, at least it does for anyone who doesn’t want to live in a New Gilded Age of shocking inequality (racial as well as socioeconomic) where mind-boggling corporate and financial criminality goes unpunished: why then should US citizens of any color have joined Dyson in enthusiastically backing and defending a first technically Black president and a first technically Black Attorney General? What, just so we could applaud the symbolic gratification of putting Black Faces in High Places, as if that marked some sort of grand substantive victory over US racism? Sadly, as I and other anti-racists of the “radical left” warned and predicted from the beginning of the Obama phenomenon, the symbolic achievement has been little more than just that – symbolic. It has come at no small price to substantive movement against US racism deeply understood [12], for reasons and in ways that I and others have demonstrated elsewhere.

Obama has, as predicted, been a disaster for racial as well for economic justice. His presidency has, among other things, deeply reinforced the widely held white illusion that racism no longer provides a serious and pervasive obstacle to black advancement and racial equality in the US. As predicted, Obama has been nearly as silent about race and racism as any US president in recent memory. Along the way, he and his fellow black-bourgeois friends of white economic and power elite, like the civil rights charlatan Al Sharpton, have continued their nasty habit of blaming poor and working class Blacks [13], not institutional and societal racism, for Blacks’ persistent disproportionate presence at the bottom of the steep US socioeconomic pyramid. By the way, and for what’s it is worth, Sharpton’s speech along those victim-blaming lines at the funeral of Michael Brown in Ferguson, Missouri, was approvingly broadcast on Democracy Now [14] (DN) last August.

Funny story: I was booked to appear on DN in December of 2008 to discuss my book Barack Obama and the Future of American Politics – a book that pretty much predicted the broad power-serving trajectory of the Obama presidency on class injustice, racism, military empire (Dr. Martin Luther King, Jr.’s “triple evils [15] that are interrelated”) and more. The booking was cancelled on the day I was going to be interviewed, just 45 minutes before the taping, just as I stepped (riddled with the flu, I should add) out of the Port Authority in midtown Manhattan. Cleaning out my den the other day, I happened upon an old file in which I had placed some talking points for the DN interview that never occurred. One such point read as follows: “Obama will not prosecute Wall Street. Look out for the ‘liberal’ defense that doing so would spark white fears of the ‘angry black man.’”

Ajamu Baraka on Race, Class and Protest in...