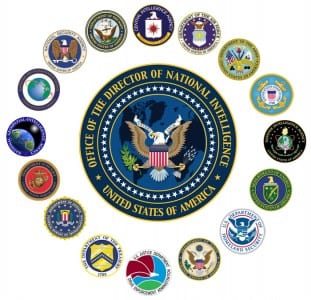 [W]ashington has 16 known US spy agencies. NSA and CIA are best known. Perhaps few Americans know much about the Defense Intelligence Agency (DIA).

It calls itself “first in all-source defense intelligence to prevent strategic surprise and deliver a decision advantage to warfighters, defense planners, and policymakers.”

It’s “part of an ambitious plan to assemble an espionage network that rivals the CIA in size, US officials said.”

Perhaps it includes covert domestic spying. CIA’s charter prohibits it. According to the ACLU, it “didn’t stop the (agency) from spying on Americans.”

It’s done it for decades. Post-9/11, it’s more stepped up than ever. Information sharing among US spy agencies and local law enforcement nationwide is official US policy.

The pretext is fighting terrorism. It’s a ruse. It’s about control. It targets dissent. It’s about advancing America’s imperium. It wants threats challenging it eliminated.

The Office of the Director of National Intelligence (DNI) is tasked with coordinating and overseeing intelligence community operations.

No matter what the pretext or excuses, the central purpose of these often redundant and overlapping intelligence agencies is to identify and neutralise dissent and any threats to the global rule of capital.

In 2008, the National Academy of Sciences said data-mining for terrorism methodologically was scientifically “not feasible.” It’s likely to severely infringe on civil liberties and other privacy rights.

WaPo said DIA’s being transformed “into a spy service focused on emerging threats and more closely aligned with the CIA and elite military commando units.”

When expansion’s completed, it’s expected to have around 1,600 “collectors.” They’ll operate globally.

Numbers are “unprecedented for an agency whose presence abroad numbered in the triple digits in recent years.”

Operatives include military attaches and others not associated with “undercover” work. Washington plans “a new generation of clandestine operatives.”

It’s part of a far-reaching trend. It reflects “convergence of the military and intelligence agencies that has blurred their once -distinct missions, capabilities and even their leadership ranks.”

DIA’s DCS combined with CIA, NSA, and other US intelligence agency growth “will create a spy network of unprecedented size.”

Doing so reflects Obama’s “affinity for espionage and covert action over conventional force.”

It’s about administration counterterrorism policies for sustained conflict. Pieces are being enhanced to do it.

General Flynn said realigning DIA won’t hamper congressional scrutiny. “We will have to keep congressional staffs and members in the loop,” he claimed.

Saying and meaning it are polar opposites. CIA does what it pleases. So do FBI and NSA. DIA’s no different. They’re rogue agencies. They do what they want.

According to US officials, transforming DIA’s “enabled by a rare syncing of personalities and interests among top officials at the Pentagon and CIA, many of whom switched from one organization to the other to take their current jobs.”

Speaking on condition of anonymity, a former senior Pentagon official said “(t)he stars have been aligning on this for a while.”

DIA has about 500 “case officers.” Plans call for doubling their numbers by 2018. “Cover” arrangements for hundreds of new spies will be created.

They’ll operate from US embassies and other locations. Perhaps they’ll be in neighborhoods near you. They could be stationed anywhere.

DIA plans global operations. It includes hundreds of diplomatic posts and other operations. Overt “positions will represent a declining share amid the increase in undercover slots, officials said.”

“Placing operatives in conventional military units means finding an excuse for them to stay behind when the unit rotates out before the end of the spy’s job.”

“Having DIA operatives pose as academics or business executives requires painstaking work to create those false identities, and it means they won’t be protected by diplomatic immunity if caught.”

On August 15, the Huffington Post headlined “Exclusive: Edward Snowden Says Media Being Misled ‘About My Situation.’ ”

He wants the record set straight. He said his father, Lon, attorney Bruce Fein, nor his wife and spokeswoman, Mattie , “represent (him) in any way.”

“It has come to my attention that news organizations seeking information regarding my current situation have, due to the difficulty in contacting me directly, been misled by individuals associated with my father into printing false claims about my situation.”

“I would like to correct the record: I’ve been fortunate to have legal advice from an international team of some of the finest lawyers in the world, and to work with journalists whose integrity and courage are beyond question.”

“There is no conflict amongst myself and any of the individuals or organizations with whom I have been involved.”

“Neither my father, his lawyer Bruce Fein, nor his wife Mattie Fein represent me in any way. None of them have been or are involved in my current situation, and this will not change in the future.”

“I ask journalists to understand that they do not possess any special knowledge regarding my situation or future plans, and not to exploit the tragic vacuum of my father’s emotional compromise for the sake of tabloid news.”

The ACLU’s been in contact with Snowden for weeks. At his request, it’s “playing a coordinating role to ensure that he receives appropriate legal advice and representation.”

“(W)e believe that the information Mr. Snowden has disclosed about the nature, scope, and putative legal authorization of the NSA’s surveillance operations has generated a remarkable and long-overdue public debate about the legality and propriety of the government’s surveillance activities.”

“The ACLU has long held the view that leaks to the press in the public interest should not be prosecutable under the nation’s espionage laws.”

It’s a noble tradition. Doing the right thing is its own reward.

Stephen Lendman lives in Chicago. He can be reached at lendmanstephen@sbcglobal.net.  His new book is titled “Banker Occupation: Waging Financial War on Humanity.”   http://www.claritypress.com/LendmanII.html.     Visit his blog site at sjlendman.blogspot.com.

Now even recognized by the New York Times: Cuba’s Impressive Role on Ebola