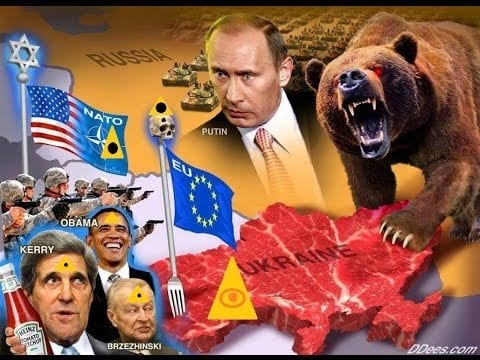 UPDATE: Here is a translation of Putin’s address at Valdai: http://eng.kremlin.ru/news/23137

[dropcap]T[/dropcap]oday at the Valdai International Discussion Club meeting in Sochi, Russia’s President Putin correctly and justifiably denounced Washington for destabilizing the world in order to serve its own narrow and selfish interest and the interests of the private interest groups that control Washington at the expense of the rest of the world.
It is about time a world leader denounced the thuggish neocon regime in Washington. Putin described Washington’s double standards with the Roman phrase: “What is allowed for God [the US] is not allowed for cattle [the rest of the world].”

Curiously, the Russian media has not, at this time of writing, produced an English translation of Putin’s full remarks. Perhaps the Russian media do not realize the importance of Putin’s words. Too much of the Russian media is owned by foreign interests who use the access to Russian readers to attack and discredit the Russian government. It is amazing that the Russian government allows Washington’s propaganda within its own ranks. Perhaps Moscow accepts Washington’s propaganda among Russians in order to protect the broadcasts in the US of RT, RIA, and Voice of Russia. But the balance is uneven. The Russian broadcasts in the West report otherwise unreported news; they do not defame America.

I did not see any reporting of Putin’s address in the US print and TV media. Clearly in the US there is an absence of public discussion of US foreign policy and foreign reaction to it. A country in which propaganda and silence rule out awareness and public discussion is not a democracy regardless of what it calls itself.

Today Washington’s target is Vladimir Putin. This is the height of folly and hubris. Putin’s public support far exceeds that of any American president in history. Currently, the level of public support for the Obama regime and the US Congress is far too low to be compatible with a functioning democracy. If the US is actually a democracy, it is the most dysfunctional democracy in world history. Practically no one, except the powerful private interest groups who own Washington, supports the US government. Everyone else despises Washington.

As the result of 13 years of murderous destruction of life and property in the Middle East and Africa, a dysfunctional and collapsing US economy, and a display of unrivaled arrogance, Washington has destroyed America’s soft power. Abroad only the deluded few and those paid by US-financed NGOs still have a good opinion of the United States.

In all world polls, the US ranks as the greatest threat to world peace. Washington has made our country a despised nation, and we the people have done nothing about it.

You would never know this from the US print or TV media or even from most of the UK and Western European media. As I reported on October 16, Udo Ulfkotte, a former editor of one of Germany’s most important newspapers, the Frankfurter Allgemeine Zeitung, has written a best-selling book in which he reports that the CIA owns everyone of significance in the major European media. In his own words Udo Ulfkotte says that he was “taught to lie, to betray and not to tell the truth to the public.”  http://www.paulcraigroberts.org/2014/10/16/cia-owns-everyone-significance-major-media/

As a former Wall Street Journal editor, Business Week columnist, columnist for the Scripps Howard News Service, columnist for a German magazine and French and Italian newspapers, I observed and experienced the gradual impoundment of any dissent from Washington’s line. It became clear that the path to journalism success in the West was to lie for the Establishment in Washington, largely a private establishment along with the dark off-budget “security” agencies bolstered by the neoconservative ideology of US world hegemony.

Much of Russian media and Putin’s advisors are fully aware of Washington’s media campaign to defame President Vladimir Putin. http://en.itar-tass.com/russia/756160 The internet site Russia Insider today asked the pertinent question: “Is the CIA Running a Defamation Campaign Against Putin?” As Russia Insider makes clear, the answer is most certainly. http://russia-insider.com/en/politics_media_watch/2014/10/24/04-54-03pm/cia_running_defamation_campaign_against_putin

Click the URL above and view the front pages of the UK Sun, Daily Mirror, and Daily Express. I would bet that these are front pages designed in Washington or Langley and are in fact paid ads by the CIA or National Endowment for Democracy or by one of the Republican or Democrat organizations that sponsor Washington’s overseas propaganda.

Of course, these UK rags can be dismissed as sensational junk comparable to the US versions that are for sale at grocery store checkout counters–”movie star abducted by aliens in UFO.” So scroll down the page of the above URL and look at the covers of Newsweek and The Economist. Once these were respected publications. Today I would bet that no one reads them and that they are dependent on CIA subsidies for their existance. Nevertheless, they impact the European, Canadian, Australian, and Japanese media and no doubt the media of other countries on the borders of the US empire. A number of gullible fools still think that America has a free press.

Be sure to notice this section of the report from Russia Insider:

“The issue of manipulation of news by intelligence services has been in the news recently with revelations that the CIA and German Secret Service (GSS) have long-running programs to influence how media executives and top journalists convey and interpret the news, including direct cash payments.

“Here are some examples they point to:

Portraying him [Putin] as a scheming dictator trying to rebuild a repressive empire.
Claiming he personally ordered the murder of a number of journalists, and personally ordered a KGB defector to be murdered with radiation poisoning.
Frequently citing unsubstantiated rumors he is having an affair with a famous gymnast.
Allegations that he has stashed away billions for his personal benefit, without providing evidence.
Recent article in newsweek claiming he leads a luxurious and lazy lifestyle, sleeping late.
Recent article in NYT focusing on a supposed personal arrogance.
Hillary Clinton mentioning in speech after speech that he is a bad guy, a bully, that one must confront him forcefully.
Frequently using pejoratives to describe his person – “a jerk and a thug” (Thomas Friedman this week in the NYT)
Mis-quoting him on his regret about the collapse of the Soviet Union.
Articles about a supposed super-luxury villa built for him in southern Russia.
The over-the top headlines in the western media (they were worst of all in Germany) portraying him personally responsible for murdering the victims of MH17.
And soft stuff – magazine covers making him look sinister, monstrous, etc.”

If you are not already aware, I am pleased to introduce you to The Saker, a pseudonym for a high level US military analyst who lives in Florida. No, it is not me. Be sure to read the interview with Saker, which is at the bottom of the article: http://russia-insider.com/en/politics_media_watch/2014/10/24/04-54-03pm/cia_running_defamation_campaign_against_putin

Every day readers ask me what they as individuals can do. Some possibly are government trolls who hope I will answer “overthrow the government” so that I can be arrested as a terrorist. My answer to the question is that people are powerless until enough of them are informed. If people become informed and will take a stand, then the people can force the government back under their control. If this does not or cannot happen, democracy in America is dead, and our life as a free people protected by the Constitution and law against the power of the state is finished.

Possibly America is already finished and will now finish the rest of the world in its insane neoconservative drive to establish Washington’s hegemony over the entire world. Russia and China are not going to submit to being Washington’s vassals and India had enough of being a colony under Great Britain. If the crazed hegemons in Washington persist, nuclear war will be the outcome.

To vote or not to vote: that IS the question

THE HEAD OF PUTIN