Lies of the empire: Chuck Hagel on ISIS, Assad (Annotated) 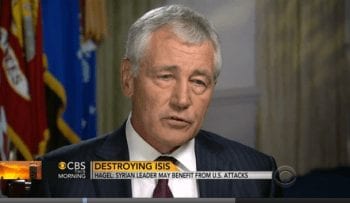 Chuck Hagel: Assad “indirectly benefiting” from war on ISIS
Main lies the empire would like you to take away from this interview:
• The ISIS menace, it’s all Assad’s fault. “His brutality did it.”
• We’re just peace-loving folks trying to do the right thing and clean up other tyrants’ messes.
BELOW WE PUBLISH SOME COMMENTS TO THIS CLIP BY CBS NEWS WATCHERS

FOR THE RECORD | The most outrageous lie is in red.
Official CBS copy attached to this clip:

In an interview at the Pentagon Wednesday, Defense Secretary Chuck Hagel spoke about military action in Iraq and Syria against militants from the Islamic State of Iraq and Syria, or ISIS, calling it a long-term challenge focused on destroying the terrorists, not ousting Syrian President Bashar Assad, “CBS This Morning” co-host Charlie Rose reports.

“Is Assad being benefited, helped by what we’re doing, other countries against ISIL? He’s indirectly benefiting,” Hagel said, using an abbreviation for another name for ISIS, the Islamic State of Iraq and the Levant. “But here, let’s review the landscape here, why has all of this occurred? This has all occurred because over the last three years, Assad – his brutality, his lack of responsible government, his legitimacy in governing, what he’s done to his own people – has produced this.”

Hagel called this one of the most challenging periods in history for American leadership.

“I think our capacity is different because the threats and the challenges are far more diffuse and varied,” he said. “I talked about asymmetric threats. I mean, the sophistication of ISIL, just take that for a moment. We’ve never seen an organization like ISIL that is so well-organized, so well-trained, so well-funded, so strategic, so brutal, so completely ruthless.”

“We’ve never seen anything quite like that in one institution,” Hagel said. “And then they blend an ideology, which will eventually lose, we get that, and social media.”

He noted the group’s online strategy has made it even more of a threat.

“The sophistication of their social media programis something that we’ve never seen before,” Hagel said. “You blend all of that together, that is a incredibly powerful new threat.”

As for Russia, Hagel said the country’s increase in military activity may have more to do with the larger role President Vladimir Putin wants to play in the world rather than issues with Ukraine.

“Well, there’s no question that the Russians have upped their military activity many times over the last couple of years,” he said. “Unfortunately President Putin sees and has said it, that he just doesn’t accept a world order as it is.”

OUR COMMENT: Hagel, a Viet vet himself, and a guy who at one point was hailed by many liberals as an improvement on his predecessors, “since he knew the ugliness of war,” apparently turns out no different and probably just as bad than his fellow imperial pawns. Hagel apparently has learned nothing.

Defense Secretary Chuck Hagel calls this one of the most challenging periods in history for American leadership. In an interview at the Pentagon, Charlie Rose asked Hagel about military action in Iraq and Syria against ISIS militants.