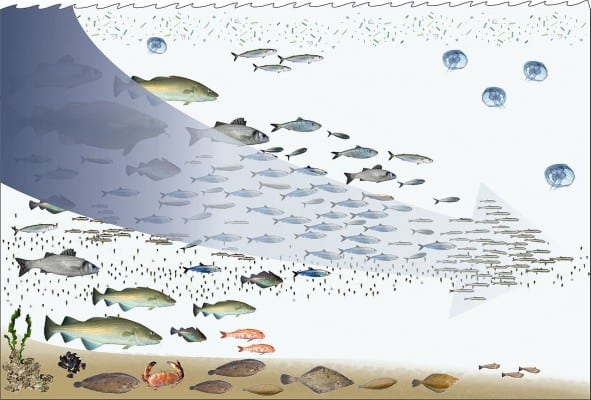 Fishing down the foodweb is being done with impunity, as the practice is defended by well-entrenched interests. (1)
CLICK ON IMAGES TO ENLARGE

[dropcap]M[/dropcap]assive human depopulation resulting from our misguided actions may be necessary to finally prompt humanity to end capitalism and stop the Sixth Mass Extinction in which we find ourselves, a man-made die-off now threatening all species on earth including our own.

Scientists believe we are now witnessing the sixth mass extinction in the Earth’s history. In the past 450 million years there have been five occasions when 90% of the Earth’s species, then extant, were wiped out.

The difference between the current Sixth Mass Extinction and the other five is that those were the result of cosmic cataclysisms. This one is the result of the activities of a single Earthbound species : Humans.

Human activity proves us to be a parasitic species which destroys almost everything we touch. In just the past 40 years we have killed off half of all life on Earth. Almost three-quarters of the world’s forests are now gone. Thousands of species of flora and fauna are going extinct every year.

We pollute the air, the seas, warm the atmosphere and the oceans, clearcut the very lungs of the Earth, the rainforests.

We murder a billion animals a week in slaughterhouses, we imprison billions more. We kill half a TRILLION sea creatures annually.

The Quaternary period saw the extinctions of numerous predominantly larger, especially megafaunal, species, many of which occurred during the transition from the Pleistocene to the Holocene epoch. Among the main causes hypothesized by paleontologists are natural climate change and overkill by humans. Image: Wikimedia Commons

We are a scourge upon the planet.

Most all of the damage we inflict upon the world is driven by capitalism, by the pursuit of profit, by businesses.

Capitalism requires an unending supply of raw materials, an inexhaustible flow of trees, oil, gas, animal corpses and live consumers. It operates as though there is no end to the Earth’s tolerance to be raped and plundered.

Humans can be beautifully creative, yet brutally inconsiderate at the same time of the world they live in and share with other creatures. It’s precisely our uncanny intellect and creativity – which we’re so proud of and which are often trumpeted as key differential qualities that separate us from beasts – that is dooming this planet. Because our technology and means of manipulating resources have evolved so rapidly, few species can keep up. A growing number of ecosystems are faced with situations where the environment is no longer predictable, either because of direct human interference (deforestation, loss of habitat, pollution) or indirect, through global warming (shorter seasons, droughts, ocean acidification, and so on). (ZME Science)

The most immediate threat we face is the consequence of unbridled carbon and greenhouse gas emissions, which are warming the planet.

The ecoanimal cause is not so much anymore about being kind to animals or, as many critics will say, “mushy in the head” for holding such “wild ideas” as thinking that we act as tyrants toward all non-human creatures—which is indisputable fact. It is now a matter of controlling and eventually eliminating our deranged ability to wound and kill the planet as a platform for all life, including our own. While many on the left still look askance at being asked to join the animal defense movement, they cannot so easily refute the call to protect the planet, which is a core position for any radical environmentalist, ecoanimalist, or self-respecting leftist.(2)

If we survive climate change we will likely do so as a much smaller world population. Billions of people are at risk of dying because of climate change, from myriad causes: starvation, disease, riots, wars.

No compassionate person could turn away from those who will be affected. Which drives liberals and socialists to work tirelessly to stop global warming.

But the Earth will probably be better off with a radically reduced human population. And the social upheaval occasioned by climate change will help to destroy capitalism.

As coastal areas are lost to the seas, as crops fail due to severe weather, as tropical storms and hurricanes kill millions of people, the realization that this is the result of capitalist greed will finally dawn on the human race.

Climate change will be the catalyst for the establishment of socialism around the world.

The great tragedy is that those who will do the dying are not the ones who caused the problems. The billionaires and the oligarchs have a much better chance of survival than do the rest of us. And the greatest number of victims of climate change will be those who have been victims of capitalism: the impoverished in the Third World.

In its death throes, capitalism will again exact a toll on its victims.

* The Holocene extinction, sometimes called the Sixth Extinction, is a name proposed to describe the extinction event of species that has occurred during the present Holocene epoch (since around 10,000 BCE) mainly due to human activity.

(1)  The journal Science published a four-year study in November 2006, which predicted that, at prevailing trends, the world would run out of wild-caught seafood in 2048 or sooner. The scientists stated that the decline was a result of overfishing, pollution and other environmental factors that were reducing the population of fisheries at the same time as their ecosystems were being degraded.

(2) The usual objection by leftists is that the Left has other “more important priorities” to attend to instead of protecting animals. For reasons already amply explained on many scientific forums, the ecoanimal (environmental systemic) question cannot be regarded as secondary any more, if it ever was. The left must tackle such issues along with the push for global revolution. Further, the old idea about putting man at the center of all priorities, being “the measure of all things,” a humanist concept that made some sense in the 18th and 18th century as a reaction to the stifling powers of religion and king, no longer applies. Such notions are now superseded by politico-historical shifts, placing them on the road to obsolescence as a form of “superhumanism” no longer sustainable morally, philosophically or politically.