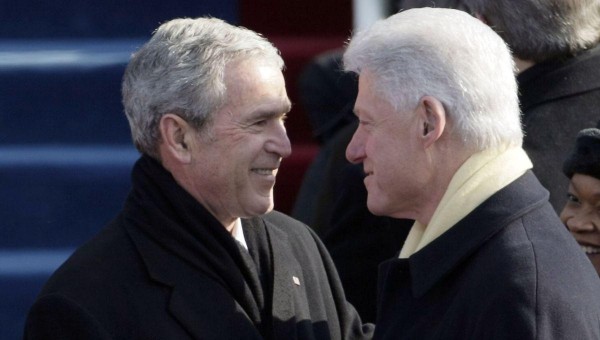 Watching the Clintons and Bush’s kiss each other’s butts is about as nauseating as anything happening today. Bush the lesser is calling Hillary his sister in law because Bill is “his brother.” Bill plays golf with good buddy daddy Bush. The Democratic faithful, who line up to vote for any scumbag named Clinton should ask why the Clintons hang out with right wingers nearly all of the time they are not hanging out with dictators like Mubarak.

By Timothy Cama, The Hill

[dropcap]F[/dropcap]ormer President George W. Bush said in an interview Sunday that Hillary Clinton is like his sister-in-law, and she’d make a formidable opponent in a presidential race against his brother, Jeb.

But Jeb could nonetheless run against Clinton and beat her, George W. Bush said with little hesitation.

“Very much so,” George W. Bush said when Candy Crowley, host of CNN’s “State of the Union,” asked if Clinton is formidable.“No question. So is he, though,” he said of Jeb.

George W. Bush’s near-familial relationship with Clinton come thanks to the close relationships between the families. Bill Clinton beat Bush’s father in the 1992 presidential race, but the Bushes and Clintons are on friendly terms. 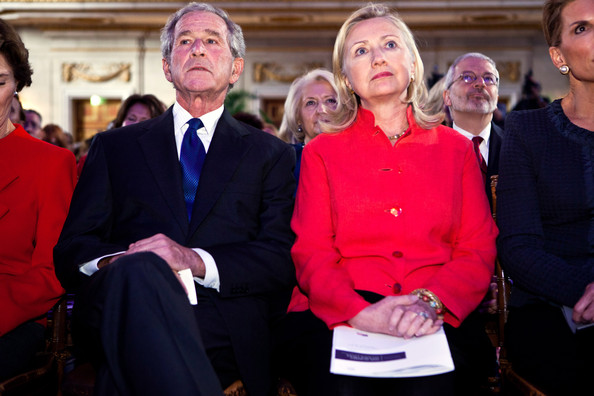 All war criminals: and helping each other rehab their tarnished images. (With the help of the presstitutes.)

George W. Bush has referred to Bill Clinton as his “brother from another mother,” leading to his conclusion that Hillary must be his sister-in-law.

George W. Bush said he would “absolutely” bet on Jeb beating Hillary if both run for president.

Earlier in the interview, George W. Bush repeated his stance that Jeb should run. But the former president said he has no clue where Jeb stands on the issue.

George W. Bush also had no guess as to whether Clinton would run.

“But I know this — that like Jeb, she knows what it’s like, and she’s taking her time,” he said, adding that the recent birth of her first grandchild is “a new complicating factor” in her decision.