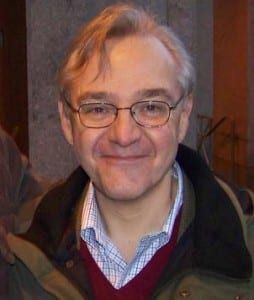 Washington Post columnist E. J. Dionne is one of the tiny and dwindling number of “social-liberals” who have failed to see that social-liberalism is a dead letter in American politics due to its abandonment by the American ruling class–who no longer see any utility in it for protecting their profits–and their abandonment by the American working class who long ago figured out that social-liberals always become anti-labor pro-capitalist imperialist war mongers when they gain power.

However, in the following column he does score one brilliant observation–one that genuine socialists figured out years ago!–when he says:

“It’s odd that so many continue to see Obama as a radical and a socialist even as the Dow hits record levels and the wealthy continue to do very nicely. If he is a socialist, he is surely the most incompetent practitioner in the history of Marxism.”

In fact, however, Dionne’s essay–published in the Post–how to achieve a healthier democracy, fails, as social-liberals always must, to deal with the essential question of how one would achieve the social-democratic-lite formula he touts given the fact that the billionaire ruling class holds an iron-grip over the government and state through their dictatorship.

Of course the answer to that question is obvious: in a totalitarian dictatorship dedicated to ensuring that the ruling class continues to reap high profits regardless of the human cost, under a dictatorship that long ago decided to shut down every avenue for reform, only one route remains for achieving even the mild reforms recommended by Dionne: revolution and the overthrow of the plutocratic dictatorship.

C.A. DRISCOLL is an American political activist and cultural/media critic. He is currently involved with the ELECTION BOYCOTT ADVOCATES project.

BELOW, THE ORIGINAL PIECE, IN TOTO, SO OUR READERS MAY JUDGE FOR THEMSELVES.

E.J. Dionne: To a healthier democracy

Meg Greenfield, the late Post editorial page editor, counseled against writing in “High C” all the time. By this she meant that an editorialist or columnist who expressed equally noisy levels of indignation about everything would lack credibility when something truly outrageous came along that merited a well-crafted high-pitched scream.

We now seem to be living in the Age of High C, a period when every fight is Armageddon, every foe is a monster, and every issue is either the key to national survival or the doorway to ruin.

This habit seems especially pronounced in the way President Obama’s adversaries treat him. It’s odd that so many continue to see Obama as a radical and a socialist even as the Dow hits record levels and the wealthy continue to do very nicely. If he is a socialist, he is surely the most incompetent practitioner in the history of Marxism.

The reaction to Obama is part of a larger difficulty that involves pretending we are philosophically far more divided than we are. In all of the well-off democracies, even people who call themselves socialists no longer claim to have an alternative to the market as the primary creator and distributor of goods and services. The boundaries on the left end of what’s permissible in the public debate have been pushed well toward the center. This makes the hysteria and hyperbole all the more incomprehensible.

But let’s dream a little and assume that the American left signed on to the proposals put forward by Lane Kenworthy of the University of California-San Diego in his challenging (and, by the way, very pro-market) book “Social Democratic America,” published this year. Kenworthy’s argument is that we can “successfully embrace both flexibility and security, both competition and social justice.”

His wish list is a straightforward set of progressive initiatives. A few of them: universal health insurance and early education, extensive new help on job searches and training, a year of paid parental leave, an increased minimum wage indexed to prices, expansions of efforts that supplement wages such as the Earned Income Tax Credit, and the government as an employer of last resort.

His program, he says, would cost around 10 percent of our gross domestic product. Now that’s a lot of money, and the debate about whether we should spend it would be anything but phony. Yet would such a level of expenditure signal the death of our constitutional system? Would it make us like, say, Cuba? No and no. It might make us a little more like Germany, the Netherlands or the Scandinavian countries. We can argue if we want to do this, but these market democracies happen to share with us an affection for freedom and enterprise.

And when it comes to High C, there’s nothing quite like our culture wars, in which disagreements about social issues are seen as battles between libertines and bigots. When I look around, I see a lot of liberals who live quite traditional family lives and even go regularly to churches, synagogues and mosques. I see a lot of conservatives who are feminists when it comes to their daughters’ opportunities and who oppose bigotry against gays and lesbians.

The ideological resolution I’d suggest for the new year is that all sides stop fighting and pool their energies to easing the marriage and family crisis that is engulfing working-class Americans.

This would require liberals to acknowledge what the vast majority of them already practice in their own lives: that, all things being equal, kids are better off with two loving and engaged parents. It would require conservatives to acknowledge that many of the pressures on families are economic and that the decline of well-paying blue-collar work is causing huge disruptions in family formation. I’d make a case that Kenworthy’s ideas for a more social democratic America would be good for families, but let’s argue it out in the spirit of a shared quest for remedies.

Maybe it’s asking too much, but might social conservatives also consider my friend Jonathan Rauch’s idea that they abandon their campaign against gay marriage in favor of a new campaign on behalf of the value of committed relationships for all of us?

Disagreement is one of the joys of freedom, so I am all for boisterous debate and tough political and philosophical competition. It’s how I make my living. But our democratic system would be healthier if it followed the Greenfield rule and reserved the harshest invective for things that are genuinely monstrous.

ABOUT E.J. DIONNE
E.J. Dionne writes about politics in a twice-weekly column and on the PostPartisan blog. He is also a senior fellow in Governance Studies at the Brookings Institution, a government professor at Georgetown University and a frequent commentator on politics for National Public Radio, ABC’s “This Week” and NBC’s “Meet the Press.”