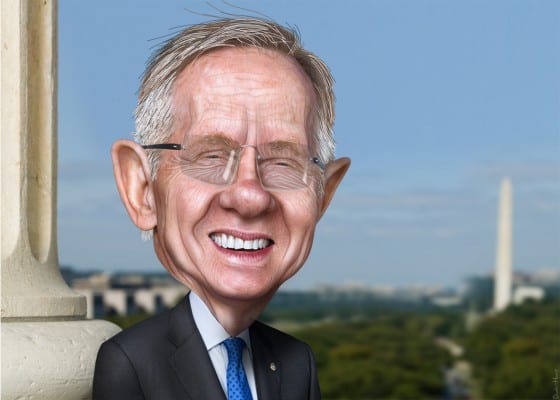 I have a soft spot for Harry Reid. Not for his politics, which remain mostly retrograde, but for the man. He is pugnacious and unvarnished, a real street fighter. Reid has a voice like scratched vinyl, but he is a straight shooter, who rarely speaks cryptically. When he takes a stand, he doesn’t flinch under fire.

In a time of political clones, Reid is an original, a working-class Westerner, whose mother, Inez, was a laundress and father a miner, who later killed himself during a period of prolonged unemployment. Reid grew up in the desert outpost of Searchlight, in a company hovel without a toilet or a telephone. He put himself through college and law school and clawed his way through the hard-scrabble terrain of Nevada politics from the ground up.

In sum, Harry Reid embodies every quality Barack Obama lacks. Thus it didn’t surprise me much that Reid dumped most of the blame for the annihilation of the Democrats in the mid-term elections at Obama’s doorstep. Obama, as if paralyzed by some deep psychological fissure, simply refuses to battle for his own policies, even when the fate of his own party hangs in the balance. Reid, the former boxer, can’t stomach such timidity at times of crisis. He is right about Obama, if not for all the right reasons.

For his part, Obama, visibly dazed by the losses, inexplicably cast blame on Latinos and blacks, slamming the low turnout among minority voters. He all but called them lazy and ungrateful. One might be tempted to read this bizarre outburst as a kind of subliminal self-loathing, a form of toxic projection. There is a vindictive quality to the Obama persona that strikes out most viciously at those who he believes should love him the most.

Blacks and Hispanics were righteously irked by the president’s callous condemnations. After all, the turnout from white progressives, women and unionists was equally deflated. Still they should have taken credit for the debacle. After all, they’ve endured the most savage body blows from the Obama incumbency across the past six bleak years.

Even after the coast-to-coast trouncing, Obama remained in a desultory state as he plotted his next move, the president as somnambulist. Rarely has a major political figure taken such pride in thinking long and deeply over policy matters only to arrive at dumb and uninspired decisions.

Take Obama’s post-election executive action on immigration, a move he should’ve made years earlier. At best it was a half-measure, which explicitly exempted the more than two million people deported by Obama himself. This was followed by Obama’s timorous and inchoate response to the outrageous grand jury decision not to indict Darren Wilson for shooting Michael Brown to death in cold blood. Blacks and Hispanics have many reasons to feel enraged about the president’s indifferent attitude toward the cruel circumstances of their lives.

The Democrats’ death embrace with neoliberalism has gone almost unchallenged since the rise of Jimmy Carter in the 1970s, the grip tightening with each successive election. Now it has all but strangled the life out of the party. The victims of neoliberalism once constituted the popular base for the party. Now the Democratic Party has become a tomb for its ancient New Deal factions and all the hedge fund dark money in the world won’t summon the old troops back to life.

In their place, the mandarins of the DNC have welcomed some of the most malign forces on the American political scene: bond traders and venture capitalists, dot.com tycoons and arms manufacturers, private equity sharks and union-busting CEOs, nuclear energy zealots and the shock troops of the Israel lobby, who have systematically smothered out any voices defending the aspirations of the Palestinian people. We have officially entered the age of SurrealPolitik.

Even though the prickly word “inequality” rarely surfaced in the fall campaigns, it’s almost an inviolate rule of American politics that all elections, when you drill into the deep strata of the mindset of the electorate, are about the economy. Obama’s recovery is an illusion manufactured by shopworn parlor tricks from the Federal Reserve. Few are buying it any more. The economy remains entropic, the heat steadily leaking away. The mood of the nation is sour. The country is mired in a kind of slow-motion dissolution.

But I am ever the optimist. I think this election was about more than the dismal economic circumstances. I believe the election was a mass expression of contempt: for Obama, for the Democrats, for the whole rancid system that promises hope and delivers only deprivation and more war. Sooner or later the bill for these betrayals comes due. A price must be paid.

The contradictions of the Democratic Party have reached the cracking point. Who would defend a party that refuses to defend its own most vulnerable adherents? Who would join a party that sedulously squelches each new spark of idealistic fervor, from Occupy Wall Street to the Dream Defenders, to the $15 an Hour movement, while maniacally pursuing job-killing trade pacts like the TPP? It should be torn asunder, before it collapses from its own internal state of decay.

Barack Obama offered himself as an outsider, a new kind of political figure, who would challenge the prevailing forces of corporate thievery and military adventurism. In the end, he proved to be their unapologetic agent.

That then is the tragedy of Obama, the president who wouldn’t stand his ground. From his fall, let a new resistance rise.

ABOUT THE AUTHOR
Jeffrey St. Clair is editor of CounterPunch. His new book is Killing Trayvons: an Anthology of American Violence (with JoAnn Wypijewski and Kevin Alexander Gray). He can be reached at: sitka@comcast.net.

Surabaya Mourning Air Asia Victims But Not Its Poor

Can a Global Revolution Be non-Violent?