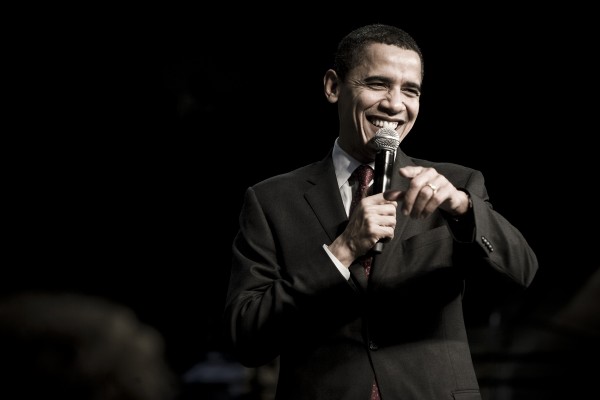 Obama the perennial snake charmer. After him, others will crop up to take his place in the grand project of deluding the American people. (Via Joe Crimmins, flickr)

The delusional character of Obama’s State of the Union address on Tuesday—presenting an America of rising living standards and a booming economy, capped by his declaration that the “shadow of crisis has passed”—is perhaps matched only in its presentation by the media and supporters of the Democratic Party.

The general tone was set by the New York Times in its lead editorial on Wednesday, which described the speech as a “simple, dramatic message about economic fairness, about the fact that the well-off—the top earners, the big banks, Silicon Valley—have done just great, while middle and working classes remain dead in the water.”

The attempt to present Obama’s remarks as a clarion call to combat social inequality runs first of all into the inconvenient fact that the individual supposedly making this call has been the head of state for the past six years. The Times writes as if the policies of the Obama administration—the multitrillion-dollar bailout for the banks, the coordinated assault on wages, relentless cuts to social programs and the social counterrevolution in health care known as Obamacare—have nothing to do with the record levels of social inequality that prevail in the United States.

The Times quotes Obama’s question delivered toward the beginning of the speech: “Will we accept an economy where only a few of us do spectacularly well? Or will we commit ourselves to an economy that generates rising incomes and chances for everyone who makes an effort?”

Anyone listening to the speech with even a passing knowledge of the record of his presidency would immediately respond that, for Obama and for the entire political establishment that he heads, the answer is clearly the former.

As for the proposals themselves—including tuition assistance for community colleges, tax credits for child care and college education, an increase in the minimum wage and paid maternity leave—they consist of insincere and paltry measures, tailored to the interests of big business, that no one, least of all Obama, expects will pass.

The Times itself acknowledges, “Mr. Obama knows his prospects of getting Congress to agree are less than zero.” White House officials freely admitted ahead of the State of the Union that Obama had no expectations that the measures he proposed would be taken up on Capitol Hill. “We will not be limited by what will pass this Congress, because that would be a very boring two years,” White House senior adviser Dan Pfeiffer told the press before the speech.

Previous State of the Union speeches have produced similar wish lists aimed at generating illusions that Obama sought to advance a “progressive” agenda, proposals dropped as soon as the president completed the obligatory tour of photo-ops and speeches at college campuses.

In his 2014 State of the Union, Obama called for ending tax loopholes for corporations that ship jobs overseas, investing tens of billions in infrastructure projects to create jobs, making pre-kindergarten available to every four-year-old child, regardless of family income, and enacting equal pay for women. Instead, one million people were cut off food stamps, long-term unemployment remained stubbornly high, poverty increased, and wages stagnated.

On the other hand, every major initiative by Obama in domestic policy—the 2009 stimulus program, the 2010 health care reform legislation, the 2010 financial regulatory overhaul, countless budget deals with the congressional Republicans, right up to the executive order on immigration issued a month ago—was dictated by the needs of corporate America, and, in many cases, drafted by corporate lobbyists.

The consequences for working people—record long-term unemployment, a tidal wave of home foreclosures, the slashing of wages in basic industry, the steady decline in living standards over all—were not accidental. They were the deliberate goal of government policy, for both Democrats and Republicans, because mass suffering by the working class was required to obtain the resources needed to bail out the financial aristocracy.

The main purpose of Obama’s remarks was to give the various publications and organizations that orbit the Democratic Party—the Times, the Nation magazine (whose columnist John Nichols described the speech as a “serious effort to address income inequality”), the trade unions, and the network of pseudo-left organizations that present themselves as “socialist”—fodder for promoting the Democrats in the 2016 elections.

Thus, Obama’s speech was peppered with references aimed at the upper-middle class practitioners of various forms of identity politics (Time magazine, for example, enthused that Obama “made history Tuesday night” by the inclusion in his speech of one word: “transgender”).

The delusions, self-delusions and lies of Obama and his supporters cannot, however, alter the underlying reality of American political life: the unbridgeable gulf between the entire state apparatus and the vast majority of the population. It is notable that Obama’s speech, delivered less than three months after the midterm elections, made no reference to the debacle that the Democratic Party suffered at the polls—due primarily to the collapse in voter turnout produced by six years of right-wing policies from the “candidate of change.”

Perhaps the most striking delusion of all is the belief by the ruling class and its representatives that it can, through a few honeyed and lying phrases, forestall the tidal wave of social opposition that is on the horizon.

The authors are senior editors with wsws.org, information instrument of the Social Equality Party (SEP).

What the ruling class says is irrelevant

DEATH BY A THOUSAND CUTS: EARTH ENTERS THE ‘DANGER ZONE’

THE AUSTRALIAN CHEWING-GUM IS NOW ON THE RUSSIAN...